Why can you see a light in the location that the light source just left?

This is my first question on this site so forgive me for the awkward wording of the question. Basically, my question is why does light from, say, a sparkler, seem to remain where it just came from to you EYE? I attached a sample photograph and i understand that cameras work differently in that they're designed to "retain" light so to speak.

But why does the human eye have a similar, albeit less dramatic effect? 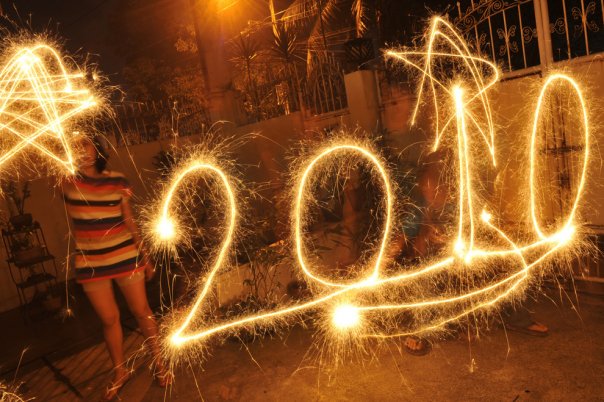 The human eye is actually quite similar to a camera. It also requires a finite exposure time to build up sufficient photon signal. If the source is moving over that time (typically about 0.1 sec for human eye), it will be blurred out over the exposure.

The human retina and visual perception system of the brain display in combination what is known as "persistence of vision." The eye and brain retain a visual image for somewhere between 1/30th and 1/25th of a second, or even longer for especially bright images. See: the Wikipedia entry on Persistence of Vision and the page on The Nature of Visual Perception by the Center for Visual Computer at Stonybrook.

Some attribute persistence of vision only to the retina, and some attribute it to the visual processing system in the brain, specifically to what is known as iconic memory. But no one knows for certain what causes this phenomena at this time.

NOTE: Even the wikipedia entry says that: "Some scientists nowadays consider the entire theory a myth" which is confusing because if one follows the reference for this statement, one reaches the link above from Joseph and Barbara Anderson which clearly is talking about movement perception only and not the general idea of perception of vision.

Not the answer you're looking for? Browse other questions tagged visible-light biophysics vision or ask your own question.

37
Why can you see virtual images?
3
Can an invisible light source cast shadows?
8
How photons represent colors that you see?
15
Why can't we see infrared light?
0
If color is just reflection of light, then can someone's purple look red to others?