Is illuminance defined only on a surface normal to the flux?

Assuming on the below image the source is a point source, I can understand that since the light flux falls on dA is the same within the solid angle and since the intensity I = Φ/dω and E = Φ/dA it can be deduced that E = I / d^2(I am not clear about d here. I can understand d to be the distance from the point source to the dA and not to the horizontal surface A). 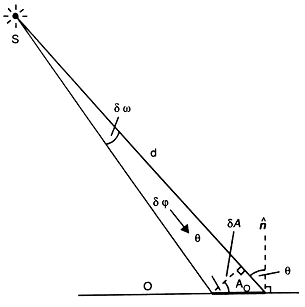 But I don't seem to understand and give the same reasoning for the illumination E in the horizontal surface plane A. Does illumination on A equals E = Φ/A? That is, equal to that of dA? If yes it then seems to be possible to conclude E = I*cosθ/d2 for surface A(and again here I am not quite clear about d; is it the distance to the surface A as it's shown on the image? or is it the distance on the definition of the solid angle dω which is from the source perpendicular to dA?).

My confusion has risen from this sentence I read in Image Acquisition book on describing irradiance(would be the same concept in photometry):

Another very important distinction is that irradiance describes the flux per unit area that is perpendicularly incident(normal) to a surface. Hence, while radiant incidence has the same units as exitance, it is of a different nature. Existance ignores the direction taken by the exiting flux, whereas irradiance implicitly takes account of the flux component, which is normal to surface. If the flux direction is not normal, then the value of the radiant incidence must be modified to be the perpendicular component of the angularly incident flux density.

I don't understand what that quote is getting at. At best it's confusing, and at worst it's wrong. From Wikipedia:

Clear enough. No mention of perpendicularity.

Not the answer you're looking for? Browse other questions tagged visible-light lightning or ask your own question.

1
Which fraction of light is refracted from a source of light under a lake?
0
Polarized light from any surface?
1
Would a camera that only takes light at 90 degrees work?
1
Moon illuminance during the day
1
Understanding Incident/Exitant Radiance
2
Why do we need to define both luminous intensity and illuminance?
3
Why farther objects do not look dimmer?
1
Angles of Refraction,Internal reflection and incidence