What is the cosmological redshift of SN 1987A?

I haven't found any literature on SN 1987A, which provides me with its cosmological [not gravitational, wrong in inital question, thanks for the remark] redshift. Is it larger or smaller than $z=0.1$, the "time" after which the universe started to accelerate?

SN 1987A is (was?) in the Large Magellanic Cloud, which is gravitationally bound to the Milky Way. This means that its motion relative to us is only minimally affected by cosmological expansion, and talking about it in terms of a $z$ parameter is misleading at best.

The best estimates of the distance to SN 1987A are about 168,000 light-years. If you really wanted to assign a $z$ value to it, you could take the Hubble parameter $H_0$, find the velocity that an object 168,000 light-years away would have in the absence of significant gravitational forces, and divide by $c$: $$ z = \frac{v}{c} = \frac{H_0 d}{c} = 1.16 \times 10^{-5}. $$ (This calculation uses the most recent Planck estimate of $H_0$ of 67.8 km/s/Mpc.) But, as noted above, if you actually measured the redshift of SN 1987A, you would almost certainly get a different value from this due to its particular motion within the Large Magellanic Cloud and due to the particular motion of the Large Magellanic Cloud relative to the Milky Way.

Addendum: Regardless of whether one can assign a $z$-value to SN 1987A, though, you are probably justified in saying that the supernova occurred well after the acceleration of the Universe became significant.

The Magellanic clouds are satellite galaxies of the Milky Way. They are right next door. Google says 61 kPc to the LMC which means trivial cosmological redshift.

Of course you won't find it anywhere - SN 1987A is in the Large Magellanic Cloud, just 168000 ly away. At this scales cosmological expansion is negligible compared to other processes so measuring its redshift is says little useful about its distance.

$z=0.1$ corresponds roughly to 1 Gly. The universe is HUGE. Here's plot from wikipedia 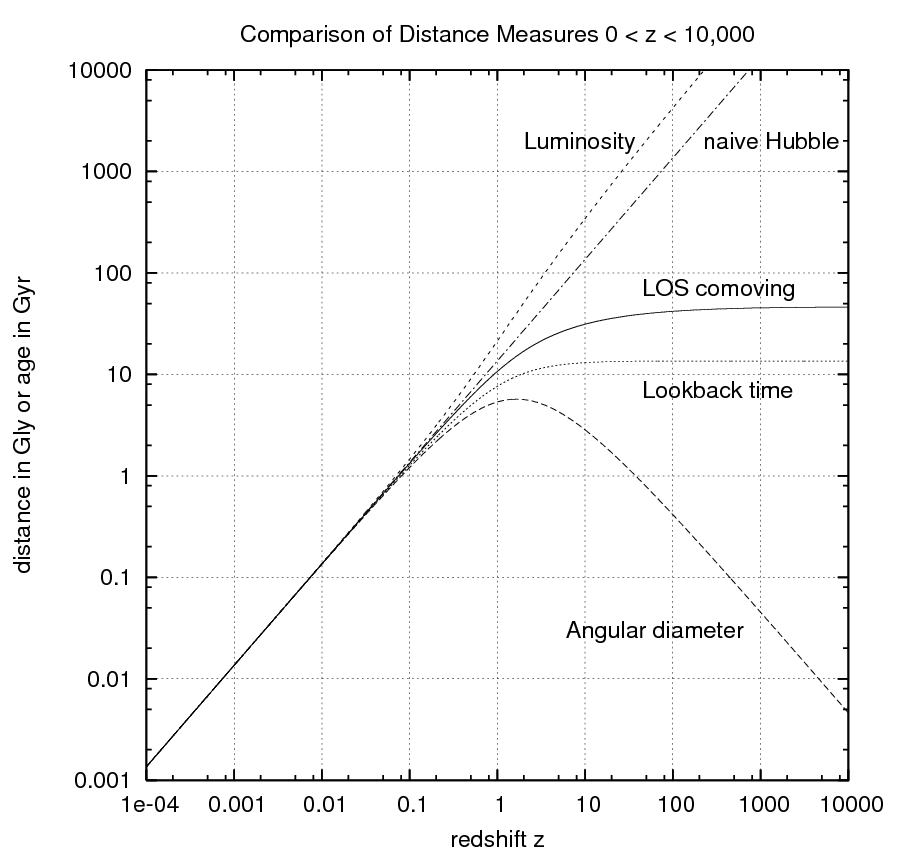 Not the answer you're looking for? Browse other questions tagged cosmology astronomy supernova gravitational-redshift or ask your own question.