What is the difference in the uses of $\omega t$ and $kx$ in wave equation?

I understand that the everything within the bracket in the equation is an angle. But I dont understand what is the difference between those terms. When do we use $\omega t$ and $kx$ and $\phi$?

NOTE: I read this and this Phys.SE questions but they don't take into account the $kx$ term in their phase.

The first problem you might have with the wave equation is to visualise the graph.
This is because the displacement of a particle in the medium through which the wave is travelling $y$ depends on both position $x$ and time $t$.
So you need to draw a 2D graph on a 2D computer screen and then this not even take care of a 3d wave with position $(x,y,z)$ and time $t$.

Two ways which are used to describe a wave is to keep one of $x$ and $t$ and draw the appropriate graph(s) of $y$ against $t$ at a fixed position $x$ or $y$ against $x$ at a fixed time $t$, equivalent to taking a photograph of the wave.

Drawing these graphs out you get the following: 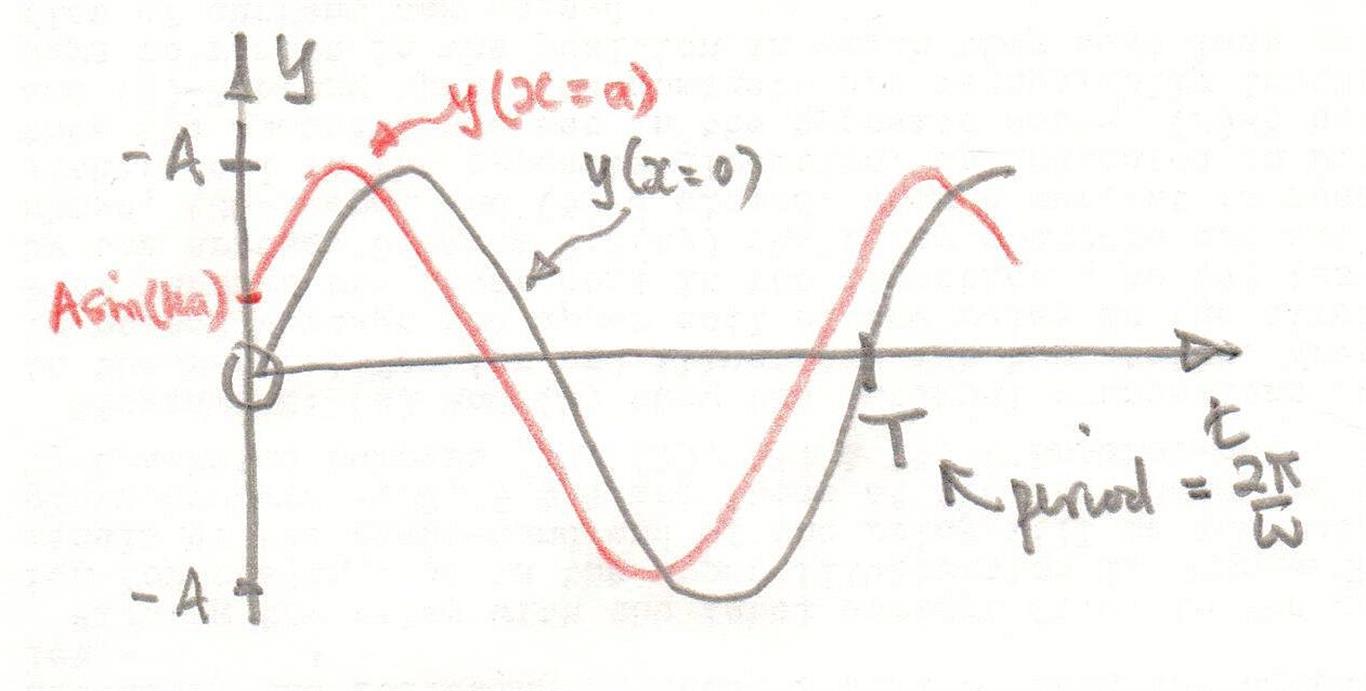 Now what do these graphs tell you about the motions of the particles at $x=0$ and $x=a$?

Suppose that now you look at the motion of the particles further away from the particle at $x=0$.

The separation in time of the two graphs will increase and increase until a position is reached where a particle at $x=b$ has a motion exactly the same as the one at x=0. 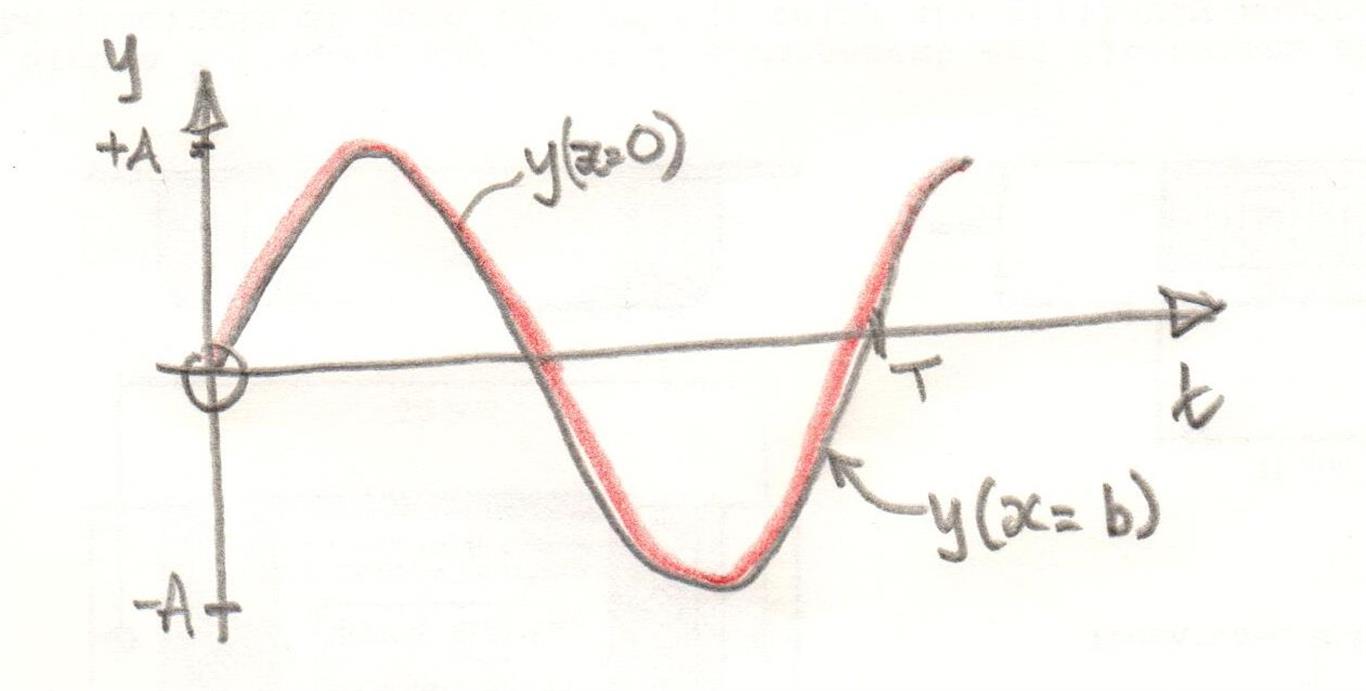 So now we have that

So the parameter $k$ is related to the wavelength of a wave and is used to compare the phases of particles' displacements in the medium at various positions.

A similar analysis can be done by drawing graphs of $y$ against $x$ to show that $\omega = 2 \pi f= \dfrac {2 \pi}{T}$ where $f$ is the frequency of the wave and $T$ its period.
The parameter $\omega$ is used to compare the phases of particles' displacements in the medium at various times.

Below I have drawn two graphs which are often reproduced in connection with waves and the wave equation.
I have done that to show that they look very similar and yet are totally different. 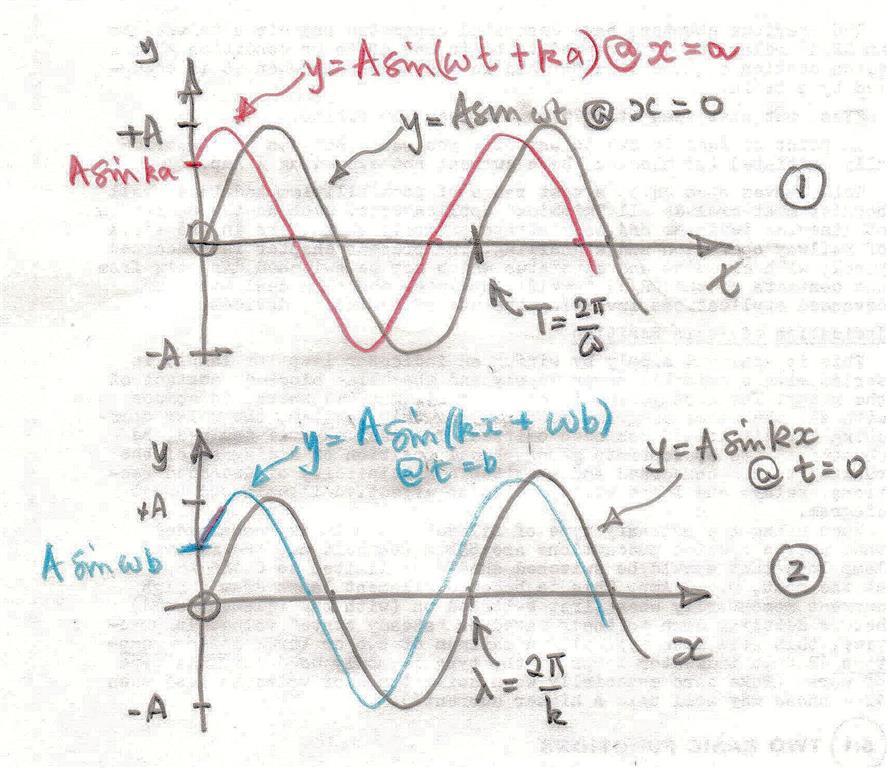 Graph 1 is a graph of the displacement of a particle $y$ against time $t$ for two particles one at $x=0$ and the other at $x=a$.

Graph 2 is a graph of the displacement of the particle $y$ at a position $x$ from the origin at time $t = 0$ and time $t = b$. This is sometimes called a wave profile and is that you would get if you took photographs of the wave at two different times.
It should be clear from this graph that the wave is still travelling to the left as predicted above.

The graphs are presented this way because the displacement $y$ depends both on position from the origin $x$ and time $t$.

The $\omega t$ term encodes the time-dependence of the wave form while $kx$ expresses its spatial dependence. Think of a wave form frozen in time, i.e. $y(t=t_0, x)=A\sin(kx+\omega t_0+\phi)$. The $\omega t_0$ is just an additional constant phase and can be absorbed into $\phi$. The result is an oscillation in space with a wave length (distance between adjacent valleys) of $\lambda=2\pi/k$. Now, reintroducing the time-dependence, this additional phase grows, making the wave oscillate in time at each fixed point with an angular frequency (not velocity) of $\omega$.

Another way to see this is by rewriting:

where $v=\omega/k$ is actually the (phase) velocity of the wave. You can see that the frequency-term amounts to a time-dependent translation, meaning that the wave form will move in the negative $x$-direction (for positive $k$).

Because of that it is conventional to actually parameterize plain waves rather by $y(t,x)=A\sin(kx-\omega t+\phi)$. This way the wave will travel in the direction of $k$. This is even more intuitive in more than one dimension where the wave number $k$ becomes a wave vector $\vec k$ and one writes $$y(t,\vec x) = A\sin(\vec k\cdot\vec x-\omega t+\phi)$$ with the dot product between $\vec x$ and $\vec k$. Then, $\vec k$ can be interpreted as the direction of propagation the wave is moving in, with the planes of constant value perpendicular to it.

-1
What will be the equation of a wave on a string?
4
What is the graphical representation of a wave plane of the form $e^{i(\vec{k}.\vec{r}-\omega t)}$ or $e^{i(k.x-\omega t)}$?
2
What is meant by phase, phase difference, in (and out of) phase in wave terminology?
2
Please help me with this doubt from waves
0
What is the theoretical/intutive meaning of $x(t) = x_0 \cos ( \omega t + f )$?
-1
How to understand motion of waves through functions of two variables - time and distance?