Do all equillibrium points of a discrete mapping show up on the bifurcation diagram?

The question in the title is perhaps vaguely posed, so I'll include the concrete example which is bugging me. 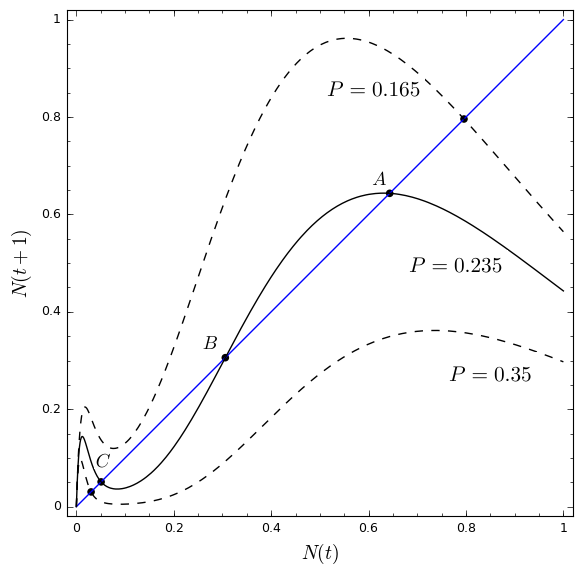 From here it can be seen that there are 3 regimes the system can be in, depending on the value of the parameter $P$:

I took the liberty of drawing cobweb diagrams for them all (except $N=0$, which seems to be an unstable fixed point for the given values), but I'll show just the ones important for my question: 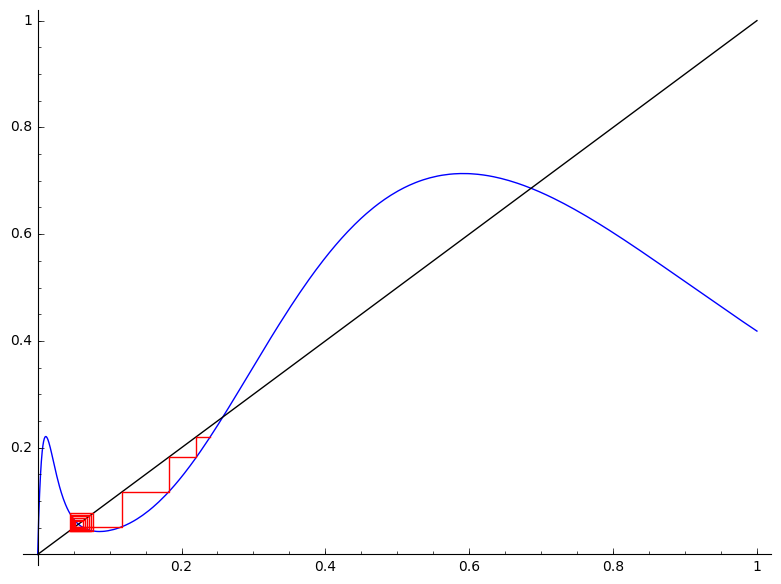 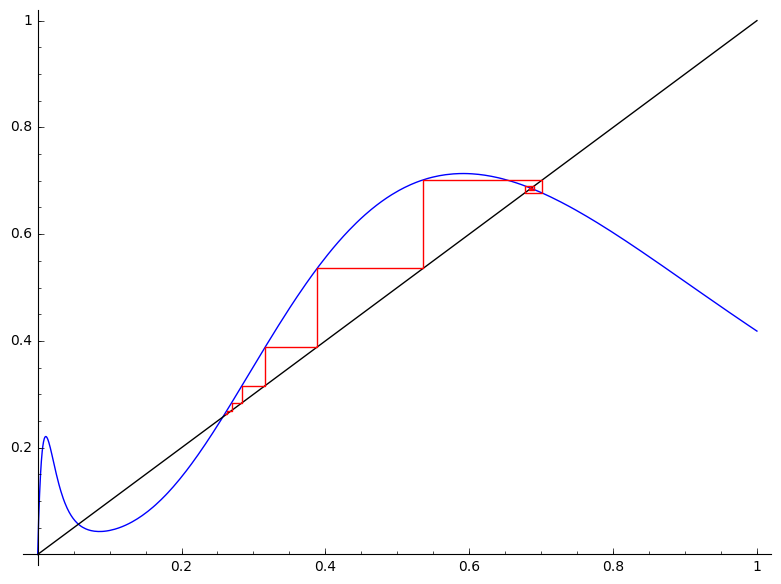 This seemed odd at first so I decided to plot the bifurcation diagram and the Lyapunov exponent of values of $P$:

Bifurcation diagram (dots are pretty dense after $P=0.4$, so it's not as reliable for comparison with the Lyapunov exponent after that point): 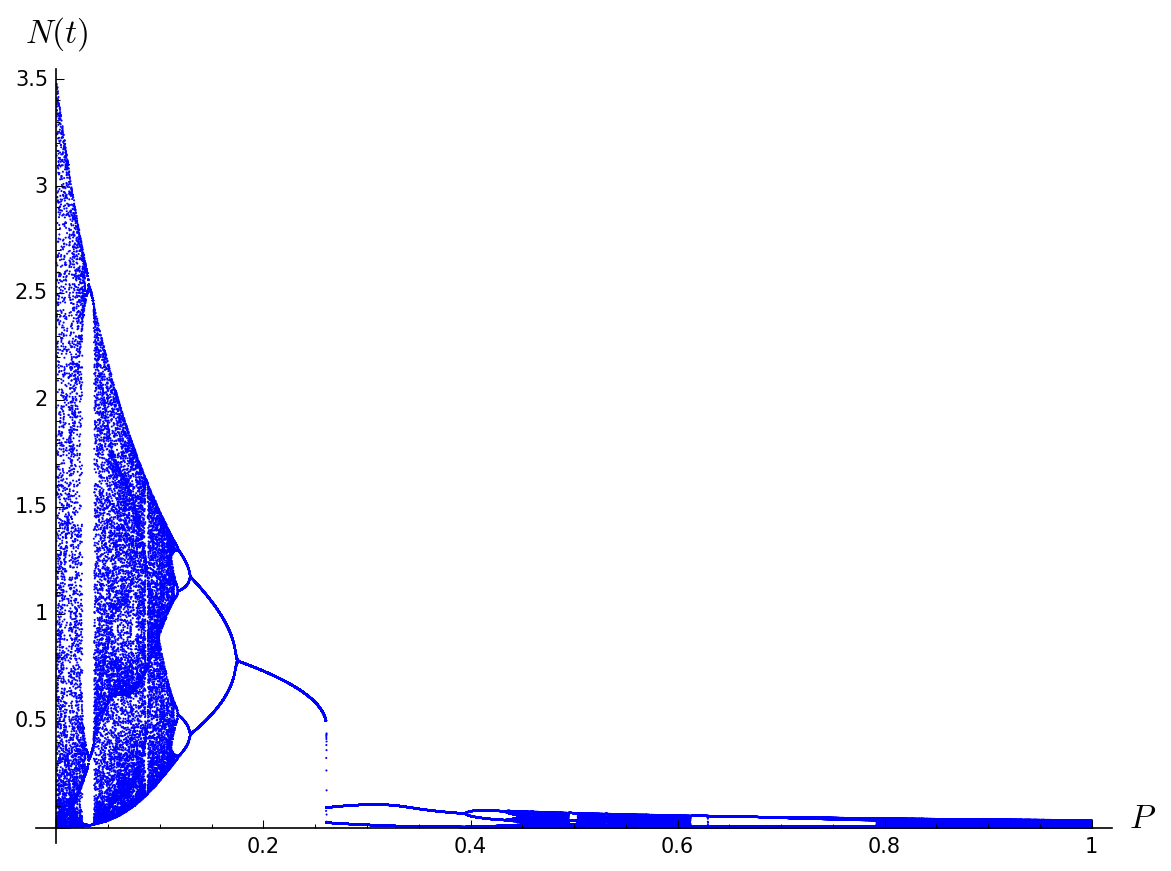 Most of the conclusions I made before drawing those last 2 diagrams got confirmed, but one issue stands: in the medium $P$ regime ($P=0.235$), the bifurcation diagram shows that the system has only one stable state (the higher one, point $A$), but refuses to acknowledge the other ($C$), despite the cobweb diagram showing that it's probably stable. Not only that, the Lyapunov exponent is around -2 for that point, and I'm pretty sure that the graph is accurate (it's plotted for the first 1000 terms in the Lyapunov sum, with a discrete step of 1/10000).

So, my main issue is: Does the bifurcation diagram show all equillibrium points that are accessible from a multitude of starting points for a given value of the bifurcation parameter? In this case, wheather the system landed in $A$ or $C$ depended only on the initial condition, namely $N_0<N_B$ or $N_0>N_B$.

For the doubled-period and chaotic regimes I got the correct cobweb diagrams (the system jumping between 2 distinct points and not settling in any point, respectively), among other correct predictions, so I'm convinced the error is not in my coding. Any insight in this matter would be greately appreciated.

EDIT: feel free to migrate this to math.se if you don't find this appropriate. The question arises from a physics problem, but I understand if it's considered off-topic

EDIT#2: As suggested, here is the enlarged version of the bifurcation diagram in the interval from $P=0.11$ to $P=0.5$ 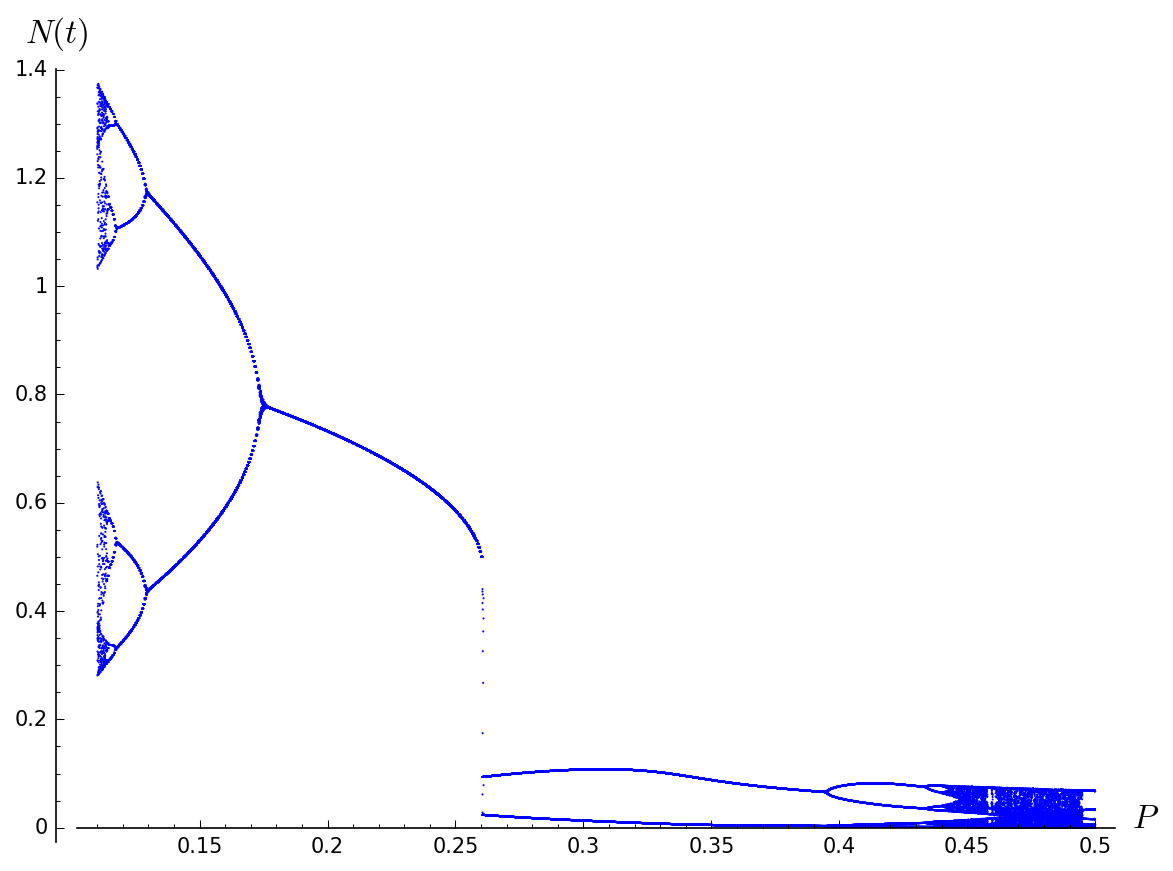 Ok, I do not know the Sage algorithm but I am going to offer a conjecture of what is happening. You have to verify the conjecture by further numerical investigations. I assume that the Sage algorithm works optimally for bifurcations of a single equilibrium and can run into problems such as we see here when dealing with equilibria (AKA fixed points) associated with more than one point.

What you see on your bifurcation diagram for $P > 0.26$ is actually a 2-point oscillation around the unstable equilibrium in $C$ (a basic bifurcation algorithm will not show unstable fixed points). The reason why this oscillation seems to converge on $C$ is probably because the oscillation is always very close to $C$.

At $P \approx 0.26$ the map-curve $N_{t+1}(N_t)$ touches the $N_{t+1}=N_t$ line, the equilibria $A$ and $B$ emerge as a "tangent bifurcation" for $P<0.26$ and this confuses the Sage algorithm to shift from the oscillation around $C$ to $A$. This confusion shows as the vertical line at $P \approx 0.26$ on your diagram. (Alternatively, there might be a short window of chaos.) Once again, the bifurcation diagram cannot show the unstable equilibrium $B$ which would show as a "lower branch" on the tangent bifurcation as seen for $P<0.26$. To verify this conjecture, you can check that at $P\approx 0.26$ both A and B emerge.

So the problem is probably that the Sage algorithm is trying to save computation time by only searching in the vicinity of the previous points on the bifurcation diagram but in so doing might omit parts of the diagram which are entirely due to a different equilibrium. To fix this problem you must simply set up Sage in a different way or use different software. (It is not difficult to write an inefficient but almost fail-safe program which draws the diagram just by shooting a bunch of densely placed random initial conditions and simply showing where they settle after a large number of iterations for every $P$.)

Not the answer you're looking for? Browse other questions tagged homework-and-exercises mathematical-physics equilibrium chaos-theory non-linear-systems or ask your own question.

1
How do I properly use Newton's Third Law and Free Body Diagrams?
3
Classify equilibrium points and find bifurcation points of a non-linear dynamic system
1
When is the phase space diagram an ellipse?
0
Difference between unstable fixed point and chaotic point
0
Defining a 'small disturbance which dampens in time' while identifying stable points in a nonlinear system
1
Do meaningful bifurcation diagrams exist for systems described by vector fields on circles?
2
Arnold's Mathematical Methods of Classical Mechanics and Lyapunov stability
2
What type of bifurcation is this?
2
Phase space portrait for dynamical system with Bifurcations