Do wormholes only allow FTL travel in “folded” spacetime?

Faster than light wormhole travel depicted in science fiction and in popular science articles seems to assume that rather than being flat (with dimples centered around large masses), spacetime is fairly lumpy in order to facilitate wormhole shortcuts.

Is there a plausible reason why spacetime would be conveniently "folded back on itself" as illustrated below? 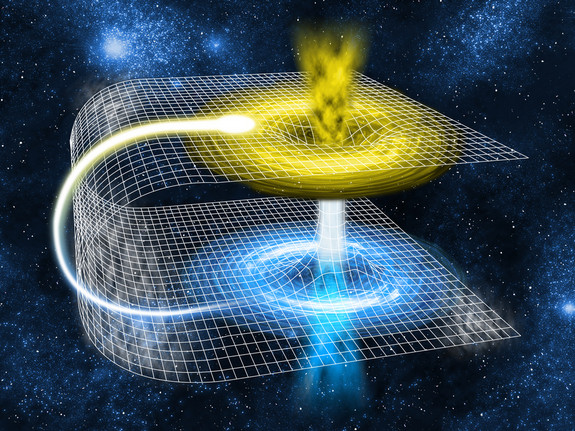 There is nothing in physics that describes the sort of folding shown in your picture. I'm afraid it is an invention of the Science-Fiction community.

The best tool we currently have for describing spacetime is general relativity, but GR does not and cannot tell us anything about the global topological properties of spacetime. The sort of wormhole you show is described by the Morris-Thorne metric. Leaving aside the inconvenient detail that the Morris-Thorne wormhole requires exotic matter, which (probably) doesn't exist, all GR tells us is that the wormhole links two flat regions of spacetime. So it looks like:

where $A$ and $B$ are two regions of flat spacetime. However the two regions $A$ and $B$ would (in this 2D representation) remain as two flat parallel sheets everywhere with no other joins between them. In effect they would be two different universes joined by the wormhole not different regions of our universe.

Not the answer you're looking for? Browse other questions tagged spacetime faster-than-light wormholes or ask your own question.

24
Building a wormhole
1
How would you connect a destination to a wormhole from your starting point to travel through it?
-1
Using wormholes to see out of the visible universe