Does unpolarized light means that photon is in superposition state?

I read that a polaroid filter is made of many long chain of molecules aligned in one direction and will only allow the vibration of light with the same alignment as the filter to be absorbed.

I always thought only certain frequency of light can be absorbed by the electrons but in this case it is the spin states that affect whether it is absorbed or not.

So the photon emitted from a light source is in superposition until the filter interact with it and cause it's wave function to collapse into only one spin state. (my own interpretation, which is wrong)

Q1: How does photon(superposition) knows whether it should be absorbed by the polaroid filter or not? either filter don't work with unpolarized light(obviously incorrect) or there's intrinsic value(also incorrect).

Q2: How does a polarized photon knows the polaroid filter's orientation?

Note: I'm now treating photon as a quantum particle instead of wave.

It all depends on definitions used of course, but overwhelmingly I have found that when people talk about "unpolarized" or "depolarized" they mean a classical mixture of pure quantum states. So they definitely do not mean a superposition state.

Another way to understand that a superposition is not "unpolarized", or at least that this is not a good definition, is as follows. Suppose you begin with linear polarized states in two orthogonal directions as your basis states, say $|x\rangle$ and $|y\rangle$. Now think of any superposition: it is a complex co-efficient superposition of $|x\rangle$ and $|y\rangle$. Then one can always make an orthonormal co-ordinate transformation to make the arbitrary superposition one of the new basis states. So this definition of "unpolarized" would be basis/ co-ordinate dependent!

A phenomenological description of the difference is as follows. Imagine a piece of experimental kit that can make any arbitrary unitary transformation on input light. Something like a Babinet-Soleil Compensator concatenated with a variable Faraday Rotator will do this for you. You connect its output to a linear polaroid. Now you input the light and make the following "differential diagnosis/categorization":

Let us try to clear up what light means and what a photon means.

Light is a solution of classical Maxwell's equations , an electromagnetic wave. As a wave it can have ploarizations that go through filters etc.

A photon is an elementary particle which has as energy h*nu, nu the frequency of an electromagnetic wave solution, and is described by a wave function that is the solution of the quantized Maxwell's equations. Classical electromagnetic waves emerge from a confluence of an extremely large number of photons.

I find the following image useful in talking of polarizations of photons which build up the classical electromagnetic wave: 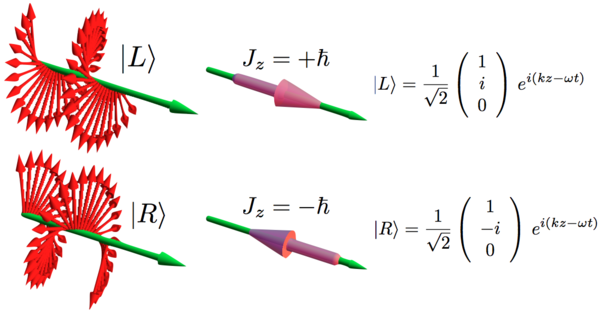 A photon has spin either + or - 1 against its direction of motion.

With the above framework

Q1: How does photon(superposition) knows whether it should be absorbed by the polaroid filter or not? either filter don't work with unpolarized light(obviously incorrect) or there's intrinsic value(also incorrect).

Each individual photon is an elementary particle and has a probability of interactions with the molecules in its path. That is how "it knows", by the probabilities. Now filter means that there exists transparency also, so some of the photons of the beam will be absorbed and some will scatter through, according to the quantum mechanical solutions of the boundary condition "photon + filter"

Q2: How does a polarized photon knows the polaroid filter's orientation?

The filter obviously has space orientation of the molecules it is composed of. These are part of the boundary conditions for the problem " photon+filter" and the appropriate probabilities predict the average paths of the photons.

Photons are always elementary particles. Their wave property is connected with the probability distributions for interaction.

The classical EM wave which is built up by zillions of photons can be interpreted classically and simply by considering the polarization of the EM wave and the classical scattering of waves through polarized molecules.

First, you are right about the unpolarized light. Second, whether a photon will be absorbed or not is according to the so-called selection rule which is determined by the conservation law (In this case it is the conservation of angular momentum). Thus you may think that the polaroid is "trying to" absorb each photon. However, the possibility for the absorption of a photon which break the selection rule is exactly zero.

Not the answer you're looking for? Browse other questions tagged photons quantum-spin polarization or ask your own question.

1
photon polarization, uncertainty in Energy
5
Is my simulation result for unpolarized light correct?
6
light linear polarization and photon spin
0
In a Stern-Gerlach measurement, does passing particles through the B field influence their spin state?
1
Explanation of the linear polarization from the photon spin
0
Unpolarized light, spherical wavelets and Photons
0
What happens to light that doesn't pass through polaroid film?
2
Is “non-polarized” light made up of equal amounts of circularly polarized clockwise and counter-clockwise light?
2
Connection between spin angular momentum of a photon and circular polarization of light
3
Does the Stern-Gerlach experiment really suggest superposition?