Why do the masses in an Atwood's machine move? 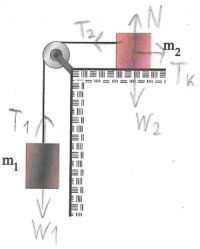 What i'm concerned with is that although $m_2 >m_1$ the system will move. $m_1$ will move downwards and $m_2$ to the left. Why do they move? Also, should the tension of the string $T_1$ and $T_2$ be the same (because we have only one string)? And finally when the bodies will move should their accelerations be the same, or not? Thanks a lot in advance.

So first, yes the tensions at $T_1$ and $T_2$ are equal. Knowing this, you can now set up two force equations. One for the $m_1$ block and one for the $m_2$ block. What you will find is that you will be able to related the force of gravity applied on $m_1$ to the frictional force on $m_2$. Now, if the force of gravity on $m_2$ is greater than the frictional force, your system will accelerate and the two masses will accelerate at the same rate, though in different directions.

The main note is to think of the forces, not the mass. For example, if your frictional force was 0, then your system would always accelerate regardless of the mass of $m_2$.

$\mu$ is coefficient of friction

The tension is the same in the string since its only one string connected to both masses. however to calculate this tension we break Tension into $T_1$ and $T_2$ as in the diagram for calculation but $T_1 = T_2$

this will help you in calculation

now as both bodies are connected they move at same acceleration and velocity with the net resultant force calculated above but remember now with net resultant force you have to use net mass too since both objects are associated with motion. $a=F_\mathrm{net}/(m_1+m_2) = 49.05/20 = 2.45$ m/s${}^2$

9
Why does the tension on the pulley in an Atwood machine not equal $(m_1 + m_2)g$?
1
Acceleration of masses hanging from a system of two pulleys
0
Can two bodies move with equal acceleration if forces acting on both are unequal?
0
Atwood Machine - with pulley attached to one mass. What's the constraint?
0
Tension in the same string between different masses
3
How can a massless string move if the net force on it is always zero?
0
Why is the tension on both sides of an Atwood machine identical?