This is a picture of 2 galaxies taken from The Hubble. The arrow shows a smaller galaxy's black hole starving of the usual stars because of the binary rotation about the bigger galaxy that is pulling stars away from it. Notice the ball of light are around the smaller one. Is the release of photons happening before the photon sphere? Are photons absorbed by atoms compressed out by gravity before the electrons are lost from the atom? 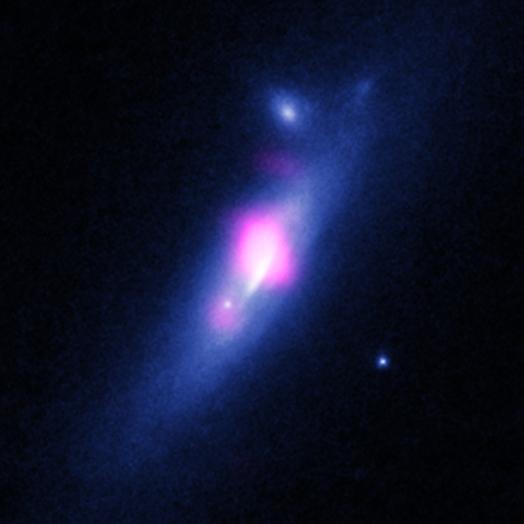 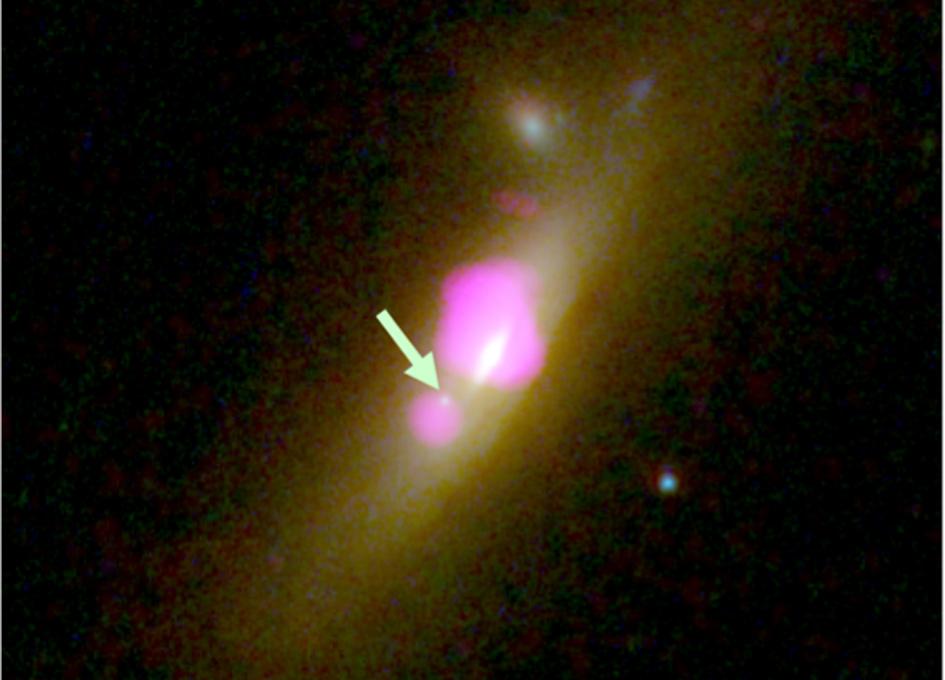 Notice the photons are reduced around the smaller one. Is that happening before the photon sphere?

The photon sphere by definition does not send any photons in our direction, as it is

a spherical region of space where gravity is strong enough that photons are forced to travel in orbits.

So the photons seen come from the region before, considering the dimensions of the system, light years before.

Are photons absorbed by atoms compressed out by gravity before the electrons are lost from the atom?

Gravitational and frictional forces compress and raise the temperature of the material causing the emission of electromagnetic radiation.

As the two black holes have to share the mass between them, (the larger one getting more), there are less in-falling charged particles to generate photons in the region between the two holes.

In a comment you say (I fixed a few words in this quote) "If it was a neutron star an atom would lose its electrons and protons before becoming a part of that star"... And in the question you say, "Are photons absorbed by atoms compressed out by gravity".

This reminds me of Feynman's father. If you Google "feynman father photon", you should find the story of how Feynman's father thought that the photon that an atom emits, was already in the atom before it was emitted. According to the story, Feynman said no, it's not, but then he couldn't explain the way it actually works.

Also, a neutron star isn't created by the atoms of the collapsing star losing their protons and electrons. The protons actually turn into neutrons too (this involves the quarks) and the electrons turn into neutrinos and escape into space:

What happens to Protons and Electrons when a Neutron star forms?

Not the answer you're looking for? Browse other questions tagged visible-light black-holes magnetic-fields field-theory photoelectric-effect or ask your own question.

16
What happens to Protons and Electrons when a Neutron star forms?