How does Newton's 3rd Law work in this scenario? Why is my reasoning wrong?

I came across this example question in my mechanics book: 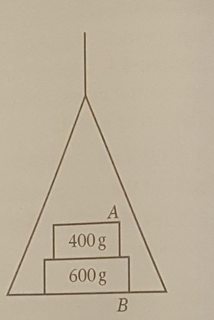 It's a light scale pan with negligible mass, with two blocks A and B, with masses 0.4kg and 0.6kg respectively. The pan is attached to a string. 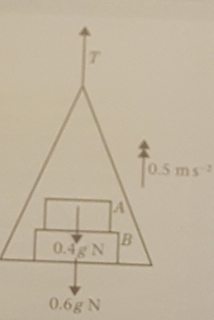 The book explains that the best way to go about this is to work out the force exerted on A by B, and then use Newton's 3rd Law to then say that A will exert an equal and opposite force on B. 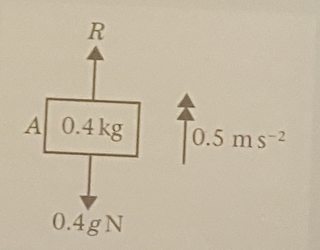 So it's just a simple matter of working out R, giving 4.12N, meaning 4.12N is exerted on A by B, thus meaning A exerts the same force on B.

If the masses were not accelerating, it would be the case that B exerts an upward force on A equal to

in order to cancel the downward force of gravity.

Since A is accelerating upward, it must be that B exerts a greater force equal to

So gravity isn't ignored; B must exert a force equal to the weight of A plus the force required to accelerate the mass of A upward.

2
Why is static friction omitted here? And comparison with this problem on Newton's second Law. Solutions are all provided
14
Why is a book on a table not an example of Newton's third law?
1
Accelerating an elevator
0
Newton's 3rd law applied to friction
0
Finding the tension in a pulley system
0
Why does this question give an answer of zero?