Why does black-body radiation work for *everything*?

Now I assume that doesn't apply to dark matter, and in general only to atoms as we are familiar with.

An atom by itself absorbs only specific frequencies, and this gives rise to spectral absorbsion lines.

Condensed matter in large collections of atoms will support phonons in the mass of electrons in the sample, and this fives rise to continuous spectra.

But what about clouds of neutral hydrogen? How can they give off black-body radiation at arbitrary temperature? Is the common teaching wrong, or are there other mechanisms (in which case the next-level teaching is wrong or incomplete)?

Edit: this question is probably covering it. The suggested dup does not.

Interesting that the comments and answers so far don't agree with each other or other posts, so I still wonder as to the authority of the answer. I'll summarize within a day after reading carefully.

Black-body radiation only works for black bodies. If your object doesn't absorb well in some spectral region, Planck's formula alone will give wrong results for this object in that region.

What you actually want to apply to clouds of hydrogen and any other not-really-black body is Kirchhoff's law of thermal radiation. As written in the Wikipedia page linked above, this law states that

For a body of any arbitrary material emitting and absorbing thermal electromagnetic radiation at every wavelength in thermodynamic equilibrium, the ratio of its emissive power to its dimensionless coefficient of absorption is equal to a universal function only of radiative wavelength and temperature. That universal function describes the perfect black-body emissive power.

The universal function mentioned is the well-known Planck's distribution $B(\lambda,T)$. So, if your object of interest has coefficient of absorption $\alpha(\lambda)$ at wavelength $\lambda$, then the energy $I(\lambda,T)$ emitted by the object is given by

This means that indeed hydrogen clouds won't emit at arbitrary frequency. This is also the reason why diamond doesn't glow when hot.

If by "everything" you qualify with "composed of atoms and molecules" yes; not only infrared of course, but matter at some average temperature will be giving off electromagnetic radiation because of collisions in gases, and vibrational and rotational transitions in liquids and solids, and of course in plasmas.

But what about clouds of neutral hydrogen? How can they give off black-body radiation at arbitrary temperature?

If the gas is fairly dense, it will have an average kinetic energy for its molecules which in collisions, due to the spill over electric fields, will emit electromagnetic radiation, and depending on the temperature it will have mostly an infrared and lower frequency spectrum.

Whether the radiation from matter follows Planck's law or needs modifications due to the specific medium is a matter of the particular study.

Is the common teaching wrong, or are there other mechanisms (in which case the next-level teaching is wrong or incomplete)?

It is not wrong except that radiation is not only in the infrared. Look at the solar irradiance spectrum of the sun which is approximated fairly well with a black body formula. 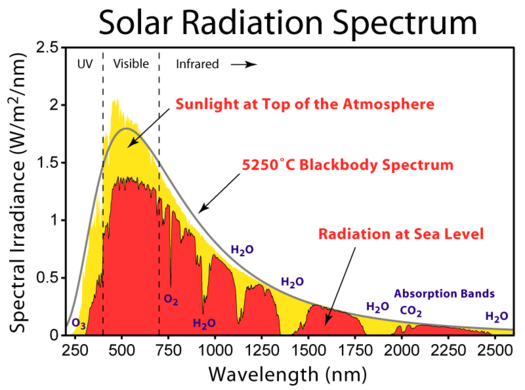 Your hydrogen cloud can be considered a very dilute gas when observed over long enough time and distance scales. In a gas, the collisions between atoms/molecules are the microscopic mechanism for thermal radiation.

Generally, all it takes for thermal radiation is charged particles and thermal motion.

55
What are the various physical mechanisms for energy transfer to the photon during blackbody emission?
20
What causes a black-body radiation curve to be continuous?
11
Why doesn't diamond glow when hot?
2
Blackbody or characteristic emission of radiation
1
Is this conceptualization of blackbody radiation logical/correct?
1
How does light appear from electricity?