How do the Planets and Sun get their initial spin?

To build on Martin Beckett's answer (especially because I am not sure how familiar you are with physics);

Currently we believe Stars form when objects known as Molecular Clouds (which are as one might guess, clouds of molecules in space, mostly comprised of hydrogen) collapse. It is important to note that these clouds are not 'static', they have some kind of motion, including some kind of 'average rotation', which is to say that overall the cloud is rotating (usually fairly slowly).

As was mentioned in Martin Beckett's answer, angular momentum is conserved; the typical example to give is to imagine a spinning figure skater, as she brings her arms in close to her body, she spins faster. If you don't believe this and have access to an office chair, it is easy to convince yourself (and possibly injure yourself too...). This holds true for the molecular cloud as well. As it collapses in on itself, it starts rotating faster and faster, forming a disc. The bulk of this coalesces into a big ball of hydrogen at the centre, which will eventually form a star. The matter in the disc slowly starts to clump together more and more to form the planets (it's a little more complicated than this, but if you're interested it's an easy topic to read up on). Similarly to how the overall cloud starts spinning faster and faster, the matter that forms these planets was spinning and maintains its spin as it clumps together into planets.

Anglular momentum is conserved, so any tiny initial rotation that a the original ball of gas had becomes faster as the gas collapses down into a star and disk of planets.

Venus probably received a hit from a some lump of rock / proto-planet some time early in it's life which changed it's rotation. A similar event split the moon off from Earth

How do the Planets and Sun get their initial rotation?

The Sun
Stars form from a gas cloud undergoing gravitational collapse. The cloud collapses into a protoplanetary disk as the protostar begins to grow. Conservation of angular momentum dictates that the protostar and disk maintain a constant angular momentum: The disk and star rotate about a common axis. This is what we see now in our solar system: A slowly rotating star whose rotation axis is more or less the same as the orbital axis of the planets' orbits.

The terrestrial planets
Terrestrial planets are assumed to form from a series of collisions, starting with little clumps of dust that eventually grow to be boulders, then to protoplanets, then to planetary embryos, and finally to planets. In those last few collisions amongst pairs of large planetary embryos, the angular momentum due to relative velocity of those last few binary collisions most likely overwhelms the angular momentum due to rotation. The initial rotation of the terrestrial planets is a result of the last big collision. The result is somewhat random.

Mercury
Mercury is a special case. It is essentially tidally locked to the Sun. (More precisely, it's in a 3:2 spin-orbit resonance.) The very strong gravity gradient torque exerted on Mercury by the Sun would have overwhelmed any reasonable initial rotation. Whatever initial rotational angular velocity Mercury had, it is long gone. There's no telling what Mercury's initial rotation rate or rotational axis were.

Venus
Venus is another special case. It rotates very slowly, and it's rotation is retrograde. Venus' rotation axis is nearly upside down (177° obliquity). For a long time, most solar scientists thought this was a consequence of the last big thing to hit Venus (see above). There are two problems with a giant collision to explain Venus' rotation. One is that a collision that makes Venus rotate almost exactly opposite it's orbital axis is rather unlikely. An even bigger problem is that Venus has a very thick atmosphere. A last big whack large enough to make Venus flip on its side most likely would have expelled Venus' atmosphere. A nice solution is that Venus' upside-down rotation is a natural consequence of Venus' very thick atmosphere. Per Alexandre Correia and Jacques Laskar, "The four final rotation states of Venus," Nature 411.6839 (2001): 767-770, Venus is close to being in one of (and one of the most likely) four possible final rotational states. No last big whack is needed to explain Venus' rotation. Whatever initial rotation it had, it is long gone.

If this hypothesis is correct, the Earth's would have rotated significantly faster than the current rotation rate of one rotation every 24 hours, instead rotating once every four to six hours. Our current rotation rate is a result of a gradual transfer of angular momentum from the Earth's rotation to the Moon's orbit. There are signs of this transfer in fossils and in rocks that show that the Earth did indeed rotate faster than it does now.

Mars
Mars is the terrestrial planet that is furthest from the Sun, it doesn't have a thick atmosphere, and it doesn't have a big moon. Mars appears to have been subject to some rather large late whacks, perhaps even an extremely big one that makes almost all of Mars' northern hemisphere a big impact crater. Perhaps Mars is the only terrestrial planet whose current rotation is close to its primordial rotation.

Mars however is rather close to Jupiter, and if the Grand Tack model is correct, it was even closer to Jupiter in the distant past. There is strong evidence that Mars' obliquity (axial tilt) has undergone chaotic variations in the past. Mars is yet another special case.

The giant planets
The giant planets are thought to have initially formed by a process similar to (but more rapid than) the way in which the terrestrial planets formed. That initial rocky/icy nucleus would have orbited the proto-Sun slightly faster than the gas and dust in the immediate vicinity. This enabled the proto giant planets to sweep up gas, ices, and dust from the protoplanetary disk. The density of the stuff that comprised the disk was anything but uniform, typically higher toward the protostar. The sweeping up of this non-uniform density would have imparted a torque on the protoplanet, overwhelming whatever random spin the nucleus had had. All four of the giant planets rotate rather quickly, and except for Uranus, they rotate more or less with the planet's orbit.

Saturn
Saturn is Jupiter's smaller sibling, a gas giant that rotates quite rapidly. Saturn's rapid rotation is consistent with the planetary formation model. It's obliquity of 26.73° is a bit tougher to explain. Perhaps there was some interaction with one of the other giant planets (e.g., see William Ward and Douglas Hamilton, "Tilting saturn. I. Analytic model," The Astronomical Journal 128.5 (2004): 2501), or perhaps with a since-expelled fifth giant planet.

Uranus
Uranus is the odd planet out amongst the giant planets. Uranus' large axial tilt is second only to that of Venus. There are a number of questions and answers about Uranus' axial tilt on this site and sister stackexchange sites. For example, see Why is Uranus's axis of rotation tilted? and What is the accepted theory as to why Uranus' axis is tilted so severely?. In addition to the collision models described in the answers to those questions, a collision-free model has been proposed; see Gwenaël Boué and Jacques Laskar, "A collisionless scenario for Uranus tilting," The Astrophysical Journal Letters 712.1 (2010): L44.

Neptune
Neptune is Uranus' sibling. Both are ice giants with very similar masses and rotation rates. Neptune doesn't have Uranus' odd axial tilt. It does however have an axial tilt that isn't completely consistent with the planetary formation model. One explanation is the same as that for Saturn; see above.

Q1 has been recently asked again (and quickly closed) and there's, I think, a simple and important illustration that also deserves to be added to this old question.

Consider the bulk of the proto-planet surrounded by more material, which is being attracted to it. Consider also that the material around this relatively small region in the accretion disk has approximately constant speed $v$: as the material converge to the local center of attraction, conservation of angular momentum 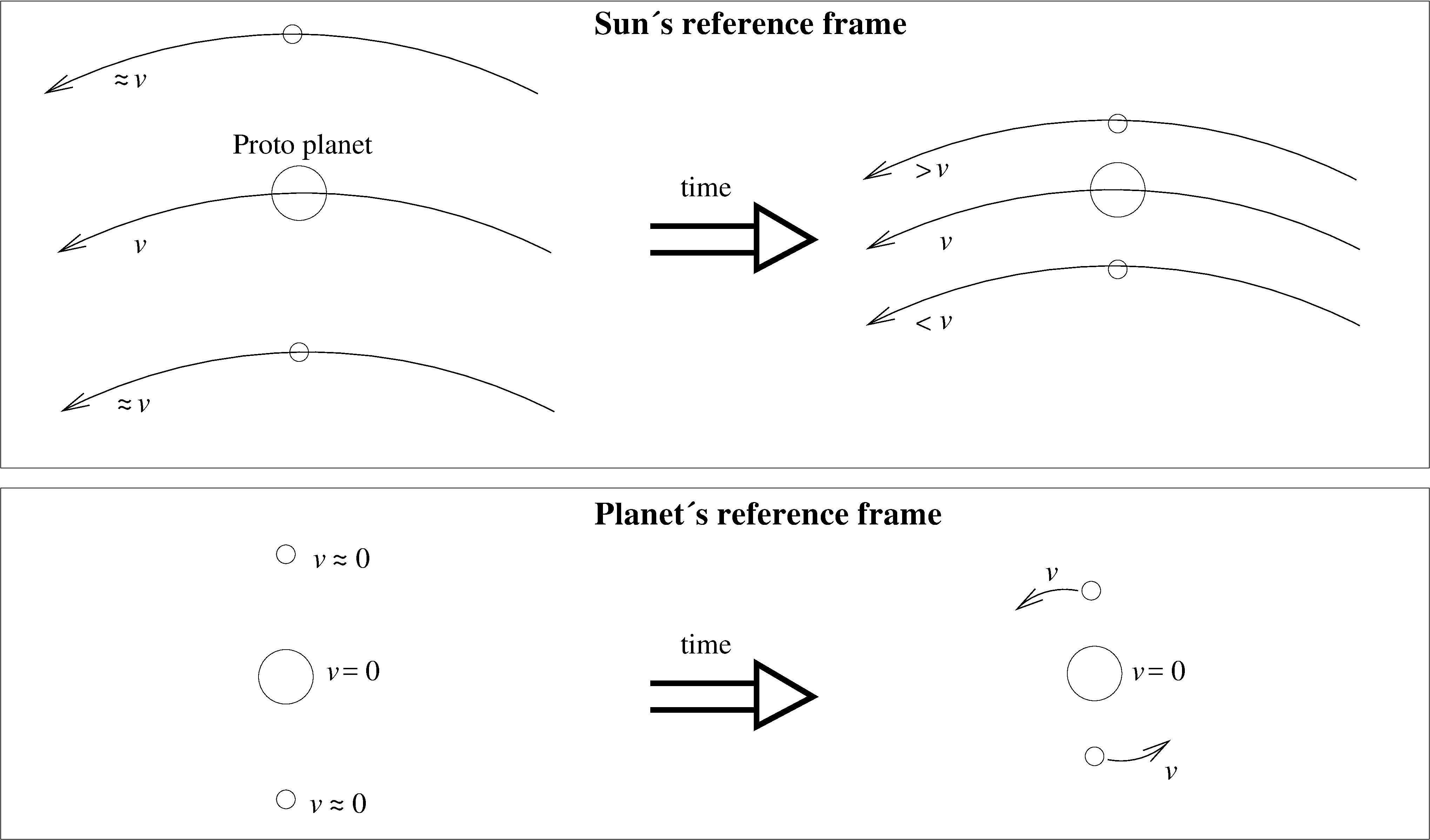 (I'm the author of this picture, but I'm pretty sure I didn't come up with its idea - I couldn't find it in a quick search, though, so if someone knows a reference that contains this explanation (or if it's wrong!), please, share in a comment.)

If we leave out Earth for a moment, it appears that rocky planets slow down linearly on their rotation periods - the closer they become to the Sun. Earth is an anomaly probably because of the Moon which has speeded up its rotation up considerably. According to my graph of this linear relationship between 'day' length and distance from the Sun, an Earth without the Moon would have days which are 1,960 hours long. So the Sun must have some influence on the rotation periods of each planet.

14
Earth rotation: What provides the energy?
2
Where does the angular momentum of the solar system come from?
2
How did planets start to spin and do all of them spin in same direction?
2
Why are the planets rotating on their own axis?
0
Rotation of planets
-1
How does orbiting work exactly?
1
What's responsible for the earth to rotate and for the objects on it to rotate with it?
64
Why does everything spin?
57
Why the galaxies form 2D planes (or spiral-like) instead of 3D balls (or spherical-like)?
15
Why is Uranus's axis of rotation tilted?
See more linked questions

9
What planets are visible to the naked eye from Mars?
8
How does the atmospheric UVB attenuation of terrestrial planets compare?
1
Could this planetary superalignment happen?
0
Can the Earth be seen to transit the sun from the outer planets?
4
Relation between average density of planets and their distance from the sun
5
Why are large planets away from the Sun and smaller planets near the Sun?
0
Why do the sun and planets differ in their chemical elements composition?
0
Winds on gas giant planets: Would they increase if closer to their star?