Large scale structure of the universe

I have read of two seemingly straightforward explanations that give reasons for the inhomogeneity of the large-scale structure of the universe (i.e. why stars / galaxies formed where they did)

One is tiny temperature fluctuations, and the other is the dark matter web.

While I understand that the latter is more theoretical than the former, are they competing theories, or would they somehow relate / affect each other?

The main point to grasp is that the tiny inhomogeneities seen in the CMB are too small (by a factor of 100) to grow into the structures we see today without something like "cold dark matter".

The CMB was formed at the epoch when normal (baryonic) matter and the radiation filling the universe decoupled. Only at this point was normal matter free to start clumping together via gravity. The idea is that this process is accelerated by dark, non-baryonic matter. This "decoupled" from normal (baryonic) matter at a much earlier stage than radiation decoupled from baryonic matter, allowing gravity to do its thing earlier. Upon decoupling from radiation, baryonic (normal) matter was able to form structure much more rapidly than it would have done otherwise, by falling into pre-existing gravitational potential wells set up by the dark matter. The dark matter acts as a framework upon which the visible universe is constructed.

In the included sketch I show that, in an infinite universe, an over-dense region by no means will clump matter.
The LSS - Large Scale Structure of the Universe is dominated by Voids and the galaxies are concentrated in the intersections of the voids.
In the sketch I show that a void is originated by a under-dense region on collision-less matter implied by the low density and temperature of the universe.
I can post the equations and better drawings but I hope that the simpler the better.
This answer is not in the books and if you find it in error please explain. 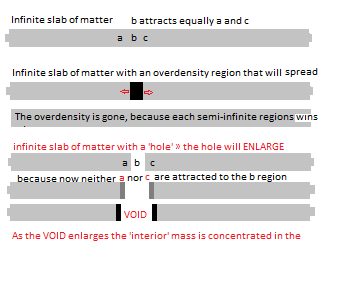 Not the answer you're looking for? Browse other questions tagged cosmology temperature dark-matter structure-formation or ask your own question.

1
Could black holes interact with dark matter at distances far greater than matter?
2
Hawking in A Brief History of Time: No beginning or end of the Universe
5
Does Dark Matter Exert The Same Gravitational Force As Ordinary Matter?
1
Entropy and large-scale structure of the universe