Do we know why there is a speed limit in our universe?

This question is about why we have a universal speed limit (the speed of light in vacuum). Is there a more fundamental law that tells us why this is?

I'm not asking why the speed limit is equal to $c$ and not something else, but why there is a limit at all.

EDIT: Answers like "if it was not.." and answers explaining the consequences of having or not having a speed limit are not--in my opinion-- giving an answer to whether there is a more fundamental way to derive it from a law to explain this limit.

Light travels fastest in the universe because of its speed but also because of its path. Pierre de Fermat maintained that "light travels between two points along the path of shortest time". This can be called the Principle of Least Time. Then there is the Principle of Least Action. Quoting Pierre Louis Maupertuis "nature is thrifty in all its actions". Can you think of an example in nature where resources/energy are wasted? I would cautiously suggest that nature has no need for any movement faster than light and therefore has not provided it.

The speed of light applies to more than just light, nothing can propagate faster, including forces that act on matter. There's a non-traditional answer for why, though. The speed of light is a maximum speed because we are all traveling in a wave carrying medium, spacetime. Light, as a wave in the medium, travels at a constant speed in it; and like everything else in smooth travel in a "fluid", we move slower than a wave traveling in the fluid of space time, as observed with objects in water or air or waves in solids. (Solids are a special case, since only waves travel through them.)

The analogy hints that there may not be an absolute speed limit, but everything we have observed travels through the "fluid" of spacetime and can't be used to accelerate past the speed of light, so we're stuck. There are classically two cases for Acceleration.

1) The thing that's accelerating has mass:

We have observed that the mass, as observed by an external observer, varies as a ratio of $$\frac{1}{\sqrt{ 1 - v^2 / c^2}}$$ So, our observation says that mass goes to infinity as v approaches c, but we don't know "why," exactly, but, it acts like increasing resistance to travel through a "medium" or diminishing returns trying to add momentum to the traveling object. As a function of the energy required increase velocity goes, your yield in velocity increase gets less and less because the resistance to movement, "mass," gets larger and larger and eventually, because of "mass," energy (which is waves or matter on the same medium as the object we're accelerating, so it must travel slower than the speed of light) eventually gets so ineffective as to not really cause an effect for any known source of energy.

2) The thing that's accelerating has no mass:

The only thing we know of currently that has no mass, but is measurable in some way is a wave/particle thingie, and it can't accelerate, it just travels through the fluid of spacetime. Gravity, EM like light, fundamental forces all propagate as a wave on a media. And again, that media is "Spacetime" but we don't know what it's made of. Other waves travel through matter, and there's a wave speed that's measurable in all of them. BUT, it is travel in matter, within spacetime.

3) The third case of accelerating matter past the speed of light is interesting speculation, but ultimately futile, since is not possible according to known physics as there's no way to add more momentum after you get to the speed of light. If someone were to add a force that pushed on something other than "space..." there's a thought experiment for faster than wave travel in the medium of spacetime.

If you look at faster than wake travel in other medium, you can see it's possible, but things change. For a while, we thought that we couldn't travel faster than sound, but because there's no acceleration limit, something special happens at the boundary, a plane can exceed it and it causes a conical shock wave behind it. A boat can travel faster than the waves in the water, and again, a breaking wave, a "shock wave" appears on the surface behind the boat. What it would mean to accelerate to travel faster than the waves traveling on space time? We don't think it can be done, but it seems like we sort of know how it might look from slower speed FTW relativistic travel. There is a name for the shock wave created when matter travels faster than the local speed of light (a fission reactor is the usual example), called Cherenkov radiation, which tracks with normal faster than wave travel in a fluid. (We see visible light, a pretty shade of blue.) For travel in normal fluids, traveling faster than a wave causes a new wake regime. With the speed of light, the speed of a wave in spacetime, could it be the same? Maybe, if there were some other force, some other way to add momentum to the system. Something traveling faster than c would potentially form a shock wave and maybe deform spacetime in a new way. There are hints that spacetime acts like a fluid compressible by mass; If you excluded gravity as a force that could act on light directly, light curving around a large enough mass looks like what happens when the speed of an object changes in the direction perpendicular from its travel, which we call refraction. It's probably a mistaken comparision, though, since there's no evidence that light CAN speed up; otherwise the event horizon around a black hole would not swallow light. But there are people looking at density of space So, there is research around the edges, but breaking that limit of c Not so likely, but interesting to consider.

I disagree on the point that there is a universal speed limit in our universe, unless of course you define the word "speed" in a very unintuitive way.

I claim that dividing proper length of the distance traveled in the observer frame by proper time in the object frame $\left(= \gamma \cdot v\right)$ is closer to our intuitive understanding of speed than the variable $v$ (which is defined with respect to the unintuitive definition of time in special relativity). This quantity isn't limited by $c$.

Equivalently, one can take the magnitude of the vector consisting only of the spatial components of the four-velocity. Again, this isn't equal to $v$ and can be bigger than $c$. 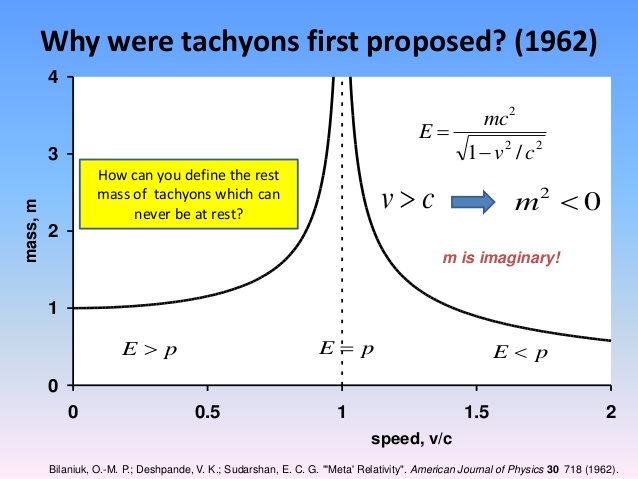 But such faster than light speeds has strange time properties, particles travels so fast that they constantly jump back in time, and will always come from the future and go to the past. Seen from our reality this might looked upon as particles constantly traveling wormholes to the past, and we have never observed such particles, and it might not even be possible to observe such particles.

Richard Feynman and Wheeler had a strange hypothesis, what if light is emitted by an advanced photon which traveled back in time, and emits the light. We might argue that this is not breaking causality as for this particle linear time goes the other way. This answer by Terry Bollinger explains this hypothesis beautifully: Can a photon get emitted without a receiver?

Inspired by Feynman I wonder if there is a relation here, if a tachyon with close to infinite speed and close to zero energy is emitted, from our eye in the same moment as a light is received, could the tachyon travel back in time to the emitter and influence the quantum jump which emitted the light? The relation is then: Does infinite speed match the speed of light in reverse direction? Anyone know how to calculate this?

If there is such a relation, then we might wonder if infinite speed plays a part in setting the speed of light boundary.

25
Accelerating particles to speeds infinitesimally close to the speed of light?
114
If all motion is relative, how does light have a finite speed?
3
Why is there a universal speed limit?
9
Why should gluons move at a speed determined by $\mu_0$ and $\varepsilon_0$?
9
Why does speed of light have to be constant?