Since, a neutral metal ball have no potential of its own , it will have -ve potential due to external -ve charge. 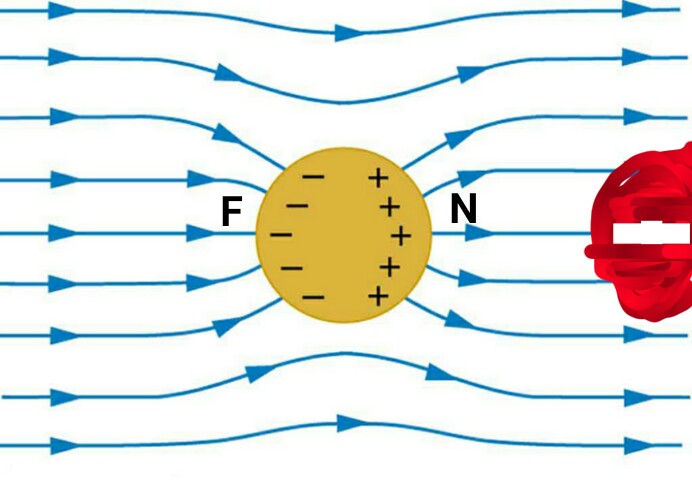 The positive charge induced on one side of sphere will cancel negative charge on other side. Configuration of charges is such that no charge is induced at centre of sphere.

Now potential at centre will only be due to outer negative charge and potential due to two sides of sphere cancel each other exactly.

where $r$ is distance from center of sphere w.r.t. RHS.

Edit : Another case: If inducing charge is not far.

Consider your -ve charge at distance of $r$ from centre of sphere of radius $R$.

Now, Potential at point near to sphere will be $\frac{-kq}{r-R}$

N has positive charge although -ve potential and F has -ve charge .

Now, potential at far side had become more -ve and at near side less -ve.

Note: there is no such charge q' in real, just let it.

Since net charge on sphere is 0. An equal $-q'$ charge at distance $R/r$ from F will also be formed which had induced -ve charge at F.

Now, due to PD electrons in sphere move,so that, potential at $F$ and $N$ are same.

Not the answer you're looking for? Browse other questions tagged electrostatics electricity potential-energy superconductivity voltage or ask your own question.

1
Charging by induction (and grounding)?
0
Doesn't charging by induction violate Law of Conservation of Energy
15
Why the electric potential of Earth is zero?
0
Charging a metallic sphere positive by induction
0
Grounding and equipotential lines
4
Charging sphere with induction
1
Does grounding set the potential on a surface of a sphere to $~0~$ or the potential due to the charges of the sphere to $~0~$?
0
Voltage between parallel capacitor plates
0
Does a positive charge flow from conductor to earth when it is earthed?