Why is diamond transparent while graphite is not?

Diamond and graphite are both made of the same atom, carbon. Diamond has a tetrahedron structure while graphite has a flat hexagonal structure. Why is diamond transparent while graphite is not (at least not with more than a couple of layers)? 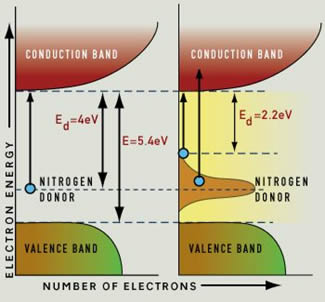 Normally, diamond is not a conductor: all the electrons live in the "valence band", and you need a photon with at least 5.4 eV of energy to push an electron into the conduction band. In the process, that photon would be absorbed. A photon with less energy cannot give its energy to an electron, because that electron "has nowhere to go". And since visible light has energies of between 1.65 and 3.1 eV, only UV photons have enough energy to be absorbed by pure diamond.

That same link also describes how impurities give rise to color in diamond: for example, nitrogen atoms produce an "intermediate" energy level, and this gives rise to more energetic electrons that could jump the gap to the conduction band and absorb light.

Diamonds are unstable compared to coal (or more exactly, graphite) so high temperature and pressure are required for diamonds to form from graphite. The reason that coal (graphite) is black and diamonds are clear has to do with how the carbon atoms are connected together in the two different forms of carbon. In diamond each carbon atom is bonded to its neighbors like the points of a pyramid. In graphite (coal) the atoms are connected to one another is flat planes. The flat planes can absorb light of all wavelengths (colors) while the pyramids found in diamonds cannot absorb any visible light and as a result are transparent. The reason for the difference is that the electrons in the large flat sheets of graphite can all "jiggle" at many frequencies, but the tightly bound and constrained electrons in diamond are not free to "jiggle" and thus cannot absorb light. Heat and pressure change coal into diamond, but it is the change in crystal structure that results in the color change. Graphite is composed of flat sheets of carbon similar to shale and basically keeps going in all direction until the end of the sheet. Diamond is a 7-carbon crystal, which is 3-dimentional and therefore gives the crystal light refracting properites. Color is a result of light absorbtion or light reflextion. Black means that all possible colors are being absorbed and white means that all colors are reflected. In the case of diamond, it is clear because light passes through it.

Not the answer you're looking for? Browse other questions tagged optics material-science electronic-band-theory optical-materials diamond or ask your own question.

1
Band gap in semiconductors
12
Why is crystalline graphite black yet shiny?
2
What determines if a photon is absorbed or not, i.e. if an object looks black or coloured?
2
Why aren't all insulators transparent, since they have a large band gap?
1
reconcile transparency with energy band in solids
0
Opaque and transparent objects

8
Transparency of materials
6
Graphene +1 extra carbon bond
16
Why does diamond have lower tensile strength than Iron?
3
Why is graphene robust, but graphite not?
1
Is possible to synthesize diamond at relatively lower pressures (6 to 7 GPa vs 12 GPa)?
4
Why does hot (molten) glass glow, while diamond does not?