Does the wavefront in the double slit experiment represent the electric field of the EM radiation / light?

The question "What is a wavefront?" get the answer "A wavefront is a contiguous region of constant phase". This seems to be right for water waves as well as for electromagnetic radiation. But what is oscillating in the EM radiation (to be or not to be in phase)? It has to be the electric field component (or the magnetic field component) of light. But I'm not sure, that this is what represents the wavefront. 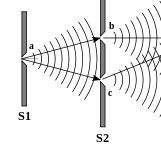 So I'm wondering, does the wavefront in the sketch about the double slit experiment represent the electric field (or if you want the magnetic field component) of the EM radiation / light?

But it didn't matter if we tracked the point where it is $+A$ or where it is $-A$ (how could one of those even be better than the other, it's just a choice of coordinate system to have a $+x$ or a $-x$). We could even track any other point. We can draw one picture and just note that points of constant phase are drawn in black.

It's like a contour plot for phase. At every point in space we have a phase and we draw lines every $2\pi$ units of phase. You could think of them as the peaks, or as the troughs, or as any other phase.

Following this point on one of the arcs we get the full cycle of interference including the extinction at some point.

This seems to happen without any consequences until the waves "hit" the screen?

The screen is a location where waves affect charges, so now something else can happen. The screen can (and does) react to the incoming wave.

Not the answer you're looking for? Browse other questions tagged electromagnetic-radiation double-slit-experiment diffraction or ask your own question.

0
What is a wavefront?
1
Are wave fronts in double-slit experiments moving forward?