Enormous masses of $X$- and $Y$-bosons in GUTs

I was reading an article on Wikipedia about the hypothetical particles called $X$ and $Y$ Bosons.

No, definitely their masses are far too small, if anything.

For comparison, if you are into kgs, I'd advocate using millionths of a gram, so μgs. So the minimal Grand Unification gauge bosons you are discussing are about 0.0018 μg, while the Planck mass is about 22 μg and a grain of sugar is about 625 μg.

They are too light, since they would mediate proton decay, so the lifetime of the proton would be about $10^{30}$ years, and the experimental null limits are, by now, $\tau > 10^{34}$yrs. Recall τ goes as the 4th power of their mass. If they were heavier, failure to observe proton decay would be plausible, but they cannot be; so other, more recondite theories are constantly being cooked up to supplant them.

The grand unification scale that specifies their mass is pegged by the renormalization group evolution of the gauge couplings of the gauge theories comprising the standard model. Plot the inverse couplings (strengths) of the gauge interactions, red for strong (color SU(3)), blue for weak isospin (SU(2)), and black for hypercharge U(1)) versus the logarithm of the energy, from the scale of the EW unification, say the mass of the Z : 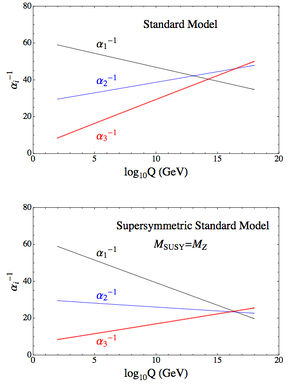 Very schematically, the strong coupling decreases with energy (asymptotic freedom, red) while the weak isospin (blue, non-Abelian) decreases but more slowly, and the hypercharge (black, Abelian) increases instead, like unvarnished QED. They cross around $10^{15}$GeV, sloppily for the SM, more elegantly for the SUSY SM, but no matter, one may sensibly presume unification of all three gauge groups. The scale that specifies the mass of the X and Y is thus four orders of magnitude away from the Planck scale characterizing gravity.

Not the answer you're looking for? Browse other questions tagged particle-physics bosons grand-unification or ask your own question.

1
What really is the future about the Standard Model
23
How come “smaller, weaker” particles are more massive (have higher energies)?
1
Is there experimental evidence supporting the equivalence principle between different particles?
33
Why do we need complex representations in Grand Unified Theories?
3
With the LHC about to restart as max energy, are there absolutely no hints or tantalizing signs of Supersymmetry in previous data?
1
Why is quark flavor just a SU(N) group?
0
Choosing $Z$ particles from a simulator results
0
Spin and force carrying bosons