Can virtual particles be thought of as off-shell Fourier components of a field?

I just found this blog post, which gives an interpretation of virtual particles I haven't seen before.

Consider a 1D system of springs and masses, where the springs are slightly nonlinear. A "real particle" is a regular $\cos(kx-\omega t)$ wavepacket moving through the line, where $\omega$ satisfies the dispersion relation $\omega = \omega(k)$. When two real particles collide, the region where they collide temporarily looks really weird, as they interact nonlinearly, pulling and pushing on each other.

Formally, we can write this weird region as the sum of a bunch of $\cos(kx-\omega t)$ waves, but there's no guarantee they'll have the right dispersion relation. Thus, each term in the resulting expansion is a off-shell "virtual particle". If you add up all the virtual particles, you get the actual intermediate field state, which is just a weird ripple in the field where the two particles are interacting.

As another example, consider the statement "a static EM field is made of virtual particles". Under this interpretation, what that really means is, "a static field (e.g. $1/r^2$) is not equal to $\cos(kx-\omega t)$, but may be expanded in terms of such sinusoids", which is much less mysterious sounding. In fact, this is exactly what we do when we consider scattering off a potential in normal QM, e.g. in the Born approximation.

The above gives some intuition for what a 'virtual particle' means in classical field theory. They are the Fourier components of the field with $(\omega, k)$ not satisfying the dispersion relation, and they are useful in classical perturbation theory. However, they are not propagating degrees of freedom, so they only appear during interactions.

The picture above is entirely classical. Does this picture generalize to quantum field theory, giving a physical intuition for virtual particles there?

I will use the expressions "virtual particles" and "internal lines in a Feynman diagram" interchangably in this answer.

That we expand the time evolution operator suggests another "intuition" however: Virtual particle represent (fictitious) intermediate states over which we must sum. The time evolution operator there essentially means that when we compute the n-point function in an interacting theory, we must not only compute the "naive" n-point function, but also that in the presence of 1, 2, 3, 4, (i.e. finitely many) interactions (the vertices). At weak coupling $\lambda$, each interaction term suppresses the contribution of the summand it appear in, meaning the diagrams with few vertices contribute the most.

Heuristically: If you compare this to usual time-dependent perturbation theory in ordinary quantum mechanics (semi-randomly picked reference from a Google search [pdf]), it should be familiar: Expand the time evolution operator into its Dyson series, insert identies $1 = \sum_m \lvert m \rangle\langle m \rvert$, compute up to desired/feasible order. If we interpret $V(\phi)$ as the vertices, then the internal lines correspond to the inserted identities, meaning you may view virtual particles simply as generic "intermediate states" over which we must sum. You may even draw the same types of diagrams to organize such perturbation series in general.

CuriousMind, and many others, define a "virtual particle" as "an internal line in a Feynman diagram." Prof Strassler is advocating for another definition*.

Suppose you have a propagator for some system, with a form like:

where $\omega$ is the frequency/energy, $k$ is the wavenumber/momentum, and $\Sigma$ is the (exact) self-energy. Strassler is suggesting that we define a "real particle" for this system as a configuration where $\omega=\epsilon(k)+\Sigma$, and a "virtual particle" as any pair of $(\omega,k)$ where this is not satisfied. This implies that the real particle obeys some dispersion relation between $k$ and $\omega$ and has an infinite lifetime, while neither of these are true in general for the virtual particle (since $\Sigma$ is generally complex). In practice, we usually relax this somewhat and call any very sharply defined resonance a real particle.

As an example, take one of the simplest Feynman diagrams for electron-positron (Bhabka) scattering: 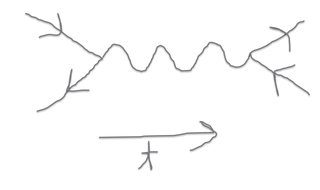 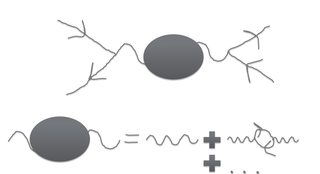 This exact interaction between the electron and positron, as mediated by the electromagnetic field, is what corresponds to the Strassler sense of a virtual particle. Physically, it is a general disturbance in the electromagnetic + electron/positron fields. It does not have any constraint relating energy and momentum; both enter into it as independent variables. It is described by some complicated propagator, which practically speaking can only be evaluated perturbatively. In the limit of only the simplest tree-level diagrams, it will sometimes be identical to the internal line sense of a virtual particle, but the identification does not seem to me to be that precise.

Of course, whether this redefinition is an improvement is a subjective question that you may decide for yourself. The advantages of it are that it makes "virtual particle" into an actual physical phenomenon, which is important but doesn't seem to currently have a snappy name, it is at least somewhat related to the definition in terms of internal diagram lines, and it makes those popular pop-sci statements like "the Couloumb force/ Casimir effect is due to virtual photons" at least closer to being truthful. The main disadvantage, in my opinion, is simply that careless use of the term "virtual particle" already causes a lot of confusion and promoting another definition might only add to that.

*I take responsibility, of course, for any errors in understanding or interpretation of this viewpoint. Also, I will use "virtual particle" to mean the Strassler sense, except where noted.

**Since this integral does include the values in which the real particle dispersion relation happens to be satisfied, it seems to me that in the Strassler definition it is really a broader category of disturbance that includes real particles as a special class, rather than being mutually exclusive.

knzhou asks, how does this relate to the state of the photon field? Well, the Feynman diagram I've written above (in perturbative and exact forms) represents the amplitude for the process:

where the quantum numbers are the state of the EM field, the electron, and the positron. Which is to say, scattering that leaves the EM field undisturbed asymptotically. To find the actual state of the EM field and how it evolves, you would have to find the amplitudes that it is changed as well: $\langle 1_q, k_4 k_3 | 0, k_1 k_2 \rangle $, $\langle 1_q 1_{q'}, k_4 k_3 | 0, k_1 k_2 \rangle $, and so on as high as you like. Then for a given pair of input momenta, you can Fourier transform all of these back to real time and string these together to find out how the field configuration evolves, either in the Fock basis that it was calculated or the actual spatial profile just by adding the appropriate cosine terms for each photon occupation. If you undertake that, please do let me know what it turns out looking like ;)

I can hear you protesting now: I've only given you a recipe for the EM field configuration in terms of asymptotic final states, when you asked specifically for the intermediate state (and in particular, how this relates to virtual particles). But this is the only thing it makes sense to specify. This is already true in regular quantum mechanics. For an atom decaying from an excited state, maybe with a state that looks like

you will sometimes hear people ask what the state is "in the middle of the decay." It is a natural question, but ill-defined nonetheless. So it seems to me that the statement that "virtual particles do not have a state" is true for either of the definitions of virtual particle discussed here.

In conclusion, it seems to me that the fields are divided up somewhat differently in QED than in classical electrodynamics. In the classical theory it's totally normal to consider the total E and B fields from both sources and radiation, and add them up and look at the impact of this total field on some charged particle. But in QED there is no state associated with this "total electric field"- you look at effects from radiation and effects from other charges (mediated by the EM field) separately. The former are real photons, and the latter are what Strassler would call virtual photons.

Firstly, in the classical context, at least in the linear case, the notion of a virtual particle does not work. The reason is that the state of a particular system would be superpositions of solutions of that system's equations of motion. Hence, all such states would be "on-shell." One may find evanescent solutions, which might be considered analogous to virtual particles, but they differ from virtual particles in the sense that they are still on-shell. Virtual particles do not satify the equations of motions for the free-field and are therefore "off-shell." How much this scenario changes when the classical system becomes slightly nonlinear, I cannot say.

As for the quantum (field theoretical) interpretation of virtual particles, I want to be contrarian and argue in favour of the idea that one can indeed consider them as the constituents of the static EM field. For this purpose consider a Feynman diagram for the scattering between two fermions via the exchange of a photon (tree-level). In this diagram the vertices represent points is space-time (which we integrate over) and the internal line represents a propagator or Greens function, which also represents an integral over momentum space; i.e. one can get such a progagator from an integral over all plane waves in momentum space. Momentum conservation at the vertices requires that the internal line is (mostly) off-shell and therefore it is interpreted as representing a virtual particle.

So on the one hand we have the notion of a propagator composed of several plane waves and on the other hand we have the virtual particles. To match these two notions we need to include the possibility of plane waves that are off-shell, connecting the two vertices in the diagram. Being off-shell, the strength of the contribution of a particular configuration of this diagram will depend on the distance between the two vertices; the contribution becomes smaller as the vertices move further apart.

Now consider the situation where we fix the one vertex. One can see this vertex as the one fermion (charged particle) producing a static field that the other charge particle feels. This field is precisely that which is represented by the internal line. Prior to the integrations, the line is just one off-shell plane wave. The integrations now represent a complicated (inverse) Fourier transform processes that reproduces the whole scenario of a particle from the diagram. So that in the end we have a charge particle with the static field around it and another charge particle that scatters from this static field.

I do realise that this explanation leaves one the option to either accept or reject it, but we need to understand that questions of this kind are difficult to answer in a scientific manner.

Not the answer you're looking for? Browse other questions tagged quantum-field-theory virtual-particles or ask your own question.

10
How does gamma-gamma pair production really work?
21
Deriving the Coulomb force equation from the idea of photon exchange?
7
Why does an electron react differently to a virtual photon in the interaction between two electrons and between an electron and a positron?
6
Virtual particle density in an expanding Universe
2
How does the Wave Particle Duality fit with Quantum Field Theory?
2
What is exactly a quantum fluctuation?
4
What is virtual particles?
0
Is virtual particle a relativistic or non-relativistic effect?
1
The model of photon scattering, is actually about a complete absorbtion?
1
What kind of particles can be virtual? Only those in the table of the Standard Model?
See more linked questions