Why don't barbells tip over when a 45 is placed on one side?

A standard barbell is 45 pounds, as is the heaviest weight available in most gyms. When a weight is placed on the side of a barbell, some of the barbell is to the "outside" of the weight, like so, so the mass of the portion outside the rack is greater than the mass inside the rack. 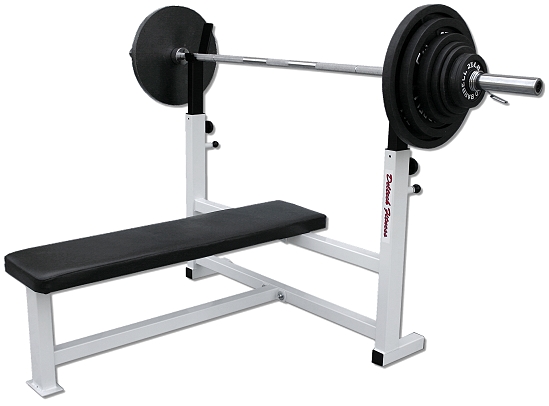 Why doesn't the barbell tip over?

Here is how you can calculate it: 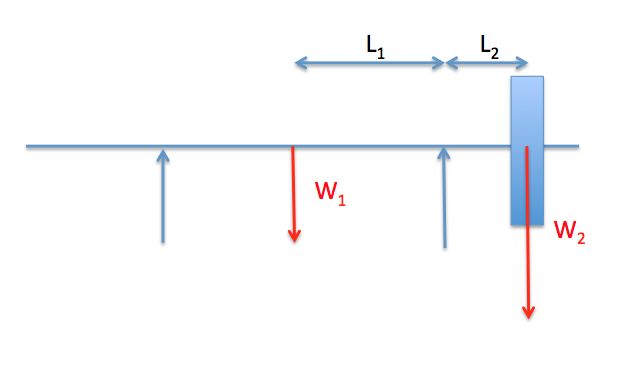 The picture shows a simplified "asymmetrical barbell". The weight of the bar is $W_1$, the weight of the disk added is $W_2$. Now the bar creates a counter-clockwise torque about the right hand support of $W_1 L_1$, and the disk creates a clockwise torque of $W_2 L_2$. As long as the net torque is negative, the bar tries to rotate anti-clockwise, and a little bit of force from the left hand support will keep the whole thing in equilibrium. But the moment the clockwise torque becomes too big, the bar will tip.

This can be done by either moving the weight further out, or moving the support further in, or by adding more weights on the outside.

Incidentally, you can find the center of mass of the setup that you have by finding the point where you can lift the bar-plus-weight without it tipping in either direction: so if you wonder "how close is this to being unstable?", just try to pick it up with two hands close together. If you end up picking it up close to the end, you're close to the tipping point.

Final point - as $W_1$ becomes bigger, the system becomes more stable; intuitively you know this, as it is very hard to tip a barbell when it's heavily loaded on both sides. In the drawing that I made, I used an "empty" bar: but if you have a center amount of weight symmetrically on both sides, you can think of that weight as contributing to the weight of the bar $W_1$, not the "extra" weight $W_2$ that causes tipping. 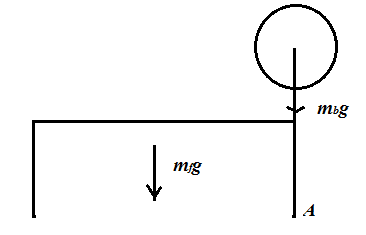 Because the barbell is symmetrical, its weight $m_bg$ cannot exert a moment about the point $A$.

Standing on its own the barbell would be meta-stable but in combination with the frame and its weight $m_fg$ this is a stable arrangement.

Not the answer you're looking for? Browse other questions tagged forces torque free-body-diagram statics equilibrium or ask your own question.

5
What determines the (minimum) angle at which a domino falls over?
2
How does length of the bar affect force on the muscles?
1
Shelf always tipping over when pushed, thanks to normal force
0
Why doesn't friction cause imbalanced forces like weight or $F_{\rm applied}$?
0
Lifting objects from their center of mass =zero torque?
0
Can the force on a single gate hinge ever be more than the weight of the entire gate?
0
Confusion of forces for the experiment in Pascal's Principle