I wrote an earlier answer to the question: "Is true black possible?" which addresses some of the points you mention. It includes this image of "the blackest substance known": 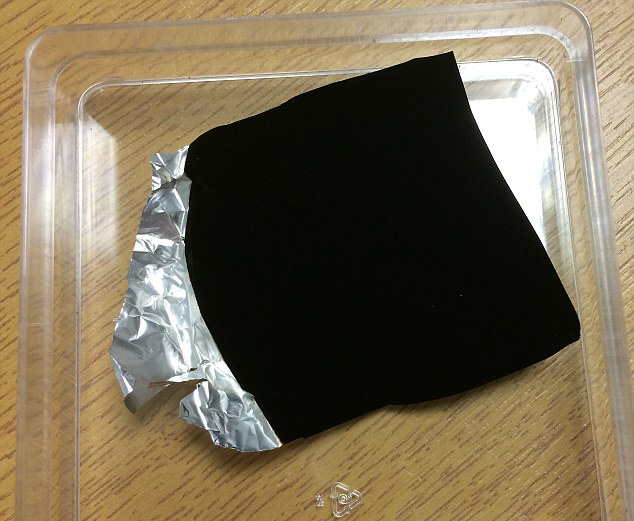 In particular, most "black" objects have a small amount of reflectivity, from which you can deduce clues about their shape. But the sample of really black material which I show is SO black that it looks like there is a hole in space - you can't see any shape in the surface, and it does indeed look "invisible" in the sense that you don't really see the object, you see a "hole". But you don't see what is behind the hole: black is not the same as "transparent", and the black object absorbs all photons. It's not actually possible to make a material that is black in one direction and transparent in the other - there's a simple argument to be made that such a material would violate the laws of thermodynamics. Instead, in this world we're stuck with the "reciprocity theorem" that tells us that blackness is a two-way street.

Black is entirely a construct of your brain, created internally to fill in a spatial region in which you eyes detect no appreciable level of photon emissions. That may sound a bit surprising, but try this: Imagine red, then green, then blue. You could do it, right? Well, no photons were involved there either. Black is the same idea, since it too is something created in your brain without any photons from your eyes. Black is just a bit more vivid because it is directly linked into your external perception systems as a way to fill in those gaps.

I will address the "see" part.

This is only partially true. We "see" the spectrum colors because the retina of the eye responds to the frequency. But at the same time the retina and the brain have a system that builds up colors from combinations of frequencies, even two frequencies are enough to produce color perception in the brain.

As long as there is a discontinuity in the index of refraction ( real or imaginary parts) then there will be a reflection from the "black" object. How your eye-brain perceives it is a different matter..

From a physics perspective you are correct, we should not see the object. We should see a hole, a complete absence, like looking into the face of a shadow rider or a dementor.

However, from a biological and neuroscientific perspective, we autocorrect. The limited light is detected by the super sensitive rods on the edge of our retina, limited information gets sent via ganglion and bipolar cells, down the optic nerve, through the thalamus and lands in the visual cortex near the back of your neck. This is where we create the virtual object which "pops out", at which point, your interpretation/version of what exists deviates from what actually exists. An interesting experiment would be to take a photo (as the one above) and look to the photo and then to the real object side by side, although your brain may also compensate for the photo and pop out an object!

The retinal rods and visual cortex (occipital lobe) also explain why we only see in black and white in low light.

I was actually interested in your questions on brane theory and faster than light travel but it seems that these don't conform to flat earth theory so were closed and unanswerable :) On brane theory, I would guess yes, different fundamental laws, simply from analogy with air versus ocean. If you walk on the beach you create constructs of sand, you walk to the ocean bio-dome and "cross over", then you are underwater and everything changes. Dimensions must exist and perhaps facilitate the electron jumping lobes in the p-orbital, the "cross over" must be a common surface but the other side would be largely independently governed.

On the faster than light, there was a good "faster than light" wikipedia entry. I would guess that yes, time would reverse but not in the "back to the future" sense. As with the 'why do we see black?' question, I would anticipate biology to act independently to physics and so time reversal is not the secret to eternal youth and once a cause has had an effect, it would not reverse. Further, I'm not sure relativity or newtonian physics would apply anyway, so if you want to travel across the universe, perhaps instead, you would be better off seeking out schrodinger's errant pets and missing electrons in your higher dimension.

We don't actually see light itself. We see objects which emit, reflect, absorb or refract light. Where the light strikes our retina and which cone is triggered allows the brain to create images because of contrast. This visual representation of reality is what we see. Because we have binocular vision this image appears 3 dimensional. Of all the species on the planet, ours is the closest to objective reality but we only actually see about 1% of the universe.

3
Color of macroscopic objects on molecular level
1
Green light on red article
7
Why do we see brown light?
4
Physics of color: why do visible colors absorb all colors except the color itself?
0
Why do objects not appear invisible?
5
Why shadow of light that goes through colored glass becomes colored?
1
Color reflection depending on its spectrum
25
What determines whether colors you can't see are visible or not?
0
Why i see the golden glow of sunlight on green leaf during evening although an object absorb all the colour and reflect a particular colour light?