Why do rain waves form and what is their connection to the texture of the surface they're on?

When it rains and water flows down an inclined street, ripples may form that are carried along with the current. Here's a picture with an example of what I'm talking about 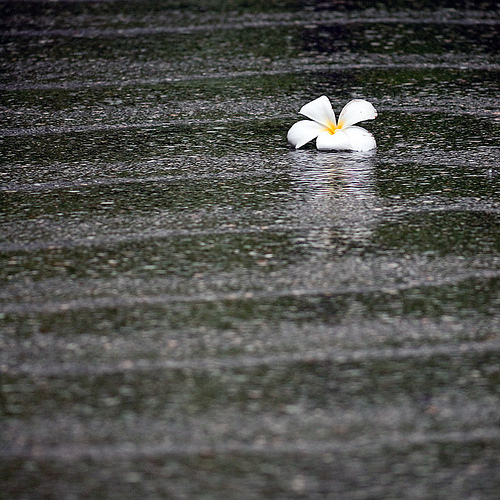 I'd like to know what the fluid mechanical mechanism is for the formation of these waves. A quick google search reveals that they've been identified in some scientific literature as "rain waves" (if you have a jstor subscription you can see http://www.jstor.org/stable/4297089?seq=1) but I've only been able to find phenomenological descriptions of their properties without any details of the physics giving rise to them. In particular, I'm curious if people think that the surface on which the water is flowing must have a particular texture in order to give rise to the waves.

I have a very slightly different answer to that of Bernhard above, but it relies on the same Plateau-Raleigh Instability idea.

The speed of a thin layer of water flowing is going to be slower than a slightly thicker layer. So I expect that thin layer would flow more slowly and water in a thicker film would tend to catch up with the thin layer and build up to form a faster moving 'little wave' or 'ripple'. The wave would leave behind a very thin layer of water wetting the ground before the next 'ripple' comes along.

I guess this may be similar to how a flag flutters.

Ultimately I think if water is flowing down a flat surface the mechanism of flow will change as the flow rate changes from laminar to 'ripples' to some other type of flow and at some point turbulence will be important - this is classical behaviour of a non-linear system where changing a parameter (water flow rate, for example) can change the mechanism of what is going on. By contrast linear systems (e.g. SHM Simple Harmonic Motion) always show the same behaviour (eg for SHM - oscillatory behaviour, but with amplitude and frequency determined by initial conditions/system variables)

This answer will be my hypothesis, I am by no means absolutely sure about this answer, but want to share my thoughts.

Considering the thickness of the liquid film and the inclination of the surface, it may be an interplay between gravity and surface tension. This may be an example of the Plateau-Rayleigh instability, which can for example be seen at the break-up of the stream out of a faucet into droplets.

Except surface tension itself, you also encounter wetting behaviour here, which may be the reason that you see the long vertical streaks. So my intuition would be that gravity controls the speed of the streaks, the wetting/contact line the shape and surface tension controls the width or wavelength.

In other words. If you have a liquid film due to the rain, gravity is the downward force. The wetting behaviour at the front of the film, is a force acting opposite to it. Surface tension now controls that liquid behind it. At some points, the film breaks up, again by surface tension (Plateau-Rayleigh), giving you a new front and the story repeats.

Typically what you begin to see further downstream from these types of waves is a rotational component to the flow. The water appears to "roll up" in the cross-flow direction and you get "bursting". An example of what this may look like is in the lower right of the figure (this is a top-down view of a boundary layer over a flat plate)(source): 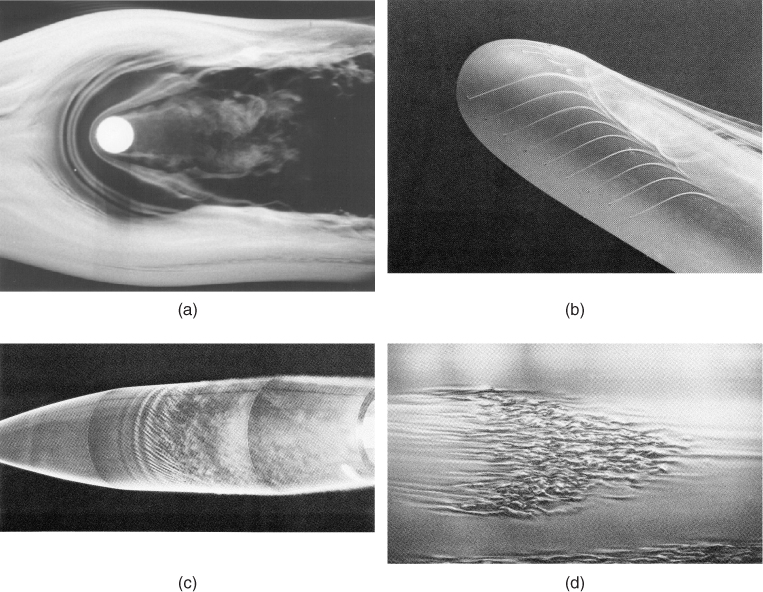 Basically the T-S waves grow as they move downstream and eventually burst, causing a cross-flow vorticity and turbulence forms. Similar patterns can be seen in water flowing down a river, or I would argue, thin sheets of water flowing down the pavement.

Not the answer you're looking for? Browse other questions tagged fluid-dynamics waves everyday-life or ask your own question.

84
Why does rainwater form moving waves on the ground? Is there a name for this effect?
-3
Why do heavier objects roll faster down a hill?

1
Why in fluid interface, liquids tend to reduce their surface?
2
Inertial Waves - Why neglecting the advecting term?
13
Why must traveling waves have the same amplitude to form a standing wave?
3
Why do the black balls floating on top of the water surface form lattice strctures?