Why is compressible flow near the choke point so efficient?

Imagine a steady state, one-dimensional, compressible flow in a horizontal pipe of constant cross sectional area. This flow can be isothermal, adiabatic (Fanno), or diabatic (Rayleigh). As an example, the relevant macroscopic energy balance for Fanno flow is: $$\Delta h=-\Delta (KE)$$
In other words, Fanno flow converts enthalpy into kinetic energy. Below are Fanno lines for a real gas (steam) for different flow rates at the same pipe ID and inlet conditions. 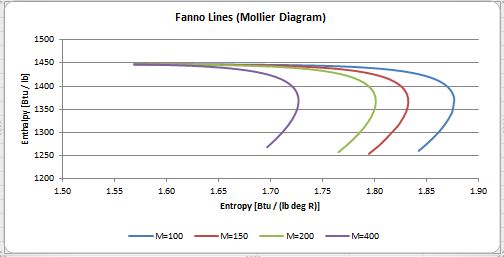 The lines clearly indicate the "efficiency" with which enthalpy is converted to kinetic energy. At low velocity (left upper portion of lines), almost no enthalpy is converted while the entropy generation is large (the line is nearly horizontal). Near Mach 1 (the rightmost maximum entropy point for each curve) the enthalpy conversion is high and entropy generation is nearly zero (the line is nearly vertical). This happens whether you are originally subsonic (the upper branch) or supersonic (the lower branch). Another way of saying no entropy generation occurs is that the viscous losses (friction) are zero. This would imply that the molecules no longer impart (as much?) force upon each other near the choke point. This seems absurd.

In isothermal flow, you also find that as you near the choke point (interestingly, below Mach 1!), the flow approaches frictionless.

As I understand it, these examples are physically realizable flow regimes (if obviously very short in length scale). Why is compressible flow so efficient near the choke point? Is something at the molecular scale really going on or is it simply a poor mathematical model at these velocities?

UPDATE: Obviously, in the supersonic regime (lower branch), the reverse process takes place, i.e. kinetic energy is converted into enthalpy. Still, my question holds since this conversion is nearly perfect as you approach Mach 1.

Instead of thinking about the efficiency of the acceleration, think about the flow itself; the flow is in its maximum entropy state at the throat. Any additional dissipative force would shift the choking location, but it would still occur at Mach 1.

Not the answer you're looking for? Browse other questions tagged thermodynamics fluid-dynamics or ask your own question.

3
Increase thermal efficiency of combustion engine by using heat of coolant/exhaust?
8
Spontaneous conversion of heat into work at negative temperatures
1
Intuitive explanation for lower pressure above airfoil
0
Compressible Poiseuille Flow
0
Calculation of heat generated due to friction for air flowing through a pipe
2
Zero velocity divergence for incompressible flow is derived from conservation of energy equation or conservation of mass equation?
1
Is gas flow always compressible?
1
Flow in parallel vertical pipes
1
Arriving at the definition and purpose of enthalpy