Is white a single color? [duplicate]

We have seen the Newton disc, when it is rotated it produces white color. So I want to know whether white exists as a single color or is that a combination of multiple colors?

It depends on your definition of a "color". There is a crayon in my box of coloring pencils that is "white" - you could call that a single color. But if I look at the spectral components of a light source that my eye perceives as white, there could be many different compositions, all of which look "white" to me. It might be "all the colors of the rainbow" (like sunlight), it might be just the right mixture of red, green and blue (like the screen I am looking at while I type this), or it could be another mixture such as is generated by the phosphors of LEDs and fluorescent tubes that attempt to produce "white" light.

See for example this answer and the links contained therein, for more information. In particular, look at Why can colors be mixed? and Colors from a computer vs. colors from visible spectrum of the sun

Following the discussion in the comments, I dug up the spectral characteristics of a couple of different displays from this paper. Clearly there are three peaks ("colors") present in both - while there is a lot of difference between the CCFL and LED displays, there is not a continuous spectrum in either of them. 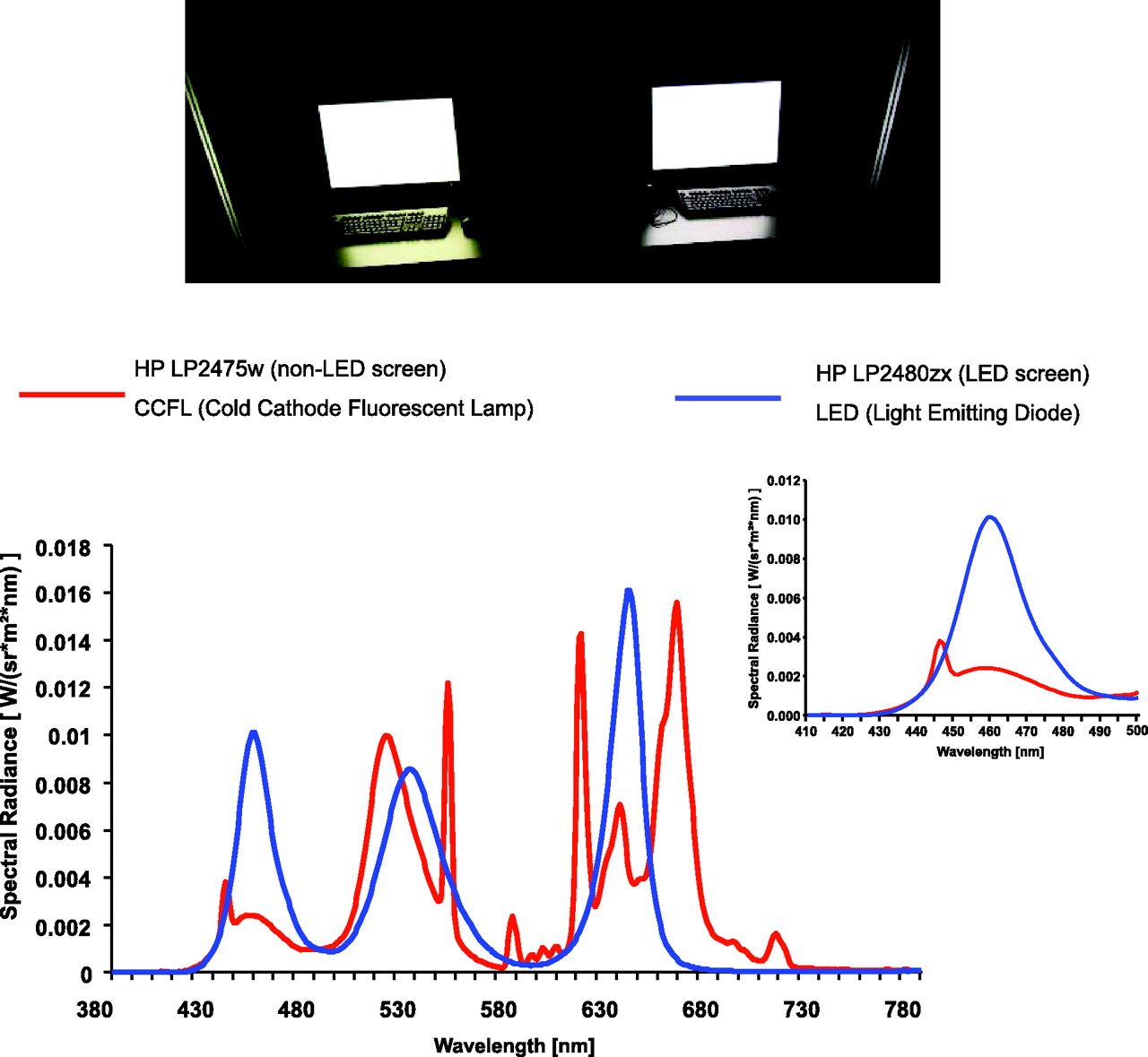 Newton demonstrated that white light could be broken up into its composite colors by passing it through a prism, then using a second prism to reassemble them. He also discovered that sunlight is composed of light with wavelengths across the visible spectrum. Concluding that since all colors produce white light then white must be made up of all colors is a common logical error called affirming the consequent, which might be the cause of the misunderstanding. 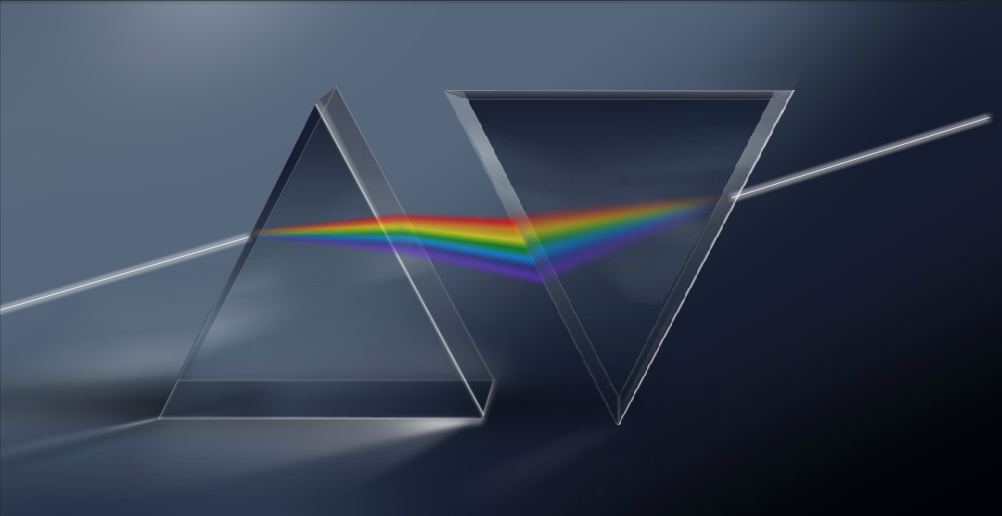 Color is just a "projection" of spectrum to what we can perceive. So... almost every color can be reproduced in ifinitely many combinations of different wavelengths! Essentially, your real physical state is a function $j(\lambda)$ that for every wavelength $\lambda$ tells you the intensity of the light. You have an infinite amount of information here, as the curve can be anything.

What you see is the sum of contributions of each wavelength, each with its own efficiency (weight) to the response of three different types of cones (it's a bit more complicated than that, because there is receptor saturation, adaptation, neural post-processing, the rod sensors and so on). Mathematically, you "see" three numbers, each defined as $$\{r,g,b\}=\int_{\text{spectrum}} j(\lambda) \{R(\lambda),G(\lambda),B(\lambda)\}\,d\lambda$$

So as long as these three numbers are the same, the color is the same. In addition to integration over the spectrum, your eye also "integrates" over the response time (it can't keep up, it accumulates everything it receives in some period, some 20-50 "frames per second"). So a spinning disk of colors "fakes" actual addition of multiple spectra by sequencing in time too quickly to separate visually, just as a computer screen puts them too close together to resolve spatially. However, the spectral physics is the same. So...

You know you can make white in many different ways. Sunlight has a black body spectrum (continuous). Then you have all these fluorescent bulbs with somewhat different spectra (with many broad bands), and then you have LEDs with essentially line spectra (single wavelengths). That's true for other colors too. Orange can be a single wavelength (sodium lamp, for instance), or red + yellow wavelength (2 LEDS), or full-red + half-green on a computer screen (again, each of these has its own spectrum) or a continuous stretch of wavelengths between yellow all the way to a bit of green. It matters not, the eye will see them all the same. Well... there's a catch. When you illuminate a sample of one spectral color (which tells which color is reflected in what amount) with a light of some other color... the spectral responses are multiplied ("reflection from the object" times "intensity of incoming light"). So... you can have two light of the same color... and two papers of the same color (but different spectra)... and they will not produce the same result in all combinations. Consider an extreme example where all papers and lights deal with discrete wavelengths: paper A [red + yellow] and paper B [orange]. And light U [orange] and light V [red + 0.5green]. Now illuminate: Paper A under light U looks black: the orange wavelength is not reflected, but absorbed. Paper A under light V looks red: the green component from the light is absorbed and not seen. Paper B under light U is orange. Paper B under light V is again black.

This reason is, why artificial lighting, especially if the spectra are narrow stripes instead of continuous, makes some things look weird and unnatural, and possibly don't display nice on camera (as the entire spectrum is again multiplied by the camera sensor's response function, the type of the camera matters too!). Mostly, it's not as bad as illustrated before, because discrete-wavelength materials are very rare (must be special-made and expensive). But discrete-wavelength lights are more and more common, and color consistency is becoming a problem.

I propose an experiment. Get a yellow light, possibly sodium-based... make two discs... one pure yellow... one half-red half-green. In white light, they may look similar when spinning. Under yellow light, the second should look darker... depending, of course, on the spectral responses of the yellow pigment you use.

Not the answer you're looking for? Browse other questions tagged visible-light reflection or ask your own question.

5
Newton's color Disk
3
Physics of color: why do visible colors absorb all colors except the color itself?
0
How do white neon lights work?
3
How is white light created by complementary colors?
2
How does the white color inside/below a rainbow arise?
0
White Light Bending Order
2
Color of Every gas should be white?
1
How does a wave become a color?