How to relate heat build up in an open pipe to sound frequency and specific heat capacity of the pipe's material.

I am designing a physics experiment with my clarinet. A temperature probe and a microphone graph changes in temperature and sound pressure, respectively. I am trying to demonstrate how different woods effect the performance of the clarinet through their specific heat capacities as the speed of sound is directly proportional to the temperature, and so changes pitch by some cents, damaging performance. I have one clarinet and the comparison will be made mathematically by taking the specific heat capacities of other woods. But, how should I relate heat build up in an open pipe to sound frequency and specific heat capacity of the pipe's material in order to demonstrate what wood is best for clarinet builds by taking these physical parameters?

When you blow air into the clarinet (or any wind instrument), several things happen:

The things that affect the pitch are

The speed of sound depends on

The ratio of pressure over density depends on

The temperature dependence you are talking about will have a couple of different effects; let's try to estimate their relative magnitude. Assume that the room temperature is 20°C, and that the temperature of the clarinet will increase by 2°C as you start playing. How much would that affect each of the terms discussed?

The coefficient of linear expansion of wood depends very strongly on the direction, being about 10x greater across the fiber than along it. I suspect that a clarinet is built with the wood along the length, in which case the coefficient of thermal expansion is about $3\cdot 10^{-6}~\rm{/K}$ source. The following table, from the same source, shows some of the variation between different types of wood: 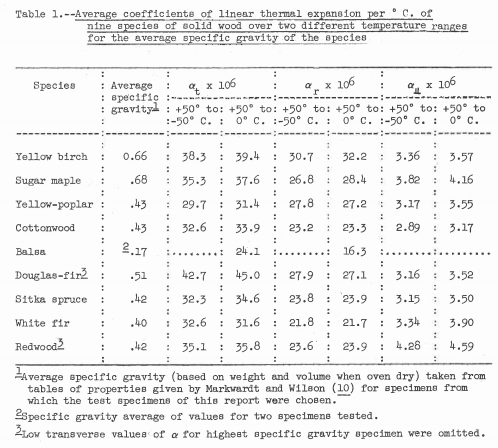 We conclude that a 2°C change in temperature will change the length by 6 parts in a million - so a concert A (440 Hz) will change by 0.002 Hz. It is safe to say you would not be able to hear or measure such a small change. Note that cheap ABS instruments have a coefficient of thermal expansion that is easily 10x greater; over a wide range of temperatures they might have a small but noticeable shift in pitch.

All things being equal, speed of sound varies with temperature because, at constant pressure, the density will increase as temperature drops. It is easy to see that this results in a square root relationship with temperature (not "directly proportional" as you stated in your question):

However, the temperature will also have a strong impact on the density of the air due to the saturation effect I described earlier. Data on saturated vapor pressure can be found on this page. I took some of the data and fitted a curve, then interpolated that curve over a smaller range. This gave the following values:

We can do a similar analysis for the exhaled carbon dioxide: according to "Quantitative Human Physiology: An Introduction" by Joseph Feher, the partial pressure of $\rm{CO_2}$ in expired air is typically 40 mm Hg - this obviously is going to depend a bit on how "fresh" the air in your lungs is, so the number will increase towards the end of a long breath. Using the same analysis as above, but replacing "mean air" with carbon dioxide, we find the effect of carbon dioxide (molecular mass = 44) quite large: an increase in density up to 2.8%, and therefore a decrease in pitch up to 1.4% or up to 6 Hz. Clearly, the concentration does not change by quite so much - but I believe it's a factor that needs to be controlled for a careful experiment.

Finally - the heating of the clarinet wall will be caused only by the expired air, not by sound pressure of the music. The power levels in sound, and the corresponding displacements, are surprisingly low, as I explored in an earlier answer. Further, since sound in the audible range propagates mostly adiabatically, it simply doesn't have time for any heat to be transferred (during one half cycle it increases in temperature, and during the other half it decreases; these changes happen so quickly that no significant heat transfer takes place. This was described in this earlier question / answer

Here are some graphs showing various relationships between temperature, pressure, humidity, and speed of sound - taken from http://www.phy.mtu.edu/~suits/SpeedofSound.html :

Not the answer you're looking for? Browse other questions tagged thermodynamics acoustics or ask your own question.

43
How much air needs to be displaced to generate an audible sound?
1
Are sound waves adiabatic or isothermal?