How do we imagine a Hadamard gate acting on the Bloch Sphere? [closed]

The Hadamard gate is a 180 degree rotation around the diagonal X+Z axis of the Bloch sphere. 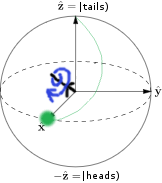 The second part of your question is about emulating this rotation using only rotations around the X and Z axis.

The construction you give is X-rot 90°, Z-rot 90°, X-rot 90°. But don't forget to include the phase correction term! The Bloch sphere doesn't track the global phase factor, which is usually fine since it only matters when you're performing a controlled operation, but your particular case does involve controls. That $e^{i\alpha}$ term, which ends up being an $R_z$ gate on the control wire of your construction, is important.

A quick way to convince yourself that a combination of rotations matches some desired rotation is to track what it does to each of the six cardinal points. Any rotation that gets all of them right has to be correct for all the other points.

Not the answer you're looking for? Browse other questions tagged quantum-mechanics quantum-information quantum-computer or ask your own question.

2
Rotation on the surface of the Bloch sphere?
1
Rotations in Bloch Sphere about an arbitrary axis
5
How to understand Bloch sphere representation?
9
Visual interpretation, on the Bloch sphere, when Hadamard gate is applied twice
0
Hadamard transformation acting on Y axis of the Bloch Sphere
1
Trying to prove the Hadamard gate leaves a state unchanged
0
What does $e^{i\alpha}$ stand for in the general expression for a qubit gate $e^{i\alpha}R_n(\theta)$?
2
Why are rotation operators and Pauli rotations defined so that $R_x(\pi)\neq X$?