There seems to arrive much confusion on this topic. I've updated the answer here to give a clearer picture of what goes on.

Consider a star instead of a ball rolling down the incline: 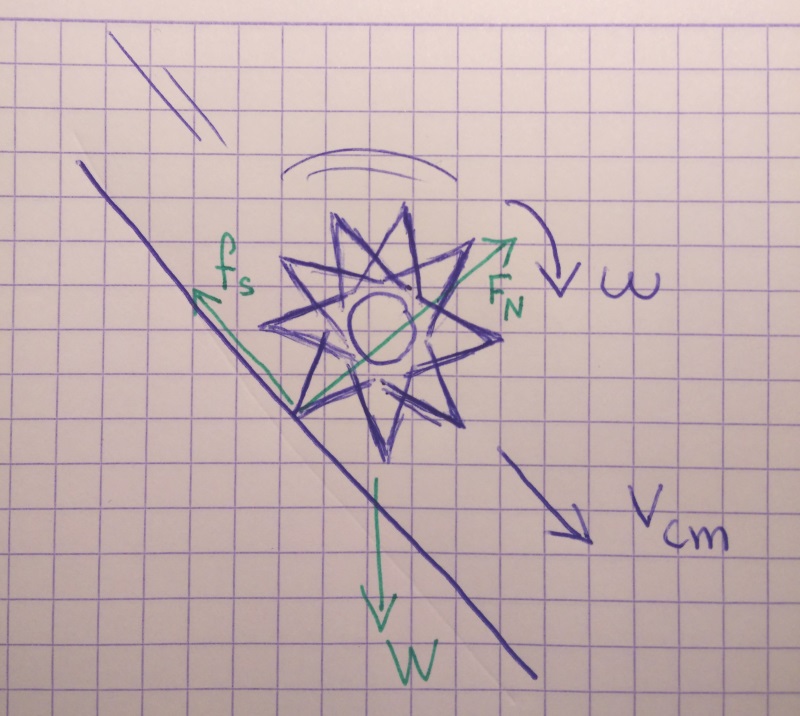 For it to roll without slipping, whenever a leg is touching the ground it must stand still (it must not slip or slide). That means that during the time of contact for one leg, all forces must balance since the net force must be zero when there is no acceleration. (During this contact, the situation can therefore be considered a leg / cone / box or another object standing still, that is motionless, so that Newton's first law simply applies, if this helps the intuitive view).

There is a normal force $F_N$ and of course the weight $W=mg$. They pull as shown on the drawing, but those two alone do not cancel out but will result in a net force downwards along the incline.

So, to avoid this acceleration down the incline, a static friction force $f_s$ must be present, and it must be directed upwards along the incline.

We could add more legs to the star. If we add more and more and at some point infinitely many legs, the star becomes a complete circular wheel. Each "leg" (each point on the circle) now touches for an infinitely short period of time.

The diagram drawn above applies for each "leg" (point). The diagram below (from this source) illustrates the idea again. And note here that the velocity direction is not drawn:

The important note! These drawings are independent of the velocity of the ball. It doesn't matter, in which direction the ball rolls - up or down the hill - the drawings will be the same for the star and for the wheel. If the star rolled upwards, I would have drawn the $v_{cm}$ arrow and the $\omega$ arrow oppositely, but normal force and weight would remain the same! So static friction would also have to remain the same to keep avoiding any acceleration downwards.

Static friction has got nothing to do with the direction of rolling.

In a case where the inclined surface is not very rough, the point of contact might be slipping. Static friction is experimentally defined as:

The way i ended thinking about it is as follows: I convinced myself friction is forcing opposing motion. Now imagining a ball rolling down an incline, I considered the point of contact of the ball with the incline, call it x. This point intends to move in a direction that is opposed to the general translational motion of the ball as a whole (to be more precise, you have to consider infinitesimally small change in time from the moment x is in contact with the incline).

Note that it is "static friction" because otherwise x would remained in contact with the incline as the ball translates downward, which we refer to as "slipping".

Not the answer you're looking for? Browse other questions tagged newtonian-mechanics forces rotational-dynamics friction rigid-body-dynamics or ask your own question.