I'm working on a graphic simulation (just for fun, for an open-source screensaver) of an Aerotrim - a "human gyroscope", one of those exercise/training machines with a human in the middle, perched on a ring that swivels on an axis with respect to another ring, which swivels on an axis perpendicular to the first axis, on another ring. (AFAICT there could be 2 or 3 such axes that turn, each at right angles to the next. If I can simulate 2 axes / 3 rings, that would be sufficient. A general solution for n rings would be lovely. :-)

Simulating the thing turning, with each axis rotating at a constant rate, is no problem. But it would "feel" more real if I could apply some realistic acceleration from the interaction between the rings and the mass of the rider.

In the Youtube videos, you sometimes see a bystander push on one of the rings, to help get the rider going. Not only does that ring accelerate, but others start spinning too. And the pushed ring does not accelerate smoothly, but undergoes resistance from the other rings, apparently transferring acceleration to them.

I am not up on angular momentum, torque, and all that, so answers will need to take my ignorance into account, though I'm obviously willing to learn a few things as necessary.

I don't feel like it's necessary to take into account the asymmetry of the person's mass - modeling the person as a point mass in the center of the rings should be fine, I think. In other words I don't plan on modeling the way that the rider accelerates the rings by leaning one way or another.

I was thinking that in order to make things a little more interesting, I would have the program occasionally apply a force like a hand pushing on one of the rings. I can figure out what the torque on that ring would be if it were independent of the others, but I don't know to model a set of 3 rings connected on axes.

Any thoughts on how I could model the interaction between the rings, each affecting the others? Simplifications are fine. My intent is not to discover new phenomena through accurate physical modeling, but to create a visual display that looks more realistic than just rings turning at constant rates.

P.S. Part of my uncertainty is, how much does the Aerotrim really behave like a gyroscope? The gyroscope's main properties are focused on the mass in the middle spinning fast on its axis, and therefore its axis tends not to move. This is obviously different from the aerotrim, where the person is often not rotating much around the inner axis, and the inner axis is certainly not staying still. I wonder if other factors, like the conservation of angular momentum of the outer rings, plays more of a part in the Aerotrim that is negligible with gyroscopes.

If it is essentially just a gyroscope... I've looked at the "fundamental equation" at http://en.wikipedia.org/wiki/Gyroscope#Properties, but as a non-physicist I find it difficult to imagine how to turn that into code computing what happens when a force is applied. Pointers to example code for simulation of gyroscopes would be appreciated.

Partial answer, but still. Aerotrim has almost nothing to do with gyroscopes, except that the gyroes are usually mounted in gimbal set similar to aerotrim.

One promising way of implementing arbitrary physics simulations, is by programming in terms of 'constraints'. I highly recommend reading this article that covers constraints very well:

I was very surprised when I first saw this myself, because by declaring things like 'keep this point at some fixed distance' you are actually able to model things like a swinging pendulum without even considering torque.

The constraints for this problem could look something like this for the first circle: 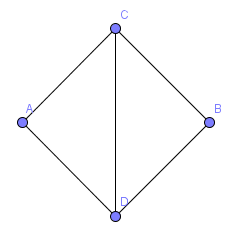 Where A and B would be fixed and C and D could move. The lines would be constraints that keep C and D at the right place. Instead of drawing the constraints, you would draw a ring so that it lines up with the points.

I left A&B out, but they're all attached. E and F would be closer than C and D and all constraints would have the appropriate length.

5
MEMS gyroscope and orientation
2
Gyroscope design: does extra mass towards the axis of rotation help or harm the gyroscopic effect?
2
Does a gyroscope stay fixed relative to the direction of gravity?
4
Gyroscope's motion explained by internal forces
0
Can/Does angular momentum apply a torque?
0
What happens energy-wise if you put a gyroscope at the north pole?
3
Confusion about what happens when the rotating axis of a gyroscope is rotated
0
Centripetal force in a gyroscope
0
Are these equations correct for the motion of a gyroscope?