Free-electron lasers are devices which use the motion of highly energetic electron beams to produce bright, coherent radiation in the x-ray regime. More specifically, they start with a high-energy electron beam and feed it into an undulator, which is an array of alternating magnetic fields designed to make the electron beam move in a 'zigzag' path with sharp turns on either side, emitting synchrotron radiation during each turn.

The radiation thus produced is added up over successive turns, and it is produced coherently via self-amplified spontaneous emission.

One common question frequently posed of this setup is: is this actually a laser? That is, does it have population inversion, and is the radiation actually emitted via stimulated emission in some suitable understanding of it? People in the know tend to answer in the affirmative, but I've yet to see a nice explanation of why - and definitely not online. So: do FELs actually lase?

FELs produce a coherent, monochromatic, intense light beam that can be collimated with an iris (basically a hole in a large lead block).

An optical cavity can be arranged by putting two mirrors around the undulators, spaced so each pass of the electrons constructively interferes (go here and click Watch a Movie on How HIGS Works to see a movie demonstrating the Duke FEL doing something like this, with an added Compton backscatter).

Is this stimulated emission in the atomic physics sense? No. Does it produce a beam of light so similar to a laser than it can be classified as such? Most physicists I've interacted with say yes.

You are missing a crucial aspect of the dynamics of a Free Electron Laser: microbunching. This comes from the fact that although electrons at different energies share basically the same velocity $c$, they have different oscillation amplitudes in the undulator, therefore they shift longitudinally.

Since you mentioned the SASE mechanism let me expand around it: the noise in the initial electron distribution will guarantee you some peaks which will start to radiate coherently (the power going with $N^2$). As the radiation slips through the bunch (remember that photons go straight, while electrons are wiggled) it exchanges energy with it, triggering energy modulations. But, as we saw before, these result in a longitudinal shift therefore we get additional density modulations at the radiation wavelength.

The result is that your initially long bunch slowly splits in a number of very short (micro) bunches, all of them radiating coherently, with a great boost of the radiation intensity gain. Of course the microbunching can not continue endlessly, indeed it comes to saturation, where the dynamics becomes strongly non linear and the gain is stopped. 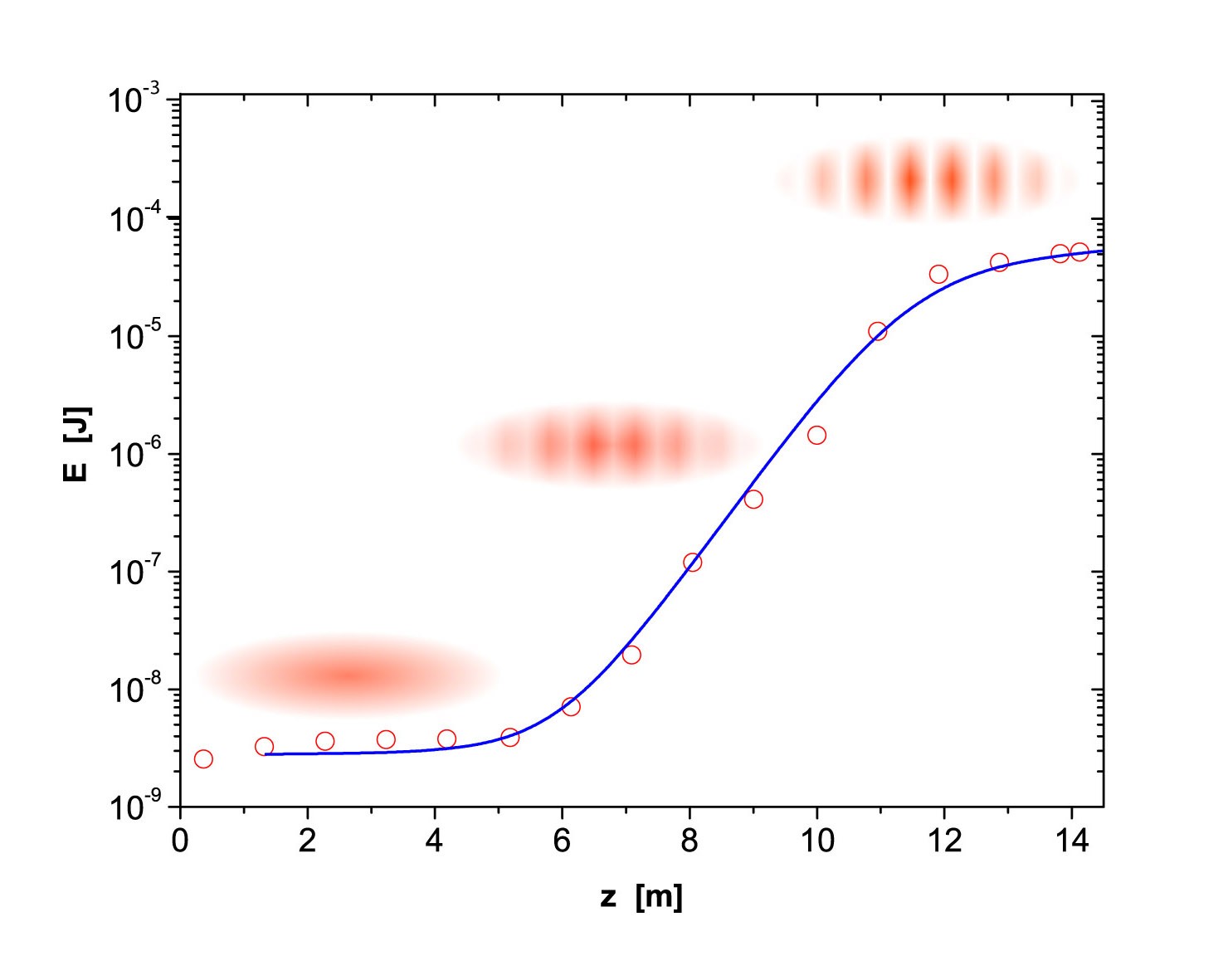 Therefore for sure you have light amplification by stimulated emission of radiation: the initial radiation stimulates microbunching leading to even more radiation, obviously this is not the standard interpretation of atomic physics, but in common English it fits perfectly. The population inversion might be seen it in the microbunching factor: the initial, more or less uniform, beam is completely "inverted", while, as long as the microbunching develops this is lost up to the saturation.

For some read up (and also source of the nice picture): FEL@Desy.de (use the menu on the left)

If you use "population inversion" as an essential part of the definition of what a laser is, then you're right it's not a laser. But that doesn't deny that the properties of light can be just light from any "laser." So, this is a bit of semantics issue, and less about the physics.

A free-electron laser (FEL) is a parametric amplifier, which operates by transferring energy to the output signal (photon pulse) from an oscillator (electron bunch running down a long undulator magnet). An electron bunch is accelerated to relativistic energies and sent through a periodic magnetic structure (undulator) where transverse oscillations and interference produce synchrotron radiation enhanced at specific wavelengths. The intensity of this radiation scales with the number of electrons in the bunch. Photons co-propagate with the relativistic electrons and if the undulator is long enough, induce significant energy modulation in the electron bunch, leading to a periodic density modulation of the electron cloud (microbunching). The resulting microbunches behave like giant charged particles, and emit photons proportional to the square of their total charge at wavelengths longer than the bunch length. So a free-electron laser is not a laser in the usual meaning of the acronym but a parametric amplifier that produces coherent radiation pulses.

Note that because of the need for microbunching for an FEL to operate, there is no FEL that can produce truly continuous photon beams as a function of time today.

Not the answer you're looking for? Browse other questions tagged laser x-rays accelerator-physics free-electron-lasers or ask your own question.