I'm struggling to understand a confusing feature of the Born rule in quantum mechanics, which is that the probability of an outcome appears to depend on how coarsely grained our measurements are. Consider the following normalized wave function in the position basis:

Here the Born rule tells us that the probability of measuring a particle at each position is $\frac{1}{2}$. But what if our technology improves such that our measurement apparatus is able to discern a fine splitting around x=-1, such that the wave function is actually:

Here is a picture that may help clarify what I'm referring to: 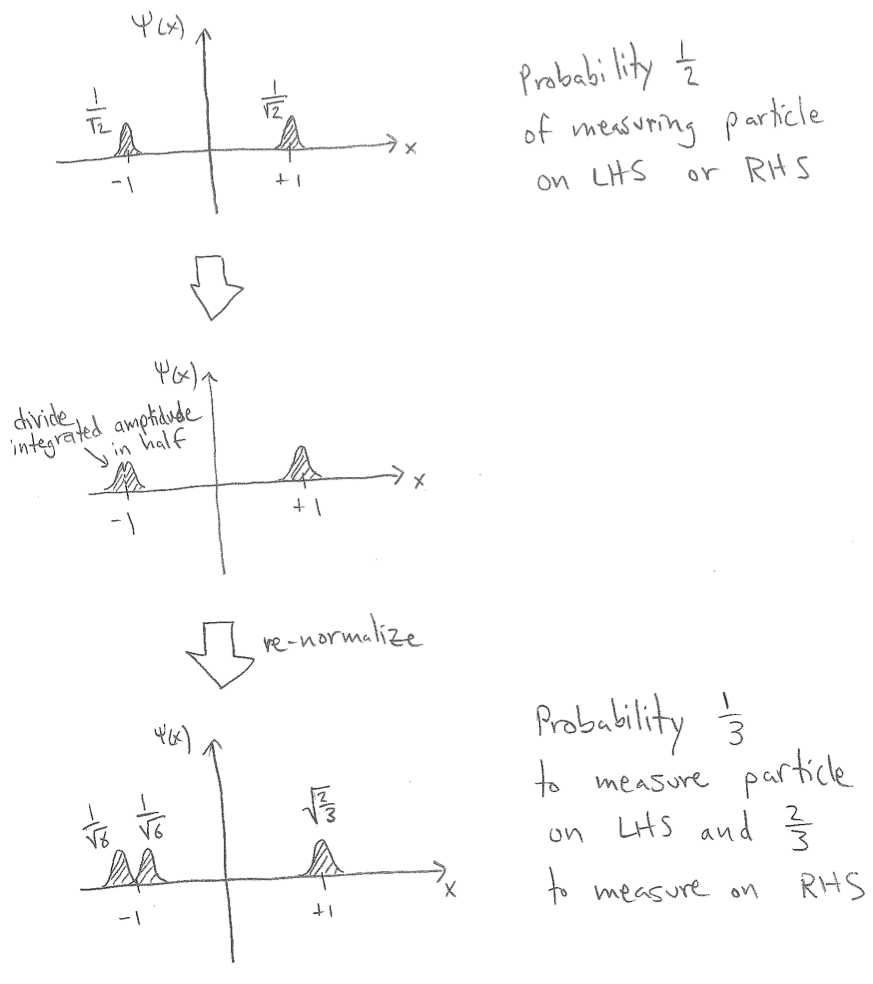 The problem (or at least what is confusing to me) is that by merely decomposing a lump of amplitude into two equal parts we have changed the experimental outcome. Where before the probability was $\frac{1}{2}$ to measure the particle on the LHS or RHS, after we normalize the above state, it becomes:

In other words the probability of measuring the particle on the LHS has been changed to 1/3 and on the RHS is now 2/3. The confusing thing is that all I have done is draw a line of demarcation between two halves of an amplitude distribution; I wouldn't have thought I was changing the physical state, but apparently I am because we are forced to re-normalized the state, resulting in different course-grained experimental outcomes.

EDIT Adding the picture below which hopefully more succinctly illustrates the confusion: 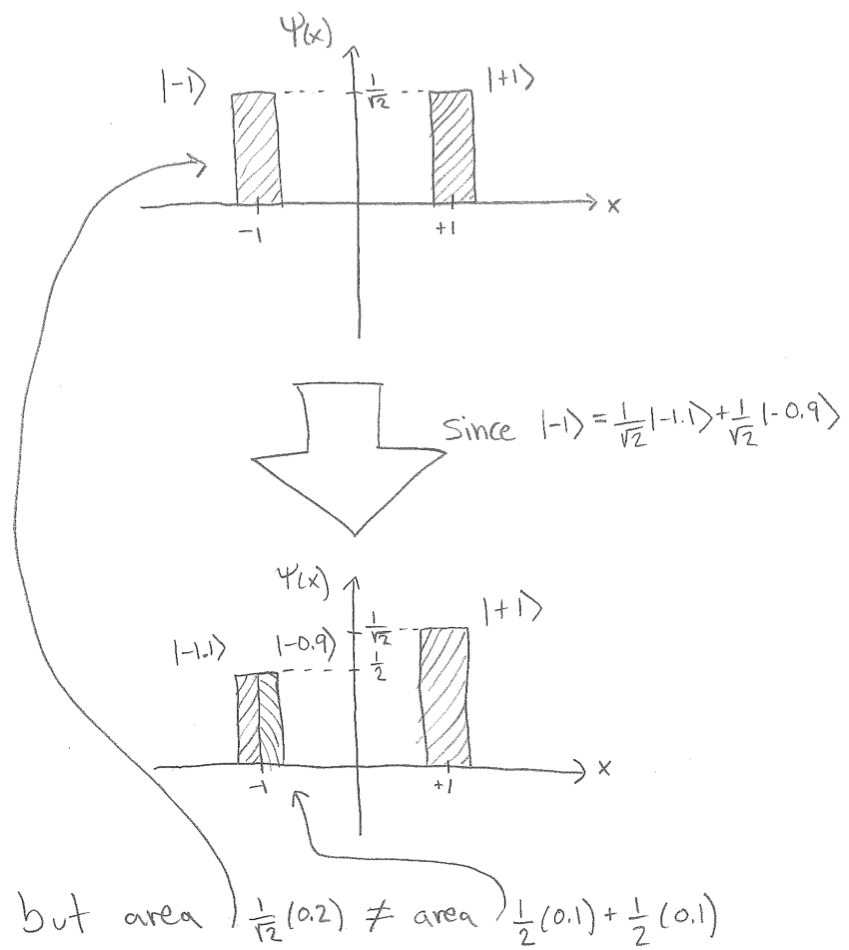 That's it. Lets look at a famous example you have probably studied before, the hydrogen atom, the part with the degrees of freedom associated with the relative coordinates of the electron relative to the center of mass. You can write some bound states like $|nlm\rangle,$ where the center of mass energy is $-13.6eV/n^2$ less than the ionization energy, the square of the orbital angular momentum is $\hbar^2l(l+1),$ and the $\hat z$ component of the orbital angular momentum is $\hbar m.$

That 3d vector subspace of hydrogen states corresponding to the same energy is called an eigenspace of the energy operator. And when you measure the energy, you only find out $n$ you don't find out $l$ or $m.$ This is normal. And it's what Peter was calling the more general measurement, but you've probably seen it before.

This does mean that we have to be careful to use labels and names that distinguish between the way the state is, and the way the measurement comes out. The state needs to have enough information to fully specify any possible measurement. The detector could have a whole 2d, 3d or more subspace associated with it.

Now if there was a magnetic field those different $m$ states might technically have slightly different energy states. But the center of mass of the hydrogen could have some motion too. So when you try to measure the energy precisely you might not be able to tell the hydrogen moving towards your light source and the lower energy versus the hydrogen moving away from your light source and the higher energy. This means you might do a coarse measurement of energy.

If instead you cooled some hydrogen gas down enough so that the velocities were small and turned up the magnetic field strong enough then the spacing between the different $m$ states might be larger than the Doppler broadening. Now you might be able to detect whether something is in the state $|211\rangle,$ $|210\rangle,$ $|21-1\rangle$ or even $\alpha|211\rangle+\beta|210\rangle+\gamma|21-1\rangle.$

So these kinds of coarse or fine grained measurements are possible. But keep in mind that the possible states of the pointer, can in general allow a whole 2d or 3d or even more vector subspace of the subject.

Next we define our operators. The coarse grained operator will be denoted $LR$ and we can define it by

Note that this a perfectly well defined operator and in particular $\Psi_{[a,b)}$ is an eigenvector with eigenvalue $-1$ if $a\lt b\leq 0$ and $\Psi_{[a,b)}$ is an eigenvector with eigenvalue $+1$ if $0\leq a\lt b.$ And the size of the subspace is huge for each eigenvalue. This is a very very coarse operator. But it can separate things on the left from things on the right. And you can instead make finer operators such as $ABC$ if you want to resolve things better. We can define $ABC$ as follows:

Clearly we could make operators that are even finer. But also keep in mind that each operator has a giant eigenspace associated with each eigenvalues, so just like the energy of the hydrogen atom we don't know the state if the subject just by stating the state of the measurement device. That's what is means to make a coarse measurement. And it's very common, it is called having a degenerate eigenvalue.

If you followed these steps you would have no questions, zero questions. So what issue are you having? You didn't do the above. Instead, you made a large number of very serious errors, including but not limited to:

This is all the physics. Make sure you understand the physics. Make you understand the math. And I tried to make it 100% look like your picture, except doing it correctly by having my notation always express things in terms of unit vectors to make the probabilities easy to compute. The wavefunction is zero or $\sqrt{5/4}$ every where before the measurement and it is different after the measurement

The problem is that the wave function should not be:

Not the answer you're looking for? Browse other questions tagged quantum-mechanics born-rule or ask your own question.

1
How do we normalize a delta function position space wave function?

2
Decoherence in Everett quantum mechanics
24
What is the difference between general measurement and projective measurement?
0
Probability of quantum transition
0
If two commuting observables do not share eigenspaces, can't one measurement affect the other due to an extra wave function collapse?
1
How to understand the kernel as a transition amplitude?
3
Probabilities in Quantum Mechanics: Measurement Outcomes or More?
0
Is it possible for the measurement to yield a superposition of states in the original space?