I'm not talking about galaxies traveling away from us red shift. I'm talking this galaxy at 2 Stationary points one on the edge and one in the center looking at each other. 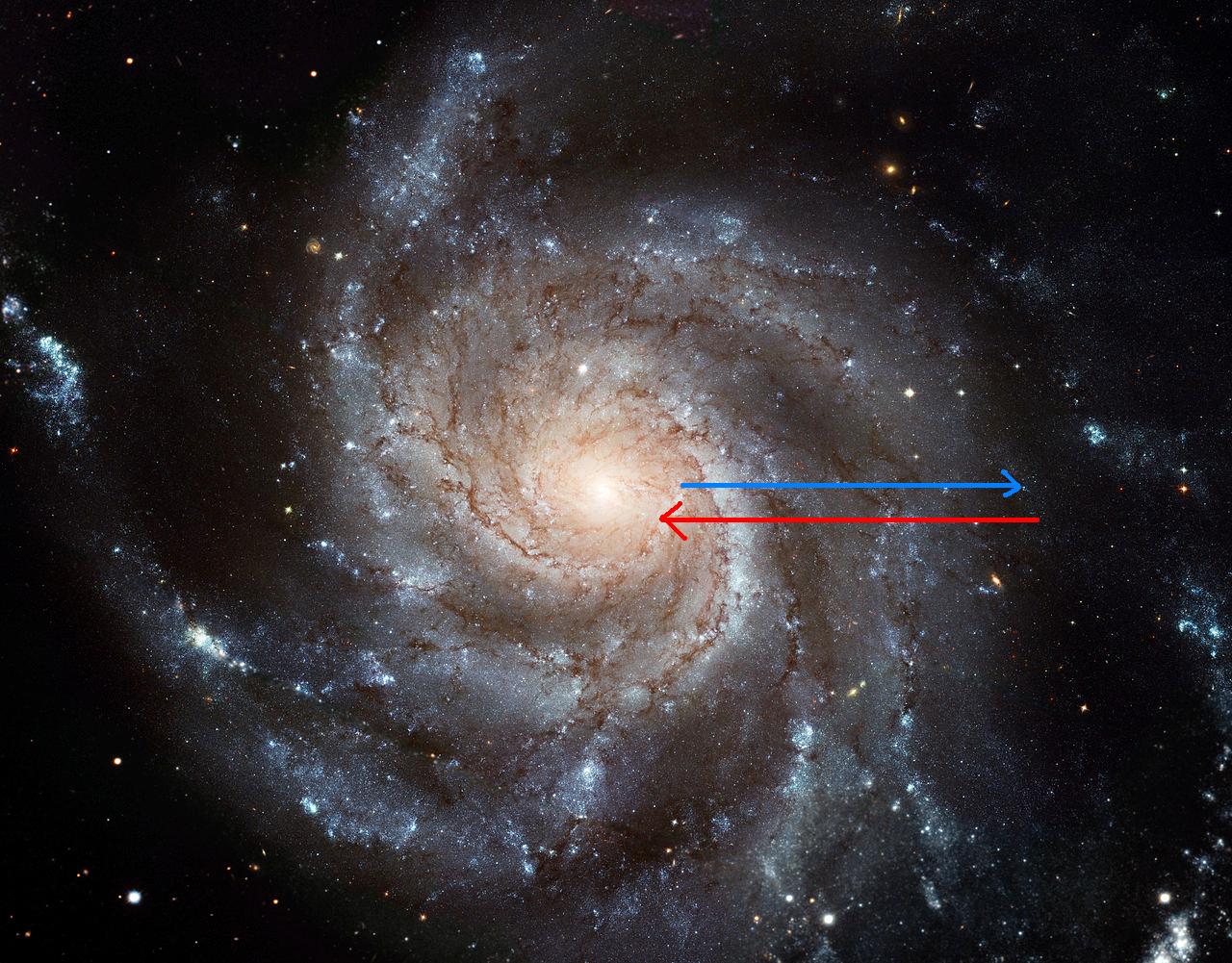 My answer assumes that by "at the center", you mean orbiting the supermassive black hole (SMBH) at the centre.

The amount of time dilation or gravitational redshift (as measured by an observer at infinity) depends on how deeply into a gravitational potential well the clock or light source is.

From the point of view of various observers that are in the potential well, what matters is their relative gravitational potential.

The potential well of our observable Galaxy will reach its deepest point at the event horizon of the supermassive black hole at its centre (or actually there will be local minima at the event horizons of any other black holes in the Galaxy). For an observer orbiting not far from the central SMBH receiving signals from Earth, they would notice that: (A) The signals were gravitationally blue-shifted, but that this overall blue-shift would be modulated by the Doppler shift caused by the orbital motion around the SMBH. (B) Events on Earth would appear to be speeded up by the same factor as the gravitational blue-shift (again, modulated by the orbital motion). These phenomena occur because the Earth is at a higher gravitational potential (less negative) than an object in a close orbit around the SMBH.

For an observer on Earth observing signals from something orbiting the SMBH, the opposite would be the case.

Both the gravitational redshift and the time dilation are governed by the same mathematical factor (though frequency is decreased, whilst the spacing between ticks on a clock is increased of course); thus: $$ \tau = \tau_{\infty} \left( 1 - \frac{2GM}{rc^2}\right)^{1/2}\ \ \ \ \ f = f_{\infty} \left( 1 - \frac{2GM}{rc^2}\right)^{-1/2},$$ where $\tau$ and $f$ would be the spacing between ticks on a clock or the frequency of a light source at the observer in orbit around the black holes, whilst $\tau_{\infty}$ and $f_{\infty}$ would what those quantities were as deduced by an observer at infinity. This formula would apply for any spherically symmetric mass distribution.

The last stable, possible circular orbit around a non-rotating black hole is at $r = 6GM/c^2$, where $M$ is the black hole mass. This means the gravitational redshift factor is $\sqrt{2/3}\simeq 0.82$. Of course an observer at Earth is not "at infinity", because the Earth has its own little potential well and is also sitting in the relatively weak (compared with the black hole) potential well of the Galaxy. Both of these are comparatively negligible in terms of redshift - e.g. at the surface of the Earth, the redshift factor due to the Earth's potential is $(1-1.4\times10^{-9})^{1/2}$ (small, but important for GPS systems); or if we say there is $\sim 10^{11}$ solar masses inside the Sun's orbit in the galaxy, then the redshift factor due to this would be $\sim (1- 1.1\times 10^{-6})^{1/2}$ (again, small compared with 0.82).

The basics of the relativistic doppler effect are covered here. For a source moving at a speed $v$ at an angle $\theta$ (in the reference frame of the observer), then the emitted and observed frequencies are related by $$ f_o = \frac{f_e}{\gamma\left[ 1 + (v/c)\cos\theta\right]},$$ where $\gamma = (1 - v^2/c^2)^{-1/2}$. This means that even when $\theta=90^{\circ}$ and the source orbiting the black hole is moving neither towards or away from an observer on Earth, that there is a "transverse doppler redshift" of a factor $\gamma^{-1}$. So although an observer on Earth would see the frequency of a source in orbit around a black hole go up and down due to the doppler shift, there would be a net redshift due to the transverse doppler effect. This effect is fully reciprocal, so an observer in orbit around the black hole would see light from the Earth with a net blueshift of a factor of $\gamma$ due to the transverse doppler effect.

On top of the net tranverse doppler redshift there will be a periodic modulation of the frequency as the source orbits the black hole. Again this would be reciprocated if the source was on Earth and the observer was orbiting the black hole). The amplitude of this will depend on the inclination of the orbit to the line of sight. At its largest, $\theta = 0$ and the redshift/blueshift will be factors of $\gamma^{-1}(1 \pm v/c)^{-1}$. Thus for a source in orbit at the innermost stable circular orbit, the maximum redshift would be a factor of 0.58, whilst the maximum blueshift would be a factor of 1.74.

NB All the above calculations assume a non-rotating black hole. The details are different for spinning black holes, but are qualitatively similar, and the fact of reciprocity remains.

If you are also asking what size of redshift/blueshift is detectable - at present, (optical) astronomical spectrographs are capable of detecting shifts corresponding to speeds of 1 m/s or equivalently, time dilations of 1 part in 300 million. X-ray spectrographs, which now routinely detect both the gravitational redshift and tranverse doppler effect in material circulating around supermassive black holes (though not in our own Milky Way) can detect shifts of about 1 part in a 1000.

There are three possible sources of redshift: peculiar velocities (relative motion), cosmological (expansion of space) and gravitational (light loses/gains energy as it travels from a strong/weak to a weak/strong gravitational field).

No cosmological redshift is observed here. Even though the space in-between us and the center of the galaxy is expanding, the distance doesn't change because gravity dominates, and holds everything together.

In short: ultimately we measure time using electronic transitions, which can be shifted due to gravity. This then changes the time we measure.

I have also wondered about this. I would think that anything happening next to a super massive black hole would have a time dilation much slower than ours. As time speeds along here relatively to there you would think that anything we observe there would appear slower. That being the case you would think it would be red shifted. On the other hand when your next to a black hole looking outward everything should appear to be blue shifted.

Not the answer you're looking for? Browse other questions tagged orbital-motion time-dilation speed gravitational-redshift or ask your own question.

8
Why is "gravitational" red-shift neglected in galaxy and galaxy cluster scales?
4
Do magnetic fields exist beyond the gravity of a black hole?

0
Red Shift Effects
3
Time dilation at zero velocity (and zero gravity)
0
Big bang red shift verification
11
What are the characteristics of light entering a disk spinning at near $c$?
1
Why do so many galaxies in clusters have a near zero velocity?
4
Does the density of a galaxy affect time?
0
Time Dilation question for a writing project
2
(How) does gravitational lensing affect red shift?
4
Time dilation due to space expansion
0
Hypothetical effect of Solar System/Orion Spur traveling near speed of light