Why the distance equation is not working while calculating distance manually?

I was wondering how the average velocity is the arithmetic mean of initial velocity and final velocity if acceleration is constant. So, my first part of the question: Can someone give me an algebraic proof of this?

Okay, so I moved on and thought maybe it was more of an experimental result, so I tried to do this: Lets suppose that an object is at rest, so its initial velocity is $0\ \mathrm{m/s}$. And lets say it starts moving with a constant acceleration of $2\ \mathrm{m/s}$ per second. And lets manually calculate the distance it will cover in $5\ \mathrm{s}$. The result is as follows:

But, if I use this equation instead:

Why don't these results agree?

In your first calculation, you're finding the distance travelled by an object that moves at a constant speed each second, and at the end of each second, instantaneously accelerates to a speed that is 2 m/s faster.

That's not the same motion as an object that accelerates at a constant, continuous rate of $2 ~\rm m/s/s$, and they won't go the same distance in the same time.

Here is a graphical comparison of the two different motions: 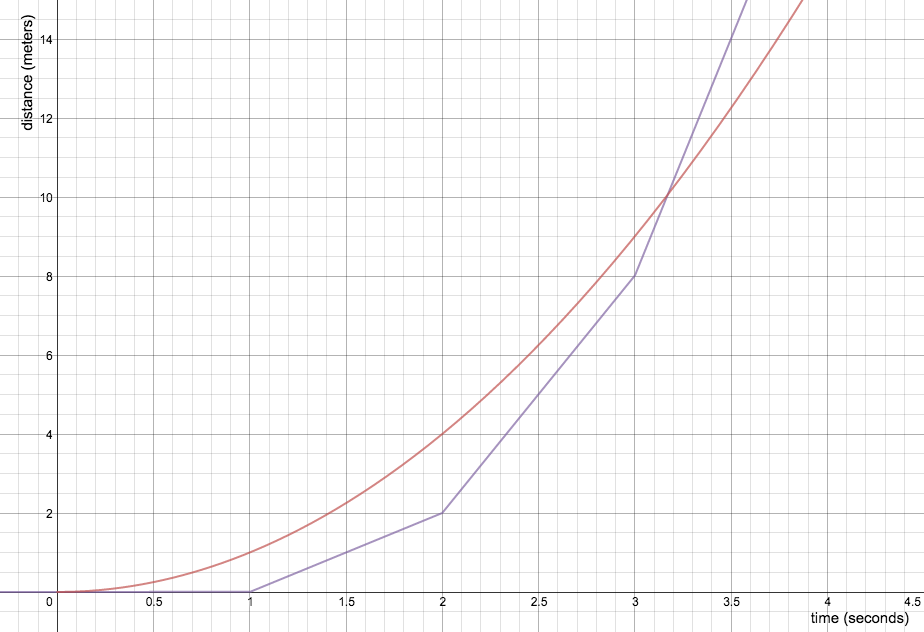 (here's a link to the live Desmos graph)

You might be interested to know that the first method you used is known as the rectangle method for approximating an integral, while the second method is exact.

There is a mistake in your calculation of the distance covered. At the end of the first second, the velocity is $2\ \text{m/s}$, but it has not been going this fast the whole time, so it cannot have covered the full two meters in the first second. Using the formula: $$\Delta x = \frac{1}{2}at^2 + v_0t+x_0$$ from kinematics, you'll see that in the first second, the total distance covered should be only 1 meter. The errors further compound from there. Using this formula, you should see that $\Delta x = \frac{1}{2}at^2 = 25\ \text{m}$

Not the answer you're looking for? Browse other questions tagged kinematics acceleration or ask your own question.

1
Acceleration: Value Disparity?
0
Simple Acceleration Problem throwing me off
1
Why do two formulas $d = v_0 t + \frac{at^2}{2}$ and $d=vt$ yield different results?
2
Acceleration of car. One dimensional motion easy problem
2
Get an idea of average velocity when you just know the distance covered
0
Which approach can I use to find the total distance travelled by the car?
1
Is it possible to estimate linear displacement using accelerometer & gyroscope with the kinematic equations of motion?