When reading about what happens when cosmic debris enters the earth's atmosphere, some sources say friction, others say compression. For example:

On space.com it says:

Meteor showers occur when dust or particles from asteroids or comets enter Earth's atmosphere at very high speed. When they hit the atmosphere, meteors rub against air particles and create friction, heating the meteors. The heat vaporizes most meteors, creating what we call shooting stars.

On the other hand Phil Plait writes:

What you’re seeing is not smoke, or burning particles. As a meteoroid (the actual solid chunk of material) blasts through the atmosphere, it violently compresses the air, heating it up hugely (note this isn’t due to friction, but compression; like when a bicycle pump heats up as you use it). The heat is so intense it ionizes the gases, stripping electrons from their parent atoms. As the electrons slowly recombine with the atoms, they emit light—this is how neon signs glow, as well as giant star-forming nebulae in space.

Basically, the supersonic object creates its own oven by compressing the air in front of it. Furthermore, if the object is made of an oxidizable material (such as iron, aluminum, or carbon) and the air is oxygen rich (such as the earth's atmosphere), then the object may quite literally burn up. So the next time somebody tries to tell you that air friction causes a meteorite to burn up in the atmosphere, be sure to correct them and tell them all about supersonic shock.

If you look at what happens when the space shuttle passes through the atmosphere, the atmosphere is not compressed overall, just heated. So overall the energy loss is through friction. On the way, however, a bit of energy is stored in compressed air before getting lost via friction in the air as it re-expands.

And finally a combination of compression and friction:

With the meteor moving at this speed, there is a lot of heat generated (compression, as well as friction/viscosity).

To me compression makes much more sense intuitively (but I might be wrong). But then at the same time, I am lacking the actual physics knowledge to demonstrate it myself. Here on SE Physics are some great answers on similar topics but they don't quite answer my questions. Maybe my questions cannot not as easily be answered, which would still be a valuable answer to me!

So, my questions are:

Q1: Taking an ideal object as an example (e.g. spherical, 1 m radius), which enters the earth's atmosphere, is it possible to roughly calculate the total amount of heat generated at a given height, and then quantify the amount of heat due to compression vs. friction? Say 80% compression and 20% friction (or 99% vs. 1%, or similar)? A ballpark figure would totally suffice!

Note: By adding the tag meteors, its description also says:

Pieces of stone or metal falling from space, made visible for part of their journey due to intense frictional heating.

No mention of compression.

Imagine a blunt object like a space-capsule entering the atmosphere. It experiences a decelerating force, right? If you divide this force by the surface area of the blunt front facing surface, we get an effective pressure. The atmosphere has to create this pressure in front of the object, otherwise there would be no force (a molecule streaming by the sides of the object without hitting it can't create such a force). This compression also heats the gas in front of the object.

The hot, dense gas now streams along the sides of the capsule. If we want to keep the capsule cool, then we certainly don't want this hot gas to touch the body again, which is why capsules are entering with the broad side and are not flying like planes with a sharp nose cone. The body angle has to be small enough that the gas can pass the entire body before it expands enough to reach the walls.

You can see these effects nicely in old NASA images showing the supersonic bow shock around models of their capsules, the dark areas are dense gas under high pressure, the light ones are less dense, low pressure regions: 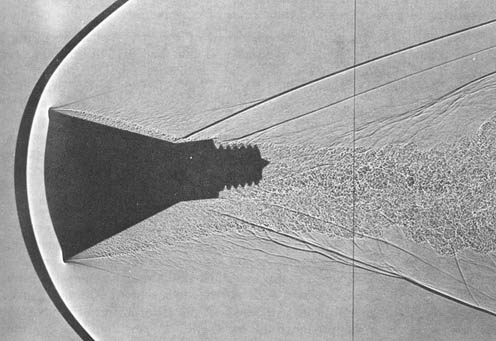 The majority of the kinetic energy in the capsule will be converted to heating of gas in this bow shock, only a fraction of it will be absorbed by heat shield and an ever smaller amount will heat the backside walls. Without this phenomenon re-reentry would be an even harder thermal problem than it already is.

For an object entering our atmosphere at high speed, there are two types of heat being produced, one from friction, where colliding molecules produce kinetic energy, and atmospheric compression, where perhaps several miles of atmosphere are compressed into a thin layer of gas in front of the object in less than a second. It is my belief that the vast majority of heat which creates plasma is a result of atmospheric compression of a very large amount of gas, rather than the friction of gas molecules colliding against the object's surface itself. Though friction plays a role, the heat- plasma- due to the compression of gas in front of the object is far more significant, at least at the typical velocities of objects entering our atmosphere.
Good examples of machines that raise the temperature of the gas by compression are a bicycle pump, as noted by others, and a refrigerator, which cools by first heating gas by compressing it, then by passing the heated gas through an expansion valve, then through a radiator, which cools the gas below its original temperature. Friction is not involved in either case, only compression. In other words, explanations of the super high heat of meteors entering our atmosphere that mention only "friction" completely ignore the reality of physics. So sad!

Not the answer you're looking for? Browse other questions tagged thermodynamics friction atmospheric-science drag meteors or ask your own question.

11
Why do meteors explode?

16
After what speed air friction starts to heat up an object?
2
How can anything be hotter than the Sun?
2
Air friction at supersonic velocities
4
Temperature of a falling meteor
2
Why do meteors heat up when they fall through the atmosphere?
1
Why Jet fighters don't heat up like spacecrafts?
2
What would happen if you drop two objects of the same shape and size but different mass in Earth's atmosphere?