Why does a light wave fade as it travels through space?

It stands to reason: if it didn't, the entire sky would be covered with stars shining blindingly day and night.

But what causes a light wave (or an electromagnetic wave) to fade if there are no celestial bodies in its way? Or, alternatively, why doesn't it fade sooner? Some stars are visible to the naked eye that are hundreds of light years away. Others, closer, can only be detected with the aid of a telescope. Why?

As the individual photons move away from a point they spread out so the same size telescope or eyeball picks up less of them as you move farther away.

There are more than two phenomena at work here (sorry HDE), in addition to just spreading out based on their initial direction individual photons can be 1. diffracted by moving into more dense space 2. reflected (by any object with a greater diameter than it's wavelength) or 3. absorbed... Especially after picking on him I must encourage everyone to upvote HDE for having a cool picture though!

There are two phenomena at work here: the inverse-square law and extinction.

Astronomical extinction is the absorption of photons by gas and dust spread throughout space. This can make observations difficult, because gas clouds and nebulae can easily block out most of a star's light.

In really extreme cases, a nebula or a related object will block out all the stars behind it. See, for example, Barnard 68, a molecular cloud: 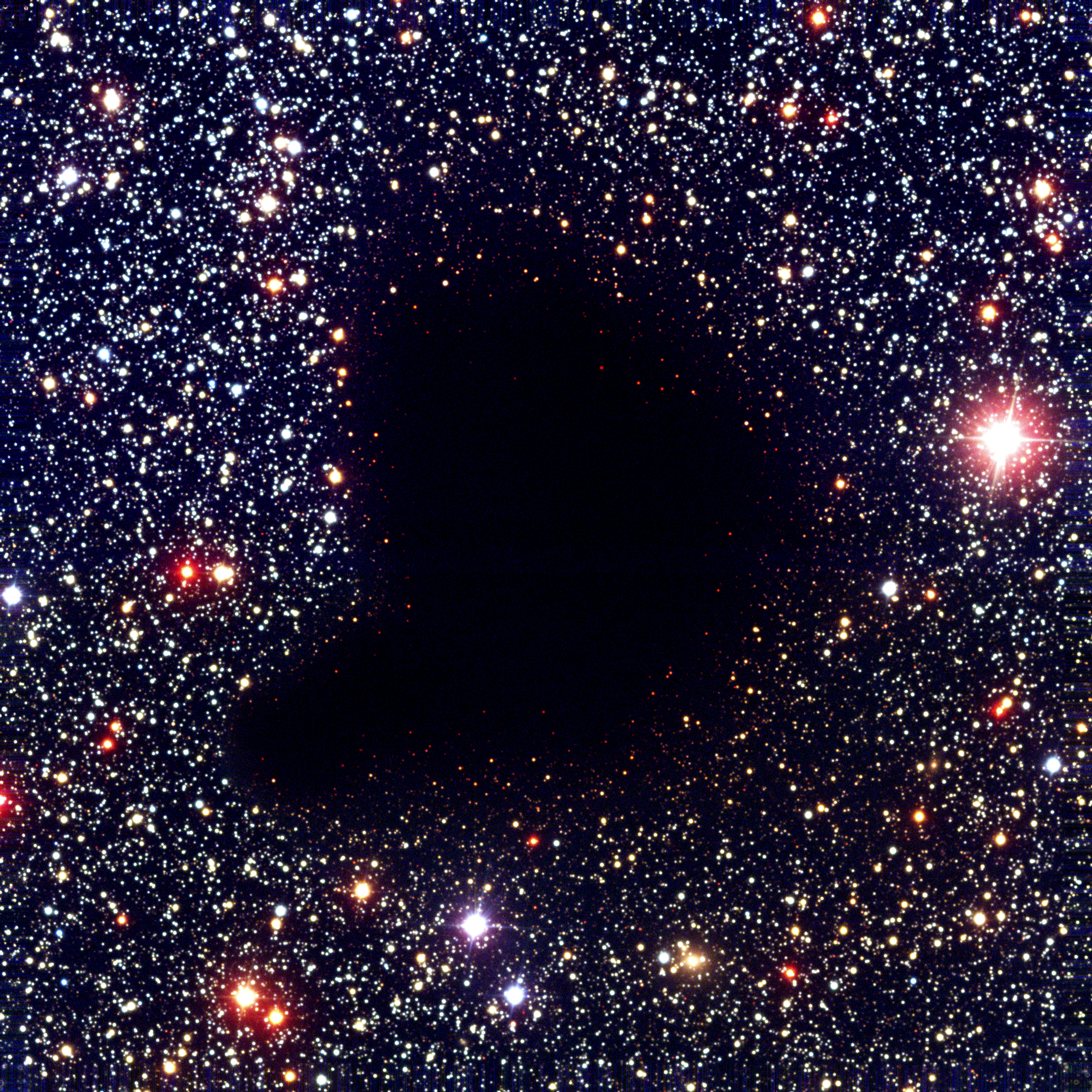 Basically, dust and other stuff cannot stop light for getting to us as an infinite sky filled with stars (which was dogma about a century ago) will eventually make even dark dust glow brightly.

The answer to your question is that light does not 'fade as it travels'.

Light from very distant stars is red - shifted - which I would not classify as 'fading'. So that makes distant things look dimmer.

The real answer though is that the Universe is finite in both age and size (and expanding) so that we don't see Obler's paradox.

Our Sun is a star. Stars are not all the same size and brightness. There are stars a million times brighter than our Sun, and a million times dimmer. So the bright ones show up from farther away. Astronomers had to account for being able to see brighter stars more easily when they started to calculate the abundance of different types of stars in the galaxy.

Not the answer you're looking for? Browse other questions tagged general-relativity visible-light space stars or ask your own question.

5
How does a photon lose intensity as it passes through space?

57
Why is the sky never green? It can be blue or orange, and green is in between!
1
Why does light fade from a room?
11
Of the 9096 visible stars — 90% are how close?
3
What is this big, white, dense, circular collection of stars in this picture taken from a Telescope? (See the image)
6
At any given point in the universe, are there a huge number of photons crossing paths?
22
A star or a galaxy?