Heat Losses from water pan due to vaporisation before boiling

I'm studying heat transfer from an electric heater to a cooking pan (Stainless steel) filled with water; specifically, my problem is related to water vaporisation, as I've already found good models to predict radiative and convection losses. The point is that vaporisation losses are easy to calculate after the water reaches the boiling point, as mass of water vaporised times enthalpy of vaporisation of water at atmospheric pressure (which is 2257 kJ/kg). But what happens before boiling? My experiments show that a considerable amount of water already evaporates starting from a temperature of 70°C. In fact, it is well known that water evaporates even at ambient temperature due to mass diffusion, and as the temperature increases the rate of evaporation is also increased. But since the water is not saturated, I guess I cannot calculate this loss by means of any enthalpy of vaporisation. How should I calculate the heat removed from the pan by the water molecules escaping from the upper surface at temperatures lower than boiling?

Thank you very much

If you don't have a lid on the pot, the rate of heat loss due to vaporization becomes extremely hard to calculate, because it depends on the relative saturation of the air at the interface, which depends on the details of the air flow. Tables have been published for rates of heat loss as a function of wind velocity; see for example my earlier answer on heating swimming pools for some details. This shows that the rate of evaporation strongly depends on wind velocity: you are familiar with the concept of wind chill of which this is one manifestation.

The actual heat per unit mass removed can be determined from tables of heat of vaporization as a function of temperature - see for example https://en.wikipedia.org/wiki/Enthalpy_of_vaporization from which I reproduce this figure: 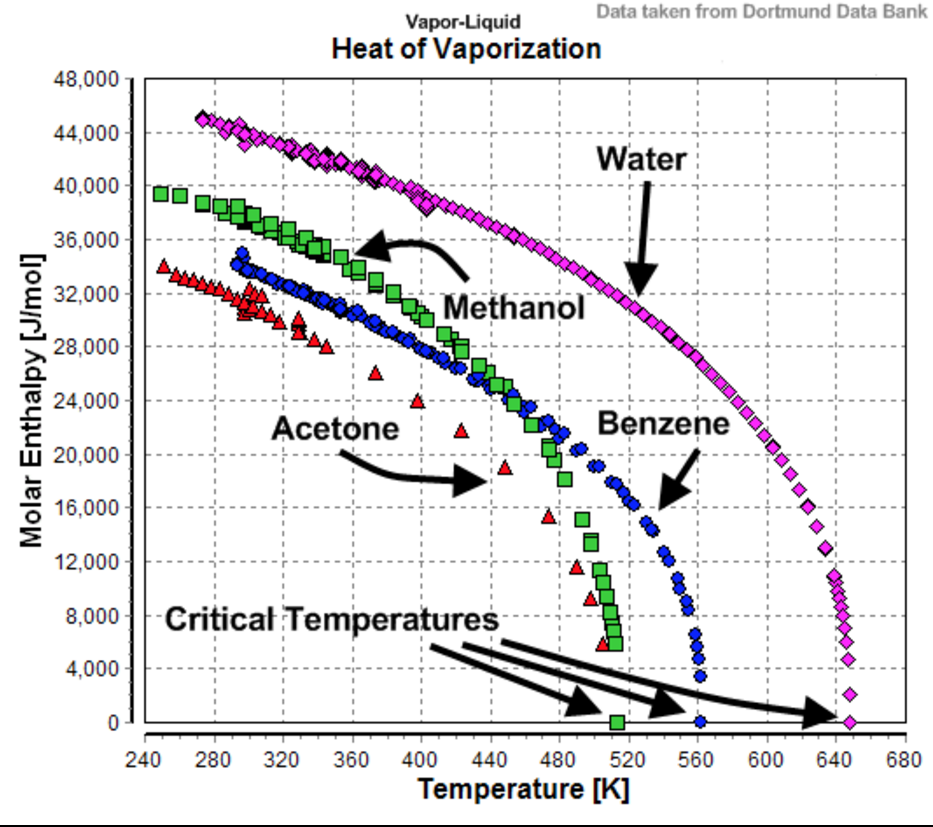 This shows a clear dependence of the heat of vaporization on temperature: not surprising, since you expect a molecule that escapes the liquid at a lower temperature to carry a relatively higher fraction of energy with it. I fitted (by eye) a straight line to the data between 260 and 360 K (roughly from freezing to boiling); the overlay (zoomed in) looked like this: 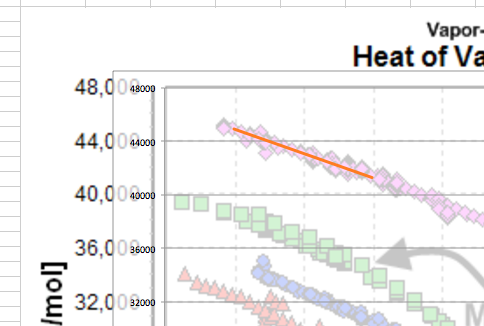 The coefficients of that straight line were

which gives a value of 2262 J/g at 373 K - pretty close to various published values. I recommend using this relationship to estimate the heat of vaporization at temperatures below boiling - it should be close. The main problem is knowing how much liquid evaporates, and that's much harder.

Not the answer you're looking for? Browse other questions tagged thermodynamics water diffusion evaporation or ask your own question.

0
How much energy would it take to maintain the temperature in my pool?

2
Heat of vaporization of water - dependence on relative humidity?
4
How do I predict volume loss due to evaporation when boiling water?
1
Heat loss from water surface heated in a room
0
How does covering a hot bowl of soup prevent heat losses?
4
Would water, given enough heat, instantly vaporize?
0
Confusion about energy taken to evaporate water with air instead of heat
1
How much heat is required to evaporate water
0
Enthalpy of vaporization of water and specific heat of water differences
1
Equation for enegy loss from evaporation/sublimation in vacuum?