The Lorentz-transformation can be deduced without any assumption on the speed of light, see https://en.wikipedia.org/wiki/Derivations_of_the_Lorentz_transformations#From_group_postulates.

This calculation leaves an undetermined constant $\kappa$, giving $L(v)=\frac{1}{\sqrt{1 + \kappa v^2}} \begin{bmatrix} 1 & \kappa v \\ -v & 1 \end{bmatrix}.$ Now let's calculate the eigenvectors. We don't need the eigenvalues, so we can ignore any scalar factor. We can assume that an eigenvector has the form $\begin{bmatrix}1\\ u\end{bmatrix}$.

Now we can interpret \begin{bmatrix}1\\ u\end{bmatrix} as an object moving with constant speed $u$. This special $u=\frac 1{\sqrt{ -\kappa}}$ is independent of the observer.

Experimentation and observation then shows that $u=c=\frac 1{\sqrt{ -\kappa}}$ is the speed of light.

In other words, giving an object a series of Lorentz-boosts will bring it arbitrarily close to the speed given by the eigenvector.

As Gyro Gearloose commented Plain theoretical special relativity doesn't state that the speed of light is the fastest possible. It initially merely states that there is some limit speed

And as Gyro Gearloose answered, basic isotropy and group structures linearity and such give a fixed form with an unknown $\kappa$ and its up to experiment to determine the value of $\kappa$. But experiments give a speed constant that seems really close to $c$.

But I also want to point out that you are correct. If we found out that the photons has a small but nonzero mass then light would have $c$ as a limiting speed, just like other massive fields.

it operates on the assumption that light is the fastest thing, doesn't it

If photons have mass, then we'd still probably call that limiting invariant speed the name lightspeed. Because different frequencies of light can get very very close to that speed. So red light and blue light might move at slower speeds, but there would still be a lightspeed that they get closer and closer to. It wouldn't be bluelight speed, or redlight speed (which would both be less than $c$), but it would be lightspeed.

The "light cone argument" is equivalent to the light-speed limit, it's a geometric way of demonstrating it. It's not an assumption, you can prove it from tha axioms of special relativity --

Suppose you had a train moving faster than light, and had headlights on it, or a glowing guy sitting on top of it, or whatever. According to a stationary observer (in our frame), the train is moving faster than light, and the speed of light is fixed, so the train is always ahead of the light it emits. But according to an observer sitting on top of the train, the train is stationary, and light still moves at the speed of light, so the light is always in front of him and the train.

It's easy to see why this is a contradiction -- suppose there was some kind of high-tech wall at the end of the train's path. It's programmed to create some sort of catastrophe if it's hit by a train, but only works in complete darkness. According to the stationary observer, the train hits the wall first, before the light -- so nukes go off across the world, his family dies, and he ends up drunk, radioactive and homeless. But according to the guy on the train, the light hits the wall first, so it switches off, and nothing dangerous happens -- he looks around, waves at the stationary guy, who's completely sober.

You can't have contradictions like this in the real world, which is why the only conclusion that can be made is "the faster-than-light train doesn't exist".

(Technically, that's not the only conclusion -- we made the assumption in our analysis that time runs in the same direction for both observers. If you're willing to forgo causality, you can, in fact, have faster-than-light travel. That's why causality and locality are typically treated as synonyms in relativistic physics.)

Bonus -- why we like to talk about light cones: an example

"But isn't the order of things relative anyway due the relativity of simultaneity and all that? How does that not lead to a contradiction?"

It doesn't lead to a contradiction, because disagreements about simultaneity only apply to spatially separated events, which cannot possibly be causally linked -- as long as you don't have observers moving faster than light. The full proof is here: Light cones and causality, here's a quick snapshot: 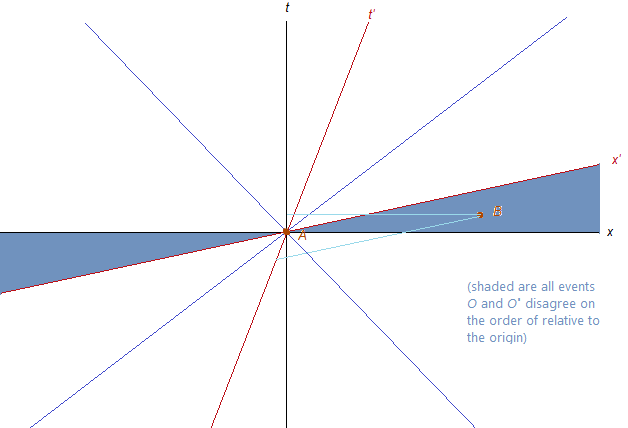 This is another (but equivalent) proof, by the way, of "no observer's axes can cross the light cone", or "no observer can move faster than light".

Using light cones to state that nothing can travel faster than light to me seems like a flawed argument.

I understand other reasons why the speed of light cannot be broken.

One of which ought to be the wave nature of matter. We can quite literally make matter out of light waves. Then we can diffract electrons, they have a definite wave nature, and waves have a speed. Saying that something made out of waves can't go faster than the wave speed sounds like a good reason to me.

However, it seems to me as if this light cone argument, i.e where nothing can travel faster than light otherwise it would be able to affect past events, doesn't make sense because it operates on the assumption that light is the fastest thing, doesn't it?

It doesn't make sense because there is no way you can move such that everything else not only moves back to where it was, but never moved at all. Time travel is science fiction. You cannot alter events. What happened happened.

That's essentially saying nothing can travel faster than light, because light is the fastest thing.

I'm not sure it actually says that, but nevermind.

Apologies if I'm misunderstanding the argument of light cones, but in short my question is: is this argument not flawed?

Not the answer you're looking for? Browse other questions tagged special-relativity speed-of-light faster-than-light causality or ask your own question.

323
Do we know why there is a speed limit in our universe?
13
What if photons are not the fastest particles?
10
What is the size of the world for a photon?
4
What's a better phrase than "speed of light" for the universal spacetime speed constant?
1
Is this a new derivation of Lorentz transformations?

5
Speed of light as a universal speed limit
8
Why can a particle have a nonzero amplitude outside its forward light-cone?
0
If causality reversal is an argument against velocities exceeding the velocity of light, can the same argument be made for sound?
0
Spacelike and timelike intervals confusion
0
Difficulty in understanding the three classes of events of light-cone