How to explain Doppler redshift of light?

For other waves like water or sound, it is easy to understand Doppler effect, because for those waves, the speed of wave in different inertia reference frames changes.

But for light wave, the speed is a constant regardless which inertia frame the observer is in.

Think about the following experiment. There are two inertia refernece frames:

Y: Moving away from X at a constant speed (zero acceleration)

A laser receiver is fixed to the stationary reference frame X, which can only be triggered by blue laser.

A laser emitter is fixed to the moving reference frame Y, which only emits blue laser.

For an observer in Y, he sees blue laser shining on the receiver, so he sees that the receiver is triggered.

But for another observer in X, he sees red laser (due to Doppler redshift) shining on the receiver, so he see that the receiver is not triggered.

How do you explain this paradox? What is wrong? If there is no redshift, everything reconciles. 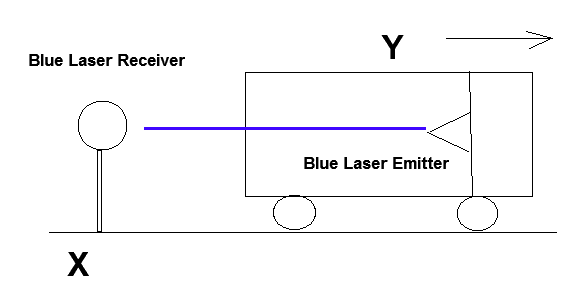 Your "paradox" is solved by noting that although the observer in frame Y believes he is shining a blue laser towards the switch, nothing happens. Your sentence "so he sees that the receiver is triggered" is incorrect. That is because, as you say, the light received in X is redshifted.

According to an observer in frame Y, the switch would need ultraviolet light to trigger it. i.e. Observers in different frames of reference would disagree on the required frequency to trigger the switch, though they could easily do the calculation to show that they did agree on the frequency as seen in the stationary frame of the switch.

Not the answer you're looking for? Browse other questions tagged visible-light doppler-effect redshift or ask your own question.

2
About the standard derivation of the gravitational redshift
3
Relativistic Transverse Doppler Effect
1
Doppler shift and special relativity
5
Redshift of merging black holes
0
How do you use the Doppler Equation To Measure the Speed of Sound?
1
How does conservation of energy explain the Doppler effect?
1
Doppler effect of light when it's windy
1
Intuitive Explanation for Doppler effect?