Why is the rod moving to and from?

These are tow pulleys, and a plastic plank is placed above them which can slide freely. The plank has uniform density and it touches both the pulleys. Both pulleys are placed on the same plane, and the rod lies on them horizontally. The pulleys can be rotated in such a way, that they wove in opposite directions with the same angular velocity. 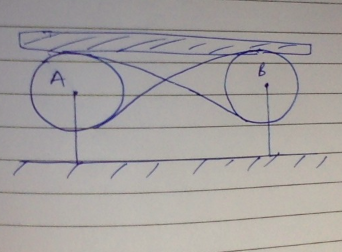 You can watch the video here, if you need more clarity of the question. http://www.youtube.com/watch?v=GlrreXLkzrk

These are two pulleys, and a plastic plank is placed above them which can slide freely.

That's a little misleading a way of putting it: there is definitely friction between the pulleys and plank.

Consider the figure below:

At the points of contact the pulleys exert forces $F_1$ and $F_2$ to ensure no movement in the vertical direction is possible.

Assume also that the centre of gravity of the bar is at $x=D$, then:

Both forces also exert a torque around the origin of $x,y$ and these torques need to cancel out:

The friction forces in the points of contact are given by:

It's now apparent that unless the bar is perfectly balanced on the pulleys, i.e. $D=0$, the frictional forces will always be different and the bar will accelerate in the direction of the largest friction force.

In general with Newton we can say:

Where $a$ is the acceleration of the bar.

Adding to Gert's answer. If you assume the bar starts of even $(D=0)$, rotating it either way would produce two perfectly equal forces. The bar wouldn't even move. Now, that's pretty much impossible.

In the case where you're rotating them anti-clockwise, the bar will tend to move in a way that increases $D$ :

Say $F_1$ is the strongest force. That means that the friction exerted by that pulley is bigger, and the bar will move in that direction. That pulley will also be rotating away from the other one, as you're rotating it anti-clockwise (it doesn't actually matters if it's anti-clockwise, that depends on which pulley you're rotating, it just needs to be away from the other one). Not sure if it's apparent to you, but it seems clear that the bar will move away from the pulley exerting less force, the center of gravity will be even less even until the bar falls.

When they're rotating the other way around, they'll be rotating closer to each other (Think of the points touching the bar. After a quarter spin they'll be touching each other. Rotating the other way around it will need 3/4.) The pulley that is producing more Force will tend to push it towards the other, making $D$ smaller and smaller until it pushed a bit too much and the other one wins, and thus the system is an astable oscillator. If you spun them towards each other really slowly you'd probably reach a point where the bar barely moves.

Hope that helps. I don't feel like formalizing the answer, but it should be understandable.

If you carefully observe the video you will see that in the first 2 cases the rod has been placed not exactly at the center, but a little off, this will, as anybody can guess puts uneven weights on the pulleys, so the pulley which has more weight offers greater friction and becomes more dominant.

In the third case he places the rod exactly at the center and it moves to and fro.

2
Motion of a rod struck at one end
1
Moving wedge and pulley system
1
If the force of friction is 20 N for a moving body does acceleration increase with the increase of the mass?
0
Why does the maximum speed occur when there is no acceleration when moving up the slope?
2
Why does a freewheeling flywheel counter-rotate slightly before finally stopping?
2
Why is an object still moving even if force applied is equal to friction?
0
What is the force of a wall on a revolvable rod?