It's about capillary rise of water

Capillary rise is due to surface tension of water and the angle of contact it makes inside the capillary i.e. since is forms a concave meniscus, the pressure above the meniscus is more than it is down the meniscus and so to equalise the pressure, the water rises in the capillary. But what about the water contained around the capillary. Since surface tension with act there too, there will be a meniscus formed . Like a half cut torus.(shown in picture, the dark color shows depth), so pressure above that surface will be greater than inside the torii meniscus too. Questions -

Will the water rise? If so, will a vacuum, even in smallest possible amount,be created at the bottom of the surface?

If the outside water doesn't rise,why shouldn't it?

If water rises ,will the water inside the capillary and outside capillary be in such equilibrium that there is no vacuum created at the bottom of the floor? 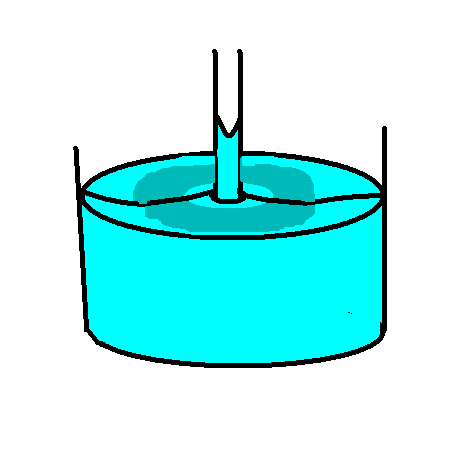 There is one fundamental misunderstanding in your reasoning. The water level in the beaker is completely flat for the majority of the width of the beaker, it is only curled upwards near the edge because of surface forces. The distance over which the glass can exert a force on the surface is rather limited. This distance is called capillary length and depends on the surface tension, density and $g$.

Only when the width of a beaker is small enough (i.e. a capillary), the surface remains non-flat, and hence you will observe capillary action.

Hence, the water in the beaker will not rise, but rather go down. The amount the surface level decreases in the beaker can be calculated from a simple mass balance.