Why does a stream of water behave like this when aimed against a spoon or into a glass?

I noticed while doing everything except the dishes that water behaves quite strange. These two things might be two different phenomenon, but the water acts in a similar way in both cases.

Spoon and water stream
The width of the water stream changes upstream from where I insert the spoon. Since the water molecules are moving towards the spoon at a fairly high speed it seems like no motion should be able to travel up the stream. Why does this happen?

Here's a video of me playing with a spoon in the kitchen sink: https://youtu.be/VQeXM4EDb-Q

Water stream into glass
I managed to get this to turn into a periodic thing using a water glass while also avoiding doing the dishes, half a year later. Once again, the stream widens, but it goes further, until it collapses into a small stream and repeats.

I'm holding the glass as steady as I could, and the frequency does not have anything to do with my hand movements. Also, the exact position of the stream into the glass doesn't matter that much. I played with this for longer than I want to admit.

Here's a video of me playing with a glass in the kitchen sink: https://youtu.be/NBdkOtIAn9Y

Why does motion in water seem to move upstream, and why did the oscillation happen?

What you are seeing is the result of pressure waves moving upstream against the flow of the water.

Pressure waves in a fluid move at the speed of sound (because sound is a pressure wave) and in water this is around 1.5 km/sec. So while the water itself is moving downwards the pressure change caused by hitting an obstacle can propagate upstream as long as the speed of the water flow is less than 1.5 km/sec. If you inserted a pressure gauge in the water where it leaves the tap you would see the pressure increase when you put the spoon in the stream of water. This increase in the pressure in effect inflates the column of water, and this gives the effect you're seeing in the video.

To actually calculate the effect and predict its magnitude would be a formidable problem because even simple problems in fluid dynamics can be computationally intractable. The usual tactic is to give up and reach for a finite element analysis program and a large computer. I mention this to give myself an excuse for not explaining why you get the pulsing effect in your second video. It too will be due to pressure waves travelling upstream, but exactly why you get the oscillation I don't know.

This answer above, and also this " Patterns in laminar flow of tap water " previous answer of mine, are both wrong;

So any influence caused by the speed of Sound in Water $1481 \text{ m/s}$ would affect instantly in this scale. The Water hammer is still most easy to understand from the Original formulation of Joukowsky; $\Delta p=\rho *c*\Delta v$ (Here $c$ is Wave propagation velocity). As Pressure is atmospheric, it's change is practically zero, which means that also velocity change should also be zero in this case. 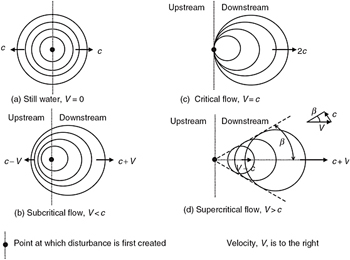 One possible explanation; (...NOT MAINSTREAM,-I am Sorry for the mainstream )
I have observed that Froude number $F=sqrt3=1.73$ still doesn't cause any losses in hydraulic jump; look the US Bureau of Reclamation experiment result in this picture; [Page 397, Fig 15-3, Open-Channel Hydraulics. Ven Te Chow. McGraw-Hill, New York, 1959.]
LOOK AT; USBR Experimental curve 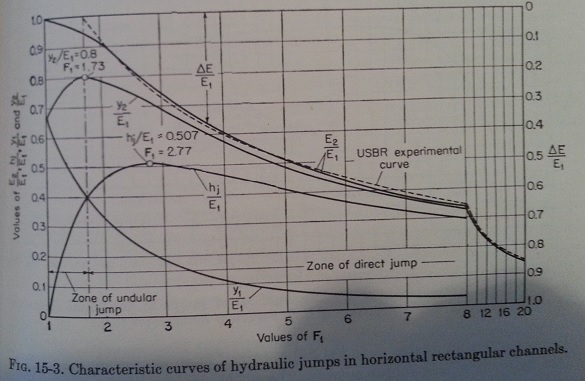 The Dashed curve is USBR-experimental Curve for $\frac{\Delta E}{E_1}$ relative loss, the continuous curve is the theoretical value. The most important observation of this experiment is, that the Energy losses are zero when $F<1.73$. The book doesn't point this out, but states;

It can be easily noted that $\frac{y_2/E_1}{y_1/E_1}=2$ which I interprete through my non mainstream idea about turbulence, that particles can hold together with any energy as long as they are properly colliding; $A_2/A_1$ ratio is $<2$, which in this case is also $y_2/y_1$ ratio. (Explained in book.) When the Ratio is $>2$ then the single molecules starts to push through. As simultaniously the continuous self-ionization of Water causes some $H_2O$ to loose their $H$ and creates $OH^-$ -ionen, while the free H is catched to $H_3O^+$ and then this molecules is pushed in away from their counterparts so that the normal Hydrogen bonding is disturbed;

And thus suddenly the $OH^-$ -ions have another $OH^-$ -ion as their neighbour and $H_3O^+$ has another $H_3O^+$ and as these then repels each other, the water (any fluid not single-atom-gas like $He$) suddenly has a surfaces or cracks inside, and it thus doesn't behave homogenously anymore! One of the main assumptions of solving these hydrodynamical problems mathematically is thus WRONG; as The Navier Stokes equations expects;

the solutions for the Navier–Stokes equations are searched in the set of solenoidal ("divergence-free") functions. For this flow of a homogeneous medium, density and viscosity are constants.

things wich are not correct, they actually can't give a single smooth solution for any Turbulence.

So the answer, which can be build thorugh this idea for this question, is that the molecules are building up around the Stagnation point a core which is enough strong that it can build up even the hights seen in the videos. The pulsating rythmus in the second video is caused by the collapse of this core, as the circulating flow in the glass pushes the bottom of the core to move.

If this is really so; I do not know for sure; But I could easily prove it with an experiment I have in mind. (I just dont have the needed equipment) Anyhow, the results of the labtests of my turbine supports this enough for my own satisfaction.

Not the answer you're looking for? Browse other questions tagged fluid-dynamics kinematics water home-experiment or ask your own question.

1
Why does an object when filled with water sink, but without water inside float (in a body of water)?
9
What does really attracts a water stream to a charged object?
1
Why bigger stream of water in a metal sink is more silent than a smaller one?
3
Why does water splash up?
2
Laminar Flow From Outdoor Faucet
3
Why does air get trapped below water pouring into a glass?
0
What happens when you hold a spoon in a stream of water?
10
Why does this ice cube rotate when it melts on a flat platform?