Why is rapidity additive?

With the rapidity $\phi$ defined so that $\frac{v}{c}=\tanh{\phi}$, say you have 3 parallel moving reference frames $S$, $S'$ and $S''$ with a constant but different velocity/rapidity.

I don't really see why this is the case, it's probably something really simple I'm missing because there's no further explanation in my syllabus.

1) the constancy of speed of light in all frames. This means that the rapidity of light $\tanh\phi_c=1$ is the same in all frames of reference.

The reason has to do with another constraint:

While looking into it again I've also found this simple solution to the problem.

From this, it's easy to find:

In a hindsight, here's another proof of rapidity being additive(without using velocity composition again). 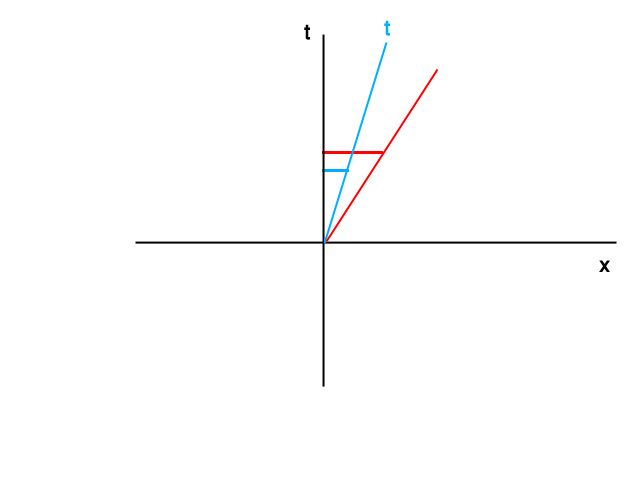 Consider this spacetime diagram in which the black axis represents $S$, the blue is the worldline of $S'$ and we also have another object in relative motion to both of them(the red one).

First, consider rotations in 2D. The analogous quantity to rapidity is $\theta = \tan^{-1}(y/x)$, and this quantity adds in successive rotations because it's just the rotation angle.

(Actually thinking about special relativity as having an imaginary time coordinate isn't very helpful, but it's an easy way to pop out formulas.)

Not the answer you're looking for? Browse other questions tagged special-relativity velocity inertial-frames or ask your own question.

9
Deriving the Lorentz Transformation
5
Lorentz force law in Newtonian relativity
5
Uniqueness of the equivalence class of inertial frames
0
Additive speed of light for three bodies
2
Wigner Rotation of static E & M fields is dizzying
17
How can I show that the speed of light in vacuum is the same in all reference frames?
1
Relativistic difference of angle between two inertial frame
0
Transformation of force under different types Galilean transformations
1
Relative velocities with the Lorentz transformation