Why are Killing fields relevant in physics?

I'm taking a course on General Relativity and the notes that I'm following define a Killing vector field $X$ as those verifying:

They seem to be very important in physics but I don't understand why yet because that definition is the only thing that I have so far. I'm not very familiar with the Lie derivative so I don't know how to interpret that equation so far.

What is the meaning of the Lie derivative of the metric being 0? Why are Killing fields relevant physically?

Killing fields are one of the most important concepts in general relativity both in its classical as well as quantum versions.

Classically, one thing we are always interested in is the world-line/trajectory of a free-falling observer in curved space-times. These world-lines are described as geodesics and satisfy the equation $$ \frac{d^2 x^\mu}{d\tau^2} + \Gamma^\mu_{\rho\sigma} \frac{dx^\rho}{d\tau} \frac{ dx^\sigma }{ d\tau } = 0 $$ where $\tau$ is the affine parameter along the geodesic.

Now, if $\xi^\mu$ is a Killing vector field, then it is easy to show that $$ Q_\xi = \xi_\mu \frac{dx^\mu}{d\tau} $$ is a constant along the geodesic, i.e. $$ \frac{d}{d\tau} Q_\xi = 0 $$ Thus. we find that every Killing vector field gives rise to a conserved quantity along the world-line of a freely falling observer. This fact can then be used to label geodesics. This is nothing but an instance of Noether's theorem at play in GR.

In quantum field theories, Killing vectors can be used to construct conserved currents (and therefore conclude existence of symmetries and all the hoopla that accompanies it). For instance, any local quantum field theory has a stress-tensor operator $T_{\mu\nu}$ that is symmetric and conserved. Using Killing vector fields $\xi^\mu$ we can define conserved currents $$ j^\nu = \xi_\mu T^{\mu\nu} $$ This current then satisfies various Ward identities, etc.

Bottomline - symmetries form the basis of almost all the physics that is done today. Killing vector fields are simply manifestations of symmetries in the context of general relativity.

Imagine water flowing steadily in a stream, steadily enough that the surface of the water never changes shape. The water forms a three-dimensional manifold $M$. Watching how the water moves over a period of $t$ seconds gives a diffeomorphism $\phi^t \colon M \to M$. If the current is carrying a diatom down the stream, and you see it at the point $p$, you know that in $t$ seconds it will be at the point $\phi^t(p)$.

The water sits inside Euclidean space, so we can measure angles and distances in the water. In other words, $M$ has a metric $g$. The flow of the stream can change angles and distances. As an illustration, imagine a tiny jellyfish floating down the stream. Right now, it's at the point $p$, and two of its tentacles are sticking out along the perpendicular unit vectors $v, w \in T_p M$.

As the jellyfish floats down the stream, how are the angles and lengths of its tentacles changing? The Lie derivative of the metric $g$ will tell us.

The velocity of the water at the point $p$ is described by a tangent vector to $M$ at $p$, so the velocity of water everywhere is described by a vector field $X$ on $M$. The velocity field $X$ doesn't change with time, because the water is flowing steadily. The number $$\mathcal{L}_X g(v, w)$$ is defined as the current rate of change—that is, the derivative at time zero—of $g(\phi^t_*(v), \phi^t_*(w))$. More generally, $\mathcal{L}_X g$ describes the way the flow of the stream is changing angles and distances.

Finally, what does it mean if $\mathcal{L}_X g$ is zero? It means that the flow of the water isn't changing angles and distances at all. The water is moving in a completely rigid way: it might as well be a sheet of ice sliding down a hill, rather than a stream. In a few seconds, all the diatoms and jellyfish stuck in the ice will be in different places, but the angles and distances between them won't change. The creatures will even be frozen in the same poses; the poor jellyfish will have its tentacles sticking out at right angles forever.

In physics, the stream $M$ is replaced by spacetime. A vector field $X$ with $\mathcal{L}_X g = 0$ describes a completely rigid motion of spacetime: a flow that doesn't change the spacetime intervals between events. The technical name for this is a flow by isometries.

In Minkowski spacetime, steady rotations, steady boosts, and steady translations in space and time are all flows by isometries, so the associated vector fields are all examples of Killing fields. In particular, if you're just floating through space without tumbling or accelerating, the "flow of time" from your point of view is a flow by isometries.

For another example, suppose you're in orbit around a star, so your world is well-described by a Schwarzschild spacetime. If your orbit is circular, the "flow of time" from your point of view is once again a flow by isometries. An extreme sport astronaut using a light sail to hover over the star without revolving around it will see a different "flow of time," and theirs is a flow by isometries too.

In general, a timelike Killing field describes a point of view from which the "flow of time" is completely rigid: the river of time is more like a glacier of time. A spacetime with a point of view like that is called stationary. From the examples above, we can see that Minkowski spacetime and Schwarzschild spacetimes are stationary. FLRW spacetimes, however, are not: no matter how you slice it, an FLRW universe is always expanding or collapsing, so you can't find any point of view from which the flow of time is rigid. Even down on Earth, I doubt spacetime is very close to stationary: if you've ever seen a sand castle swamped by the rising tide, you know the Moon's gravity is too strong to ignore, so our local spacetime is probably best described by some weird three-body spacetime involving the Earth, the Moon, and the Sun. This picture, if accurate, justifies the "river of time" imagery used by poets since time immemorial.

Killing field flows preserve shapes and sizes. That makes them generators of infinitesimal isometries. This connection to symmetry is one reason for their importance.

Imagine a drop of ink in a flowing compressible fluid. If the drop retains its size and shape then the velocity field of the flow is a Killing field in the neighbourhood of the ink drop.

This is an illustration from Penrose's Road to Reality: 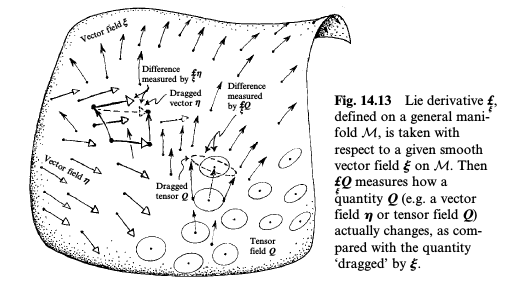 The last paragraph should be taken with a grain of salt, see https://physics.stackexchange.com/questions/225636/killing-fields-and-symmetries

I think the argument in the last paragraph is only valid for compact/closed manifolds.

An example can be found in static solutions of the Einstein equations (e.g. Schwarzschild). These solutions have "gravity" that doesn't change when time flow. So you can find a time-like vector field that is of Killing-type (and $t$ above can be a good parameter for your time).

There is another mathematical way of seeing its importance: The Noether theorem. You can see it in these lectures by Van Holten and Rietdijk http://arxiv.org/pdf/hep-th/9205074

If the Lie derivative of the metric with respect to a vector field $X$ is zero, then the metric is constant along integral curves of the vector field.

Killing vector fields are essential, for example, in defining what it means for a spacetime to be time-translation invariant. The formal term for a time-translation invariant spacetime is stationary, and a stationary spacetime is one which has a Killing field that is everywhere timelike (this definition can be extended to not require that the field is timelike everywhere, but we will not consider this case now).

In other words, in a stationary spacetime there is a set of curves along which the metric is unchanged, and these curves are timelike. This corresponds to the idea of time-translational invariance—we can move along certain timelike curves without changing the spacetime.

This is an answer that just addresses some of the mathematical aspects of the question, which you may or may not find useful.

A vector field $X$ on a manifold $M$ is an infinitesimal generator of an (active) diffeomorphism $\phi: M \rightarrow M$; in differential geometry this would be a section of its tangent bundle $X \in \Gamma(TM)$.

Now, I suspect that the physical relevance is this: general covariance is the suggestion that physically relevant properties are invariant under diffeomorphisms; but presumably not all diffeomorphisms count; we would need it to preserve the metric structure, i.e. it is isometric.

Then, that $X$, is a vector field generating such an isometric diffeomorphism, is understood when it is a Killing vector field ie $L_X g=0$.

Not the answer you're looking for? Browse other questions tagged general-relativity symmetry differentiation vector-fields or ask your own question.

15
When does a covariantly conserved tensor yield conserved quantities?