Angular momentum changes depending on orign

Consider the image below where we have two point masses $m_1$ and $m_2$ with different masses which are rotating around a fixed axis with angular velocity $\omega$. If the origin is placed on the axis between the masses (left image), then angular momentum vectors $L = r\times p$ are parallel with the axis and does not change upon rotation. Hence torque is zero. If we move the origin away from the line between the masses, the angular momentum of each particle does not lie along the rotation axis and the total momentum will neither lie along the rotation axis. Therefor there must be a torque present to change the angular momentum during rotation. So in one case there is a torque and in the other there isn't???

Of course the two systems are physically the same and the same forces must be acting so there must be an error in the reasoning. Where is it? 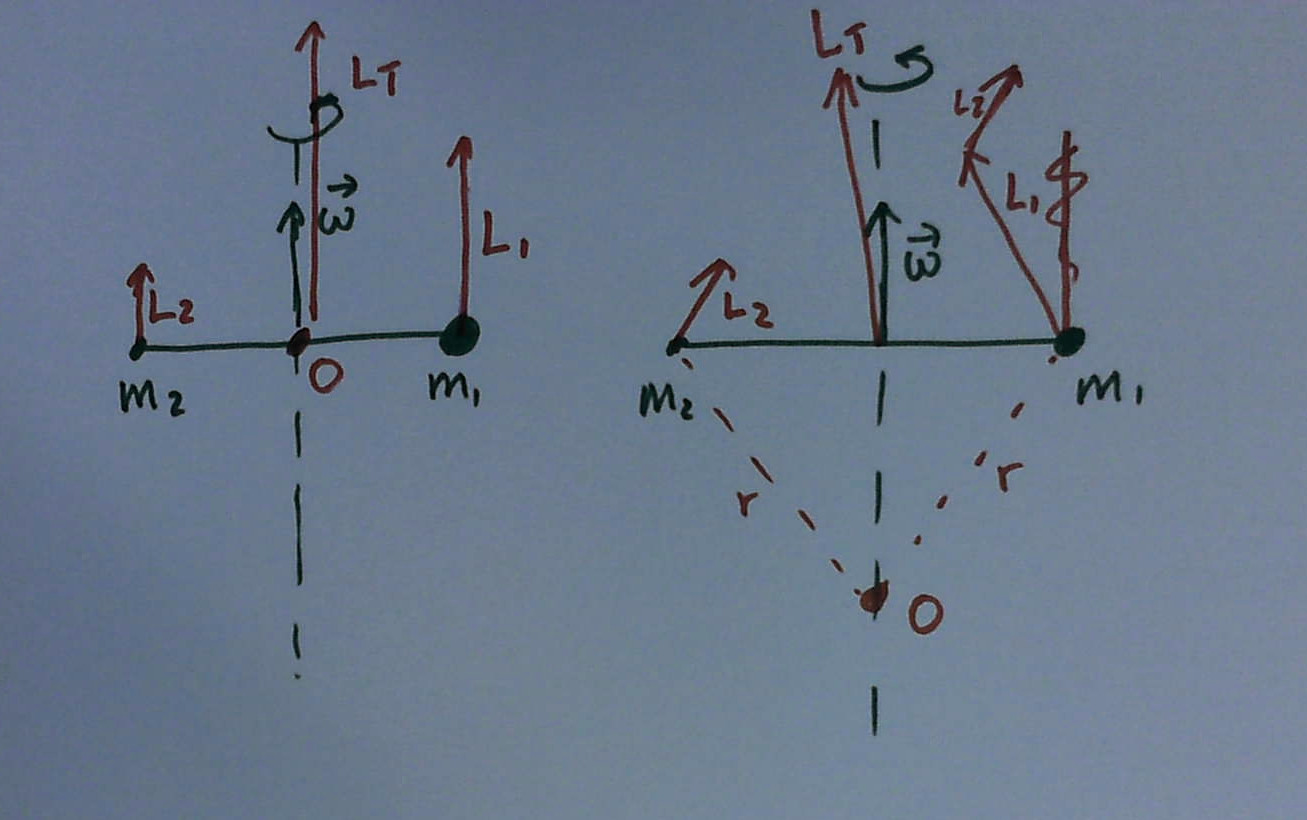 You are correct and there is nothing wrong with it. In many systems there is a "special" choice for the axis of rotation where you can make either $L$ or $\tau$ equal to zero, by choosing $r⃗$ to be parallel to the velocity or the force respectively. Another example: a mass moving along a straight line experiencing a force along the line. If you choose your origin to be on the line, both $L$ and $\tau$ will be zero, which will not be true if you choose an axis not along the line.

The calculation is correct but the conclusion is wrong.

We are looking at an isolated system : if the two particles "are rotating around a fixed axis with angular velocity $\omega$ it means there are no other forces acting on them besides the forces they exert on each other.

Now for each one of these particles, the torque does indeed depend on the point you compute it, since it is indeed $r\times F$.

But consider the system formed by the two particles together. The force on one particle due to the other one is exactly the opposite of the force on the second one by the first one. The sum of these forces is zero, and therefore the total torque on the system of the two particles is the same whatever point you compute it ! So if it is zero somewhere, it is zero everywhere.

That it is more complicated to compute the torque on each particle does not change the absolute fact that it will perforce be the same everywhere !

What you seem to be overlooking is the force imposed by the fixed axle, which acts in the direction of the lighter particle. When the origin is taken as the point at which the two particles are pivoting around the axle- as in your left hand figure- the force does not result in a torque. However, when the origin is taken elsewhere- as in your right hand figure- the force does result in a torque.

In order for the first system to rotate about $O$, a fixed point located along the line connecting $m_1$ and $m_2$ either

When you move the point of calculation for $L$ (let's call it $O'$) to a point along the axis of rotation (collinear with $\vec{\omega}$) at some distance $z$ from the plane of rotation. Either

Bottom Line: If there is a constraint in the rotation plane, there will be a torque about $O'$. If there is no constraint, then $O$ is at the center of mass.

Not the answer you're looking for? Browse other questions tagged angular-momentum rotational-dynamics reference-frames torque or ask your own question.