Why there is an extra componet of force in this Equilibrium state?

I have a question about the forces on a body at equilibrium. Look to this image:

here i draw a man standing with a pen on earth. And I think that I draw all possible forces on it. They are as follows:

I think that I mention every forces here. Due to the fact that the body in equilibrium, all forces must cancel each other. But there comes an extra component equal to the weight of pen. Where is my mistake?

Due to the fact that the body in equilibrium, all forces must cancel each other.

Which forces must cancel each other when a body is in equilibrium? 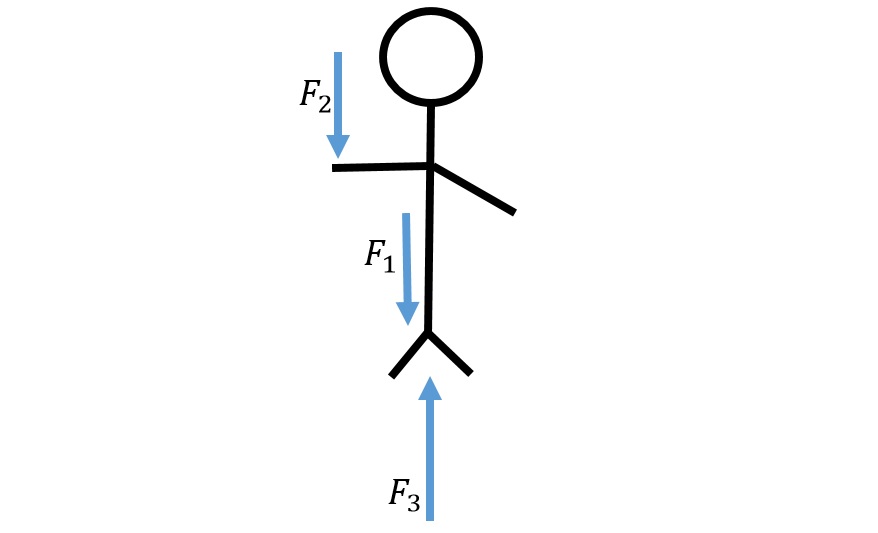 The forces are as follows:

First of all, you should at first learn to decompose all forces for all objects and after to put the interaction between objects/bodies/etc.Here you have three object:earth, pen, human. You also have some Normal Forces on earth used in the friction. For details here

"In mechanics, the normal force $F_{n}$ is the component, perpendicular to the surface (surface being a plane) of contact, of the contact force exerted on an object by, for example, the surface of a floor or wall, preventing the object from falling. Here "normal" refers to the geometry terminology for being perpendicular, as opposed the common language use of "normal" meaning common or expected. "

Not the answer you're looking for? Browse other questions tagged newtonian-mechanics forces equilibrium or ask your own question.

0
Lifting a weight and reaction force from ground

1
Calculating forces in a mass suspended by four cables
9
Where does the extra equation come from to determine the forces from an object on a table?
1
How is Magnetic force on a current carrying conductor $Blb$
3
Extension of Lami's theorem
0
Cannot this result be deduced?
2
Is this a valid proof of Archimedes' principle?
0
Why is the weight of object is not included as a force pushing an object down in fluid?
1
Which force component is $F_{N3}$ on figure (2)?