Are these reflected rays really parallel? 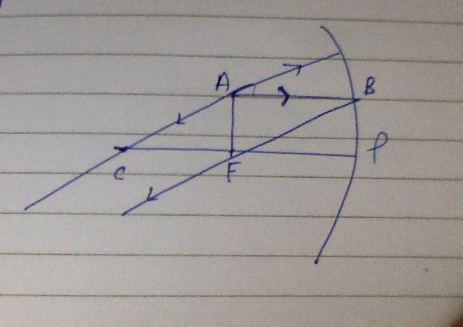 If the image is at infinity then $AC$ must be parallel to $BF$ . So let us consider that-

Now if they are not parallel , they must meet. Thus a image must be formed ( whether virtual or real ) .

So am I wrong somewhere or is the book ( and other books ) wrong?

If the book is well written, it will point out that such diagrams are approximations. Geometrically, the rays will eventually converge; practically, with a small enough curvature, the convergence takes place too far away to be relevant. At any rate, you'd only get a "no image" situation if your object was a point, which is also unrealistic, and spherically curved mirrors distort images in various ways. However, for the purposes of understanding the principles of optics, you may adopt the "sufficiently" approach: the object is sufficiently small, the rays sufficiently parallel, the reflector sufficiently flat or lens sufficiently thin, etc.

I am answering here your deleted questions, since I was writing the answer when you deleted the question.

How do the electrons know they have to emit in a specific direction?

When light rays come parallel to the principle axis in a concave mirror, after reflection they meet at the focus.

I have read that reflection is just absorption of photons and then releasing them, This is done by electrons.

Realize that when one goes to the level of electrons and photons one is in the quantum mechanical regime, and in addition it is a many body problem. Classical optics with its few variables, like reflection angles, optical path ... emerges from the underlying many body quantum mechanical interactions. An analogy is the way that temperature, pressure, etc in thermodynamics emerges from the many body interactions of the underlying atoms and molecules. The functions governing atoms and molecules ( even forgetting quantum mechanical interactions) are a completely different mathematical model than the thermodynamic functions which describe the behavior of materials. The classical thermodynamics functions can be seen to emerge from averages of the statistical behavior of individual atoms and molecules.

My question is how do the electrons know, that they have to release photons in that direction that it will pass through the focus? ( after all electrons aren’t stationary ) ?

Electrons are in orbitals around atoms ( probability loci) , and depending on the material even in bands. Each individual photon scattering off the field of these electrons has a quantum mechanical solution which characterizes it, that gives the angular distribution of the probability of scattering . In synergy off reflective materials the zillions of photons build up the reflected wave that will focus. Hand waving it means that in the zillions of solutions the probability for the photon to scatter so as to build up the correct reflection angles is very high. After all the focus means that the surface of your mirror changes geommetrically incrementally, and thus introduces different correct angles for the most probable scatter path.

Mathematically the emergence of the classical beam from the underlying quantum mechanical layer can be demonstrated within the theory of quantum electrodynamics. Keep this bookmark for when your learn QED.

0
Highly diminished image of an object placed at infinity
1
Problem in ray diagrams in convex mirrors
0
Image formed when two imaginary rays are extended to meet at a point
2
Why do light rays going to infinity form a real image?
1
What does it mean to say image is formed at infinity?
1
Can a convex mirror form a real image?
0
Formation of Image by Mirrors
0
If a point forms a point image in curved mirror then how do images of objects in curved mirror get magnified?
1
What will be the effect on the image formed by a mirascope if spherical mirrors are used instead of parabolic mirrors?