What's the explanation for the Giant Magnetoresistance effect?

I've been reading this review on Giant Magnetoresistance, and something about it is bothering me. The basic effect is that, using a special "stack" of layers (alternating between ferromagnetic and not magnetic) you can cause great variations on the electrical resistance of the material by applying a small magnetic field. 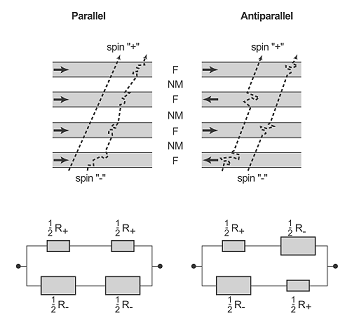 The explanation given both on the review and on Wikipedia is the following. The configuration on the left will cause scattering for all spin down electrons that cross it, but will present very low resistance for the spin up electrons (thus a small resistance overall). The one on the right, will scatter all electrons and thus have very large resistance overall.

Here's my problem (quoting the review)

How can this be? CIP in the above image would mean the current is horizontal, with probes positioned on the left and right of the middle layer. But, if you don't force the current to cross the ferromagnetic layers, why would there be an increase in resistance? I checked with a professor, and he confirmed that the standard method is indeed to apply the probes horizontally, but he couldn't tell why the effect still worked.

One option that came up is that electrons don't follow a straight line from one probe to the other, and thus they would still "flow" through the other layers, but I know that's not the case. Using the resistors analogy seen in the image above, applying a CIP is equivalent to setting the resistors in parallel for each of the spin orientations, and parallel resistors always have less (or equal) resistance than the weakest resistor.

To be clear, my question: How can the above explanation be compatible with the CIP case? If it's not, then why does it still work?

That's only true if the spacing between FM layers is large. In order for the current in plane configuration to work, the spacing must be less than the mean free path so that electrons traversing the device are scattered by adjacent FM layers. If the adjacent FM layers are anti-parallel, both spin up and spin down will spend some time in a high scattering region. If they are parallel, one spin direction will always see high scattering in the magnetic layers, while the other will always see low scattering. The latter is the low resistance channel that gives rise to the change in resistance of the device.

One page review for beginners like me at http://www.ornl.gov/info/ornlreview/v30n3-4/giant.htm

0
Why magnetic field lines and force are not orthogonal with magnets?
1
Field inside a wire?
2
Special relativity: moving charge and twisting bar magnet
0
Why will a 'Non-Electric Faraday Motor' which just uses permanent-magnets, not work?
0
Eddy Currents and Lenz's law
0
Giant Magnetoresistance (GMR), antiparallel magnetic moments, and north/south fields
0
Deriving the Electrostatic boundary conditions
2
Skin Effect Explanation
0
Intrinsic spin in a rotating frame of reference? Thought experiment get me confused, how to deal with this paradox?
6
Why is current in a circuit constant if there is a constant electric field?