What is the relation between control rods surface exposed into a nuclear reactor and neutron energy? Is it linear? I mean, how do neutron absorbing rate change with the progressive immersion of control rods into the core?

What is the relation between control rods surface exposed into a nuclear reactor and neutron energy?

You mention control rod surface. Why? Do you understand how control rods work? They're inserted into the core and absorb neutrons. Now, why would the surface be a metric that matters? Perhaps this was just the most obvious thing to you at the time, so let me get into the complications here.

Cross sections are higher at thermal versus fast energies. The fast and thermal neutron flux both matter a great deal for typical light water reactors. The main difference is that the average path length of a neutron (before interacting) is much longer for fast neutrons than thermal neutrons. Now, since we've made this distinction, we can ask if the control rods absorb a significant fraction of the neutrons incident on its surface. The answer is mostly "yes" for thermal energies and "no" for fast energies. See, because the thermal flux has a much smaller mean free path, it is much bumpier because of the presence of different materials, including fuel, moderator, and absorbers. It would be mostly correct to suppose that some significant fraction of a thermal neutron beam is absorbed after entering the control rod surface in terms percentage. As an order of magnitude guidance, it would be more than 1%. The same is probably not true for the fast flux. Furthermore, according to transport/diffusion physics, if you were to reduce the fast flux by a significant percentage, you would necessarily suppress the fast flux in the entire region of the core.

Anyway, let me address your question by saying that under the unphysical assumption that a control rod absorbed all neutrons incident on its surface, its reactivity contribution would be proportional to its surface area, relying on a few other assumptions as well. Notably, if you have too many control rods in the same small area they will depress the flux around each other so its not 100% valid. As I've already pointed out, this doesn't fit current reactors.

Let's look at the other extreme. Say, for instance, that the control rods absorbed a negligible fraction of the flux relative to the total flux. This is much closer to normal reactor conditions. In this case, the reactivity contribution would be proportional to the volume of the control rods times the local flux value, and this is shown mathematically in several nuclear engineering text books using perturbation theory.

Again, use perturbation theory and it's linear for small movements. But what does this physically correlate to? My answer is that it is with respect to the total amount of absorbing material times the local flux where it exists. This is because the control rods don't significantly affect the shape of the flux. In the thermal energies, however, this is a mediocre assumption, which is why people use actual computer codes to design reactors.

Let's speak of an isotropic neutron flux of a single energy. Then the flux will be of a certain physical shape $\phi(\vec{r})$ and the entire point of using the words "perturbation theory" is to refer to the assumption that $\phi(\vec{r})$ doesn't change with the insertion of the control rod. If the end of a control rod is at some given $\vec{r}$ in the core, then the change in reactivity due to movement of the rod will be $\phi(\vec{r}) N \sigma A \Delta l$ which will come out to units of $1/s$, representing the number of neutrons absorbed per second from the volume of the absorber element introduced. This affects the power of the core through a concept called the multiplication factor, which is how much the neutron chain reaction grows or declines for each neutron generation.

The absorber removes neutrons from the population that could cause a fission and thus create move neutrons, so it can be said to subtract from the numerator of that equation. The reactor changes flux (and thus power) over time as:

You need not concern yourself with the details other than the fact that inserting absorbers causes the flux to decrease over time.

I mean, how do neutron absorbing rate change with the progressive immersion of control rods into the core?

This is the most objective part of the question.

According to my prior arguments, the differential reactivity contribution depends on the flux value at the end of the rod being inserted.

So let me go back to the linearity question. The reactivity contribution from control rods is highly nonlinear with respect to control rod position, because the flux in the core changes dramatically with vertical position. AdamRedwine points out, correctly, that the flux is well-smoothed by core design, but that statement is specific to the xy-plane. This is not true for the z-direction, where it is nearly a cosine shape for a PWR, something else for the complicated thermal-hydraulic and neutronic feedback of the BWR.

Here is an example of a differential control rod worth curve. 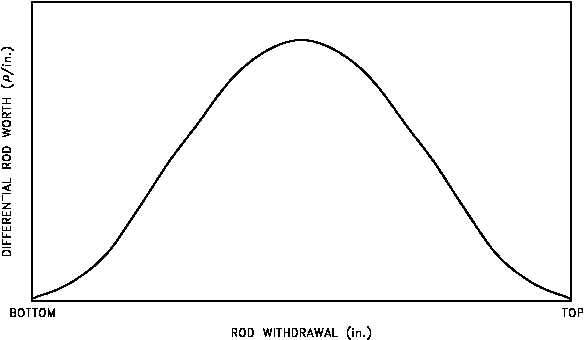 It is greater than zero at the top and bottom of the core because some neutrons do leave the core, bounce of Hydrogen, and then enter the core again to cause fission.

For any small control rod movement it's linear. Sure. That follows from the fact that the above graph is continuous. The fact also implies that the integral control rod worth curve is smooth.

I've left my reactor physics texts at work, but I'll at least give a general answer.

Nuclear reactor fuel loading is designed to keep the scalar flux as flat as possible. In other words, they try to avoid having the center of the reactor be much hotter than the edges. Because reactors tend toward cylindrical, you can usually work with horizontal cross sections when analyzing. When you insert the control rods, (bottom up for BWRs and top down for PWRs), you, more or less, insert them all the same distance; again, this is to keep the flux profile flat. In other words, as the rods are inserted, the neutron flux is reduced (absorption is increased) near the rods, but not in the rest of the reactor.

If you are asking just about how much of the neutron flux is absorbed by the rods, like any complex system, it depends. The amount of boron in the rods plays a part, as does the location of the particular rod under consideration. If you consider a single rod, with a known composition, in the center of a reactor, and wonder how much the flux is reduced by a move of $\Delta d$, it is close to linear. If that same rod is near the top or bottom, it is much less so. There is a graph of the integral control rod worth on page 51 of this reference.

Here is some additional information on the use of control rods in light water reactors. PWRs use "chemical shim" for general reactivity control; specifically boron is added to the primary coolant for absorption of neutrons, and the concentration of boron is gradually reduced as the reactivity of the core decreases during operation. In the PWR the control rods (inserted from the top) are only used for fine control. Chemical shim avoids the gradients in power distribution caused by the insertion of control rods.

BWRs allow boiling of the water in the core; water in the bottom and steam (actually two phase water/steam fluid) in the top of the core. Since the water is a moderator, during operation BWRs must insert control rods from the bottom (where the water is) to control the power distribution. BWRs do not use chemical shim.