Why are the jets of the “light saber” star slightly curved?

Why don't the jets of the HH-24 object follow a straight line?

In the image below, notice how they bend towards left from the expected straight line.

Is it an optical distortion, or some nearby massive object exerting a gravitational field? 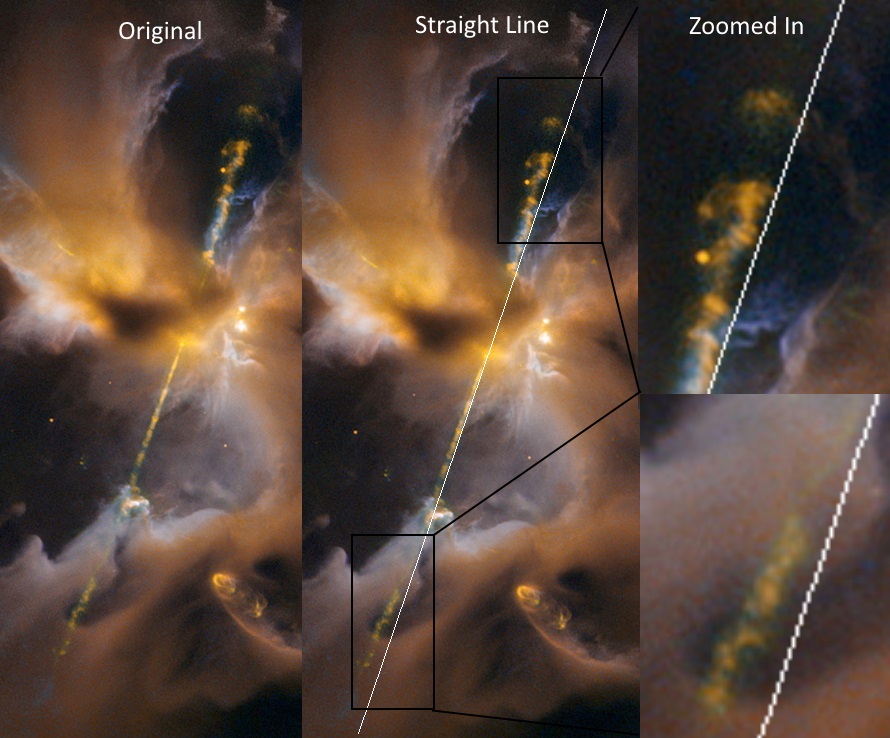 TL;DR: in this case the bends looks like interaction with the surrounding dense gas, either the jets are just running into dense material on the right causing them to bend back towards the left, or possible the star producing the jets actually has a slight relative velocity towards the right, and the jets (once they slow down at those larger distances) are starting to be dragged back towards the left.

There are many causes for these effects, and in general they seem to be better understood in the proto-stellar cases (e.g. Herbig-Haro [HH] objects), while in blackhole systems there is more uncertainty.

(note: somewhat speculative)
This looks very much like interaction with the ambient medium. You can see that the jet is clearly starting to clump/break-up from instabilities - which is a sign that it's been slowed down by the surrounding gas, and is starting to interact. It's always questionable to make 3D inferences from 2D images, but perhaps the high-density material to the right of the upper-jet is actually deflecting it towards the left (towards lower density). It's unlikely that there's a nearby-and-massive-enough object to be causing the deflection gravitationally (the jet is extremely narrow). Note that the 'bend' is similar on both the upper and lower jets, so it could be that the star is moving (slowly) towards the right, into that dense gas, causing the jets to bend back a bit (i.e. wind-resistance) towards the left.

Your question is very confusing and next time you should explain what your talking about with a better explanation. To answer your question though it's not the gravity of a nearby star, it's the fact that these light-sabers are a quarter of a light year long and they have been around for thousands of years and after that amount of time they can start to drift a little to one side.This is because there is always a plane of axis that has more motion than the other it might take a few thousand years but it will happen. Why do think all the planets in the solar system are going around the same axis? why is the solar system so flat?

Pretty picture, but your reference is full of misnomers and errors with a reference to "Star wars" to capture attention.

Young stars do not emit beams of light, they emit light in all directions. Some or most of the light, (or any other EM energy, or matter ["material falling onto a newborn star"]) may be blocked by debris, in a vortex, creating a beam effect. Although the geometric idea of a vortex looks perfect, in nature (think of a tornado) it is not perfect, so this vortex does not necessarily eject energy or matter ( yes, supersonic speeds are possible here ) in the exactly same direction all the time. so the matter can be scattered or curved as it appears in this picture. If it is energy, even light, it is not pointed at us, so it has to be reflected ( i use the term loosely ) towards us off matter that is not necessarily in the straight line determined by the beam, which has spread out some over the 1/4ly it has traveled.

Not the answer you're looking for? Browse other questions tagged astronomy astrophysics relativistic-jets or ask your own question.

10
Why are polar jets emitted along the axis of rotation?

7
Minimum number of atoms in star
5
Blandford-Znajek process: Why/how does the current flow along the magnetic field lines
20
Why don't stars in globular clusters all orbit in the same plane?
10
Why are polar jets emitted along the axis of rotation?
0
Why aren't Roche limit and the difference in gravitational acceleration the same?
7
Do gravitational waves impart linear momentum to objects? (e.g. Quasar 3C 186)
0
Why does relativity affect relativistic jets?