Why current loses its energy?

Can someone explain or give a link to explanation why current loses its energy? For example in simple circuit with lamp. I understand that the energy is spent for heating and lighting. But how exactly it happens? What's difference between electron that has energy and that has not?

For an electrostatic field, there must be no work done for a loop that is, $$\int_\text{loop} \mathbf E\cdot d\mathbf s= 0$$ which is implied by Stokes' theorem as $\text{curl} \;\mathbf E= \mathbf0$ & which further proves that electrostatic field is conservative. Now, being conservative implies, there can be only single value applied to a certain coordinate.

So, the electrons must dump energy, which they receive while starting from the cell, prior to returning at the same place that is at the battery site.

Let's see how charges dump the energy they get from emf site:

Between the collisions, charges gain some momentum & thereby some increment of kinetic energy as they drift in the direction of the field.

Due to collisions, they are redirected to random direction without the kinetic energy being restored to the initial value. So, the charges have to transfer kinetic energy to the obstacles they collide with. Since, the charges, being electrons, have negligible mass compared to the other neutral atoms, they begin to acquire extra energy until its average loss of energy in a collision is equal to the amount gained between the collisions.

In this way, the electric field by driving the charges in the direction of the field first 'heat up' the charges which eventually get passed to the rest of the medium as random kinetic energy de to collisions.

Edit: How does energy propagate in a steady-current circuit:

The energy neither does go through the wire, nor it is like that each electron carry energy & dump it at the resistor.

Energy does interact with the charges from the electromagnetic field surrounding the wire.

Feynman explains it as:

We ask what happens in a piece of resistance wire when it is carrying a current. Since the wire has resistance, there is an electric field along it, driving the current. Because there is a potential drop along the wire, there is also an electric field just outside the wire, parallel to the surface. There is, in addition, a magnetic field which goes around the wire because of the current. The $\bf E$ and $\bf B$ are at right angles; therefore there is a Poynting vector directed radially inward. There is a flow of energy into the wire all around. It is, of course, equal to the energy being lost in the wire in the form of heat. So our “crazy” theory says that the electrons are getting their energy to generate heat because of the energy flowing into the wire from the field outside. Intuition would seem to tell us that the electrons get their energy from being pushed along the wire, so the energy should be flowing down (or up) along the wire. But the theory says that the electrons are really being pushed by an electric field, which has come from some charges very far away, and that the electrons get their energy for generating heat from these fields. The energy somehow flows from the distant charges into a wide area of space and then inward to the wire. 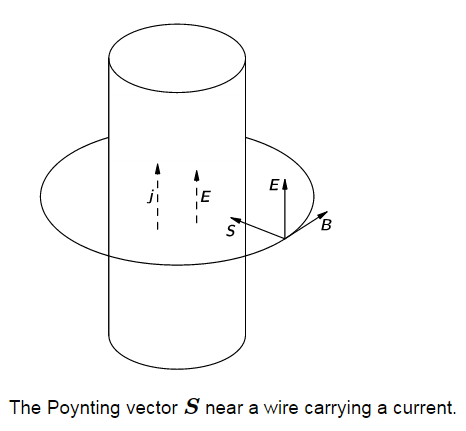 in simple circuit with lamp. I understand that the energy is spent for heating and lighting. But how exactly it happens? What's difference between electron that has energy and that has not?

You seem to be saying that electrons carry energy to the lamp filament and dump it there before continuing their journey around the circuit.

That may be a misconception.

Some books teach that, in a simple battery/bulb circuit, each electron carries energy to the bulb, deposits its energy in the hot filament, and then returns to the battery where it's re-filled with energy. This is wrong.

electrical energy is composed of waves traveling along columns of electrons inside the wires, and the energy itself is contained in electromagnetic fields connected to those electrons. We find that it travels as wave energy, that it exists only outside of the wires, and most importantly, that it travels one way along both wires on its trip from the battery to the bulb.

Energy flow, from battery on left to light-bulb filament (or resistive load) on the right.

- "IN A SIMPLE CIRCUIT, WHERE DOES THE ENERGY FLOW?", William J. Beaty 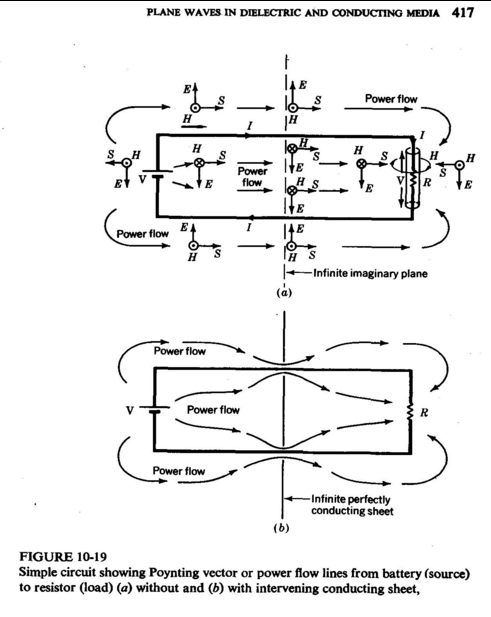 For example in simple circuit with lamp. I understand that the energy is spent for heating and lighting. But how exactly it happens?

The MIT Teal project has an excellent short video which can be used as an animated diagram of the (Classical physics) process inside a resistor such as a tungsten filament.

In the video below, imagine that the vertical field-lines are extending from the ends of the resistor located far above and below. This field was set up when the battery electrically charged the two connecting wires, and so caused the ends of the tungsten filament to become charged pos and neg, and produce an e-field inside the tungsten.

The video shows one of the metal's mobile electrons being accelerated downwards. As this occurs, the net e-field flux becomes less, collapsing inwards slightly. In other words, the electron is taking energy out of the overall e-field, and using this energy to accelerate. In this situation the e-field flux is the stored electrical energy; energy which had earlier been sent to the filament from the battery. We're watching the electrical energy decrease, and the velocity of the electron increase.

Not shown is the later collision, where the electron interacts with a tungsten atom inelastically, becomes partly or entirely halted, and leaves the tungsten atom vibrating. (Well, actually it interacts with a large section of the tungsten crystal lattice, and not with just one single atom.) Next, imagine this happening over and over: the electron speeds up, smacks an atom and halts, only to be accelerated yet again. Imagine many electrons doing this.

During the process the overall e-field is becoming weaker and weaker as many electrons move downward, pulling the flux down with them as they go. However, the battery (being a constant-voltage source) will detect this as a lowering of the voltage at the two ends of the tungsten. In response it produces a current in both connecting wires which again increases the charge-imbalance at the filament ends. The filament voltage is restored.

If this energy-deposition process was in the video, we'd see more e-field flux coming in from the sides, compressing the flux which was already there, and restoring it to the value it had before the electrons moved downwards. Ha! Teal project has an appropriate vid! Below we see a lone electron sitting in the tungsten filament, but with no battery connected. Then we apply battery-voltage to the filament, and in a fraction of a nanosecond the battery-provided e-field comes pouring in from outside of the metal, compressing the electron's flux-pattern...

Extra e-field invades from outside the tungsten

This shows that, although electrons move inside the metal, the electrical energy which drives them is coming from the space outside the metal.

(Note that both these videos contain a repeating cycle, where everything reverses. We only want the part of the video where the electron goes downwards and the field weakens. And, in vid-2, the part where the extra e-field comes in from the sides, increasing the overall flux. Ignore the backwards parts of both vids.)

We can imagine flow of current to be the flow of electrons through the conductor, the motion of which is directional and inherently different from the Brownian motion of electrons.

Now almost all materials, that we know of,always try to oppose the free flow of these electrons. Some materials like copper oppose less, while others like paper, oppose more.

In the electric bulb, the part that glows brightly is called the filament. That is actually the part of the bulb which does oppose the flow of current.

How exactly can we think of this at the atomic scale?

A good picture would be to try and imagine the electrons as balls bumping around with the molecules of the filament. More they hit the atoms, more they loose energy. Now this energy is absorbed by the atom in the filament, which causes excitation of its bounded electrons.

Since the energy of electrons is quantised, the electrons goes into an excited state. Now the excited state of the electron is not very stable, and it prefers to come back to its original state. So,it looses some of its energy in the form of photons which we see as light.

Not the answer you're looking for? Browse other questions tagged electric-circuits energy-conservation electric-current electrical-resistance dissipation or ask your own question.

5
Path of EM wave propagation in a circuit wire

0
What does Potential Difference between a load/resistor mean?
0
Voltage and Current
0
Why does an electron lose all of its energy in a resistor?
0
Energy dissipation in current flow
1
Doesn't Joule's Law of heating suggest that all the potential energy supplied is converted to heat in a resistor
2
What is the relation that links .m.f., current and electrons flow?
1
Free electrons in materials with high resisitivity
0
How much current goes through an ideal wire?