About the uniqueness of the displacement current

But surely that is not the only constraint.

If we take this to be the value of $\vec{J}_d$, then Ampere's law becomes

Consider a circumstance where the electric field is constant ($\frac{\partial \vec{E}}{\partial t} = 0$) and there are no currents ($\vec{J} = 0$). Your modified Ampere's law predicts that

The other answers say some interesting things about the consequences of this term, but the biggest reason it's not there is that all experiments have confirmed Maxwell's equations as we know them, and there is no evidence that a modification would be necessary.

After all, the equations are not unique: for example, they could easily be modified to include magnetic monopoles and they would be made more symmetrical. But nobody has ever seen a magnetic monopole, and so they don't appear in Maxwell's equations.

"Look around, and you will probably see numerous electronic and optical gadgets, such as mobile phones, personal digital assistants, laptops, TVs and digital cameras. These may all do different things but they have one thing in common: in the electronic circuits that drive these devices, charged particles flow through components and impart power via what is known as the conduction current. But is the motion of charged particles the only current we have available?"

Why, then does $\vec{J}_d$ has the form it has and not any of the other possible solutions presented above?

Because of what displacement current is. Maxwell effectively worked backwards from Ampere and conduction current, and ended up saying "light consists of transverse undulations in the same medium that is the cause of electric and magnetic phenomena". When people read this they tend to think of sinusoidal E and B waves: 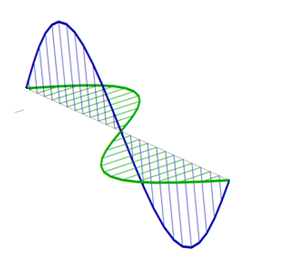 However that doesn't go far enough either. See the Wikipedia electromagnetic radiation article:

"Also, E and B far-fields in free space, which as wave solutions depend primarily on these two Maxwell equations, are in-phase with each other. This is guaranteed since the generic wave solution is first order in both space and time, and the curl operator on one side of these equations results in first-order spatial derivatives of the wave solution, while the time-derivative on the other side of the equations, which gives the other field, is first order in time, resulting in the same phase shift for both fields in each mathematical operation."

E is the spatial derivative of the wave, and B is the time derivative. So the real wave is the integral of the E and B sine waves. I'll illustrate this with a canoe analogy: imagine you're in a canoe as a ten-metre ocean wave* approaches. Your canoe starts to slope upwards, slowly at first, then faster, then the slope starts to flatten out, and your canoe is momentarily horizontal on the top of the wave. At this point displacement current is at a maximum, at the mid-point of the E and B sine waves. Then the process is reversed, something like this: 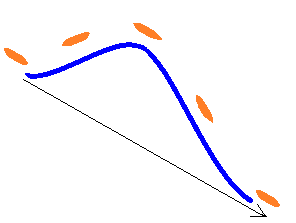 The slope of your canoe denotes E, and the rate of change of slope denotes B. One is the spatial derivative, the other is the time derivative. The displacement current is represented by the current of water that lifted you bodily up ↑ by ten metres, then let you down ↓ again. It has a vector nature, and the |direction| is the polarization direction. We write it as:

Adding a constant k would be like repeating the canoe scenario in deeper water. The wave is 10m high, so the deeper water won't alter the tilt of your canoe or how high you go. You can't add something to one side of the expression because each side is telling you about one aspect of the wave, and you can't change one side without changing the other.

17
Was Maxwell's displacement current the only way to fix up Ampère's Law?
1
Is 'Curl of magnetic field in electrostatic is zero' only empirical?

13
Does existence of magnetic monopole break covariant form of Maxwell’s equations for potentials?
5
Interpreting the inhomogeneous wave equations for $\vec{E}$ and $\vec{B}$
3
Problem in derivation of nonlinear optics wave equation
8
If Ampere's law implies the Biot-Savart law, which implies Gauss's law for magnetism, does that mean Maxwell's equations are redundant?
3
The strange character of operator $\nabla$
17
Was Maxwell's displacement current the only way to fix up Ampère's Law?
0
Changing the partial derivative to the total derivative in Ampère-Maxwell's Law
0
How large is the fusion plasma dielectric constant? Why does this mean radial current cannot exist in a tokamak?